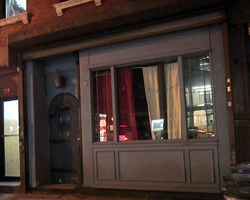 1) East Village: EV Grieve confirms that Duke's, the bar on Avenue C, has closed their doors. Signage has already been removed and workers have started dismantling the bar. [EBG]

2) East Village: EV Grieve has a picture of the 'Out of Business' sign on King Gyro's door. [EVG]

3) West Village: Even after there were signs posted that The Pink Tea Cup was simply moving next door, The New York Times reports that the restaurant will not be reopening in the Village. The owner is however still hoping to open a Pink Tea Cup in Harlem. [NY Times]

4) Tribeca: A tipster writes that Biddy Early's last night will officially be this Saturday. As we wrote back in November, it will be replaced by Woodrows which will offer a more family friendly atmosphere. [Tipline]

5) Hell's Kitchen: From the tipline: "Looks like an old reliable cafe in my neighborhood has bitten the dust. The Coffee Pot on the corner of 9th Avenue and 49th Street had been closed for about a week with no sign on the window, then I walked by yesterday and saw a sign posted that said "We are closed forever. Thank you for everything." Also, there was a large sign that said "Public Auction" in the window, but there was no further information on that sign. It's a sad development because they were one of the few non-chain coffee shops in the area and they were always friendly and quick. They also served fresh bagels from H&H, which was a lot more convenient than schlepping to 12th Ave to the H&H factory/shop. I'm afraid the space is going to be filled with some awful chain restaurant, or yet another Thai place which the neighborhood is flooded with." [Tipline]

6) Union Square: Also from the tipline, it looks like Pita Joe's on 14th street has closed for good. A sign saying 'Closed for the Holidays' is still up and their phone line has been disconnected. [Tipline]