Sommelier Laura Maniec on the Creation of Corkbuzz

Share All sharing options for: Sommelier Laura Maniec on the Creation of Corkbuzz 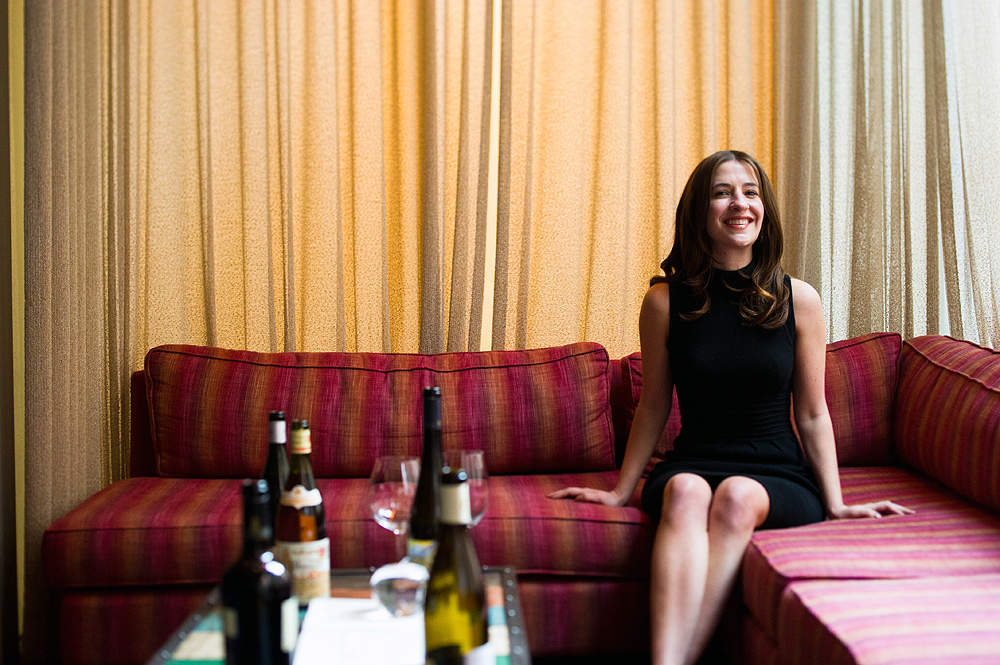 Master Sommelier Laura Maniec spent ten years working with Steve Hanson's BR Guest group before deciding to strike it out on her own. Her original idea was to create a wine education center, but in the planning stages, the project morphed into a combination restaurant/bar/wine school/event space. Now that Corkbuzz is open, Laura is both working the floor and teaching the classes. We recently chatted with Maniec about the opening, and what's it's like getting a table there on a busy night.

What's the busiest time of the week? Laura Maniec, Proprietor and Sommelier: I would say Wednesday and Thursday. It seems to be busier during the week, although it's hard to tell. This last Friday it was super busy — at 7 o'clock, almost every seat was full and we had a 45 minute wait, and we had all three rooms going. I was super grateful.

Tell us about some of your favorite customers. We have a lot of neighborhood regular guests, and they've been really fun. They get excited because the wines by the glass change almost every night. We get a lot of sommeliers and a lot of people in the industry coming by to check it out. That's been nice — it's like throwing a big dinner party and having all your friends here.

This seems like a good location to catch the industry crowd. A lot of people have been saying that there's no place in the neighborhood just to go and catch a glass of wine and have some really great food. Obviously, there's the classic, great restaurants like Gramercy Tavern and Gotham Bar & Grill, but you have to do that as an experience — you can't just drop in and have some hamachi crudo and a glass of Sauvignon Blanc. We have guests that drop in have a bite and leave, but then a lot of people order a few shareable plates and a couple of glasses of wine or a bottle, and stay longer.

How did this project come together? So, I worked for Steve Hanson for ten years, and about two and a half years ago, I started thinking that I was going to open a wine school. I really wanted a place where people could just drop in and take a wine class, but I didn't want to have a school with certification or where you had to sign up for 18 weeks of classes. So, originally I thought, "Okay, I'm going to do a lofted wine class type of space." I didn't think I was doing a wine bar in a 25,000 square foot space. So, I started meeting with my uncle, who is a business mentor to me, and I was telling him my ideas. Once a week I'd go to his house and he'd just help me with the business plan, and it started like that. And about halfway into it, he was like, "This is a great concept. I really want to be involved." He's a retired owner of a software company, so he was like, "I have a lot of business experience, and obviously you have restaurant and wine experience, so maybe we should do this together."

So, we became partners, and then we started looking at spaces and started meeting with investors. They said, "Well, I don't really understand completely what you're doing, because you're going to open a wine school, teach people about wine, and then you're going to send them on their way to drink elsewhere?" I was resisting the urge to open a wine bar, because I thought there were too many. But when they said that, I was like, "You're right. I've just taught you about Barolo, and now you're kicked out, and now you go and drink a glass of Barolo somewhere else after class." So, that's kind of how the wine bar/event space morphed together. I left BR Guest in August of 2010, and then we signed a lease in May and opened on November 26.

How did you find the chef? I was consulting for Niko, and I was talking with Marina, who is one of the chefs there. I said, "I really need a chef, but it's not for six months." And she was like, "When do you need her? This girl Hayan Yi, you have to meet her. She should be the chef." So, we met and we clicked instantly, we did a couple of tastings, and that was that.

How is the experience of working the floor here different from working for Steve Hanson? I always love working the floor. I always love the one-on-one with the guest, but also hosting people. I've always been a front of the house person. And actually, when I was working for Steve, it was more corporate — buying wine for 25 restaurants, in an office. I mean, it was fun and I learned a lot, but I missed talking to people and being on the floor. So, it's great. Obviously, people have a different interaction with the owner. They're excited because the owner is here and pouring their wine and bussing their tables, and it feels a little more mom-and-pop, if you will. So, I think that's another reason why people are excited about us.

Who are your VIPs? I wish everyone was a VIP. I mean, I think of them like that. But yeah, I would say neighbors, repeat guests. I haven't had any celebrities just yet. I mean, we've only been open six weeks. So yeah, I think the industry crowd — chefs, sommeliers, restaurant owners — and neighbors.

What's the strangest requests that you've accommodated? We haven't had any. I was joking with someone earlier today that the strangest request was someone asking for a glass of wine. I mean, someone asked if we could charge their phone, but that's not weird anymore. I've heard people complain about restaurants that don't do that. There's an outlet, and I have an iPod charger, so what's so weird about it? So, nothing out of the ordinary just yet.

Have people been signing up for the classes, or has that been a little slow starting out? No, it hasn't been slow at all. We started our first class on Saturday,and we have a website where you can register directly. So, we had people signing up as soon as we started putting classes up. On Saturday, there were 25 people for the Seasonal Pairings class, and that was maximum capacity. And then it was 90% full for Bubbles Before Brunch, and then Wine 101 and Blind Tastings today and tomorrow are all full too.

I like that you're doing a class about pairing with with takeout food. That's going to be a fun class. Yeah, I think that the way that I want people to experience the classes is sort of like a yoga studio — just like flowing through, taking the classes that interest you, at the times that work for your schedule. And some of these more social classes seem to be what people are more excited about. I mean, yeah, of course people want to learn about the wine regions of Italy, but it's more practical to take a wine class for "wine to go with takeout" or "wine to order on a date."

What's your favorite glass at the wine bar right now? Every night I have a little sip of Muscadet. So, we have this producer called Pepiere, and it's a Muscadet from Sèvre-et-Maine. It's a single vineyard called Clos des Briords, and I love it. It's just refreshing, briney, and I drink it all summer at my beach house, so it just sort of reminds me of being in Fire Island.

When you were putting together the list here, were you trying to appeal to a broad spectrum of wine drinkers, or is there more of an emphasis on the high end stuff? Yeah, I mean, we're not just for the industry. We never wanted to just serve esoteric grapes that no one's heard of. I really believe that...that's a great idea. I mean, you can have a wine bar where everything's different, and no one knows it. That's esoteric, and that's fun too. But what we wanted to do is have enough of those, and enough classic wines that people recognize — not necessarily huge names, but not avoiding anything that people recognize. So, a little bit of old world wines, and a little bit of new world wines; some wines that are $500 a bottle, and some wines that are $30 a bottles so that everyone can feel comfortable for whatever experience they want to have.

What's your most important tool for working the room? Well, I wear my clogs all during the day, because I can't wear my high heels all night. I know that if I put my clogs on, and take them off at 9:45 PM and put on my high heels, that's really important. Otherwise, I'm miserable.

When you're not at Corkbuzz, where do you like to eat? My happy place is Lucali for pizza and BYOB. I love going there. I love going to Anfora and dell'anima. What else...I'm like a creature of habit, so I always go to the same places.

Has Mr. Hanson checked out Corkbuzz yet? Yeah, yeah, yeah. One of the first days that we were open, I was just sitting in the kitchen eating a banana, and Steve came in and said, "Oh my god, I love this place. It looks great, I'm so proud of you." Obviously I look up to him, and he's been a great mentor to me all these years, so it was really nice for him to compliment the place.