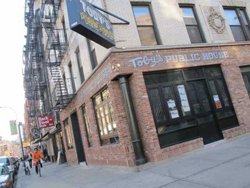 Only six establishments came before Community Board 2 last night, yet enough convoluted business plans, one-line zingers and angry residents took over room 713 of NYU’s Silver Building to let the classroom clock tick from 6:30 to 10 PM before all motions were finally completed—in CB2 fashion, only after the masses left—but Eater stuck around to get you the results:

1. Fonda Nolita, 267 Elizabeth St.: Tacombi/Fonda Nolita owner Dario Wolos asked for a full liquor license, to the chagrin of the board, five months after they recommended him for a beer and wine license. Despite community support, a petition with 5,000 signatures in fact (calling blue shoes here!), no margaritas will be found at Wolos’ taqueria. But the community board’s denial is not the only reason. Wolos proposed an austere liquor offering of four "traditional" cocktails—rum or tequila served with his house made aguaadientes or mezcal straight up—with no blender requirement in sight. In addition to feeling like he came back too soon, the board was hesitant to offer up a full license for a mere four cocktails, especially since the CB2 leader didn’t fancy himself ordering any of them. “I don’t drink tequila, or not anymore.”

2. Andalus, 59 5th Avenue: The second establishment on the docket incited a “We love New Jersey because it is New Jersey” pronouncement out of one board member as two out of the three principals live across the river far away from the proposed location (59 5th Avenue) of Mediterranean late-night tapas lounge Andalus. The restaurant and bar, according to one principal, is catered to a well-suited crowd of professionals who don’t get off work until 10PM and want to eat “fresh” food for dinner and have a cocktail, not cause a ruckus, even though their desired closing time of 4AM might suggest otherwise. Their failure to properly reach out to the community for approval led the board to request they return at a later date before any decisions are made.

3. Toby's Public House, 86 Kenmare St.: Things picked up when owner of Park Slope’s Toby's Public House came in requesting a beer and wine license for a second location on 86 Kenmare Street. Much contention over this one as the principal originally came before the board asking for a full liquor license, a 4AM close time and four TV’s for “entertainment”, all which screamed sports bar to concerned neighbors who cited an oversaturation of watering holes in their neighborhood. Despite knocking down her request to beer and wine and consenting to an earlier close time of 1AM, the owner was once again met with a flood of opposition, interestingly, a good chunk of which came from an under 30 crowd, and annoyingly, one abuser of the phrase “vis-à-vis.” The board supported the public’s stance and denied any sort of license at the location.

4. Turkiss, 104 MacDouagal St.: The evening ended with Turkiss owner asking for a beer and wine license which the board denied her unless she agree to remove the gyro-dishing takeout window. The board argued they have never awarded a license to a location with a takeout window so the owner could have one or the other. The window stays.

Also: Florio’s Restaurant requested a changeover of their existing license to a new principal and Giovanna's came in asking to add a sidewalk cafe to an already existing liquor license; both were approved.