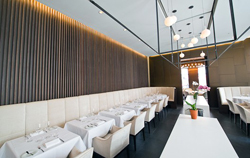 Chanterelle first opened in 1989 as one of the first fine dining restaurants in Tribeca. Despite attempts to reinvent itself and capture the admiration it so enjoyed in the 1990s, Chanterelle closed just over two years ago. NYC’s first attempt at high-concept Korean food has taken its place.

The restaurant is Jungsik, the second outpost of the popular Seoul, South Korea based Jungsik Dang. As sommelier Kyungmoon Kim explains it, both he and Chef Jung Sik Yim “want to live up to expectations of Chanterelle, which was famous for both food and wine.” They are clearly attempting just that, albeit without red wine reductions, caramelized leeks, and dusty bottles of Burgundy.

Jung Sik and Kyungmoon met at CIA and instantly became friends. While Jung Sik honed his cooking skills, Kyungmoon found himself drifting in a different direction. He took the school’s intensive wine education course and was instantly enamored. After culinary school he took an internship at Wine & Spirits Magazine, further solidifying his interest. He took a break from wine to serve his two years of mandatory service in the South Korean Army. Shortly after his release, he joined chef Jung Sik to open Jungsik Dang as the restaurant's wine director.

Though Kyungmoon, 28, has a couple of years of experience under his belt, his exposure to certain wines has been very limited.

Korean diners, he explains, are most interested in Bordeaux on the high end and the wines of South America on the lower end. Narrow demand is only one part of it, taxes are another; the duties on importing wines from many countries, like America, are so high that it simply isn’t economical.

Needless to say, NYC is a bit of change for Kyungmoon. He's not only working with a different set of clientele, he’s working with the most diverse wine market in the world. This in mind, he’s done remarkably well.

The list manages to tap into some of NYC’s zeitgeist categories—like German and Austrian Riesling and grower Champagne—and hedge on many of the city’s best importers and distributors. His pricing is standard, but with a sharp eye, there are a few deals to be unearthed.

The top end, which leans heavily on the classics from Burgundy and Bordeaux, is well chosen, but lacks the sort of depth that would make it tempting. Kyungmoon plans to begin buying at auction to build back, but for now the horn of plenty lies below $100, where you’re bound to find something in this range that will excite.

The list's great flaw, unfortunately, is its own ambition. Because it covers so much ground, it’s quick to reveal that Kyungmoon is stronger in some regions and quite a bit weaker in others. In the regions where his knowledge seems to be anemic he relies solely on bigger names rather than digging around for the sorts of wines (traditional, small production) that he tends to favor in the categories that exhibit greater strength.

Considering the circumstances, Kyungmoon has put together a fine list. But taken in the context of other NYC lists of its size, it doesn't distinguish itself in any way.

Kyungmoon is quick to admit that is learning, though. If he can preserve this lack of pretension and his enthusiasm, Jungsik's list has a good shot at being tailored into a collection worth keeping an eye on.

Bang For Your Buck
Domaine Meyer-Fonne Riesling 2006 $48
After several years working at the venerable Zind Humbecht in Alsace, Felix Meyer returned to his family’s small estate and has been putting out pure, value-driven wines ever since. Great value on Alsatian Riesling with notable time in bottle.

Domaine A&P Villaine Rully Blanc ‘Les Saint Jacques’ 2008 $63
Aubert de Villaine is co-owner and co-director of none other than one of Burgundy’s most prestigious and storied estates: Domaine de la Romanée Conti. Though hardly a necessity, Aubert and his wife Pamela have decided to make some wines for the people. This particular wine hails from a plot just below Rully’s famed 1er Cru site, Clos-St-Jacques. A versatile wine that can play nice with both light seafood and weightier fare.

Rafael Palacios ‘As Sortes’ 2006 $76
Old vines godello from Spanish winemaking royalty. Concentrated, but high in acid. Favors minerality over fruit. Here at great pricing with some time in bottle.

Bernard Diochon Moulin-a-Vent VV 2009 $58
2009 was a breakthrough vintage for Beaujolais, considered by margin and mainstream press to be a year that offers more accessibility than most. Diochon’s wines often need some tome to unwind, but in a vintage like ’09 it will drink on opening. Look for saline minerality and bright red fruit with herbs at the edges.

Domaine St. Gayan Gigondas 2001 $68
Gigondas is often overlooked as the unfashionable, out-of-style sibling to the far flashier Châteauneuf-du-Pape. Rustic and often uncompromising in youth, traditional Gigondas—like this one—generally comes into its own around the 10 year mark. Expect funk.

Cristom Pinot Noir ‘Sommers Reserve’ 2007 $67
Though the mainstream media slammed the difficult 2007 vintage in Oregon, many of the top producers put out some of the most elegant Oregon pinot in recent memory. Most have dried up on lists, so this is great opportunity to get a load of classic Willamette pinot from one of the best producers in the region.

Crowd Pleaser
Kofererhof Sylvaner 2010 $48
Koferehof is one of the finest producers in Italy’s northern Alto Adige region. Great introduction to the many charms (not least among them its pricing) of Sylvaner. Ripe, spicy, but supported by ample acidity.

Off The Beaten Path
Tzora Vineyards Neve Ilan Blanc 2010 $55
Though Israeli wines have grown in popularity over the last several years, they’re still a bit of a novelty on NYC lists. This bottling is made up of Chardonnay grapes sourced from old terraces in the Judean Hills.

Under $40
Chateau Thivin Cote de Brouilly 2006 $35 (375ml)
There isn’t much on the list under $40, so if you’re on a budget and want to drink well, head to the lengthy half bottle selection. Great deal here from another great, traditional Cru Beaujolais producer. Here with some time in a half bottle, the wine should be showing at its max potential.

Break The Bank
Daniel-Etienne Defaix Chablis 1er Cru ‘Les Lys’ 2001 $105
Great traditional Chablis from an oft-overlooked producer from the Rosenthal portfolio. This has plenty of life ahead, but drinks really well now. Great look at classic Chablis with a little bottle age, at a fair price.

Rene Rostaing Cote-Rotie ‘Classique’ 2004 $95
One of the great breakout stars of Côte-Rôtie. The wines are classic, with minimal new oak, and remain true to the traditions of the region. This should be drinking in its wheelhouse now.

WTF?
At the moment the list is full of some mistakes in organization that can be a bit distracting. Some wines are listed under the wrong regions and in one instance a city is masquerading as a region. It's also hyper categorized, which makes it more difficult to navigate.
[Krieger]