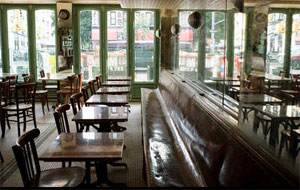 Last night's Community Board 3 meeting did not disappoint, there was no shortage of sparring dialogue, enraged restaurateurs, restaurants up for review, and new details for upcoming projects. Here is how it all went down:

1. Keybar, 500 East 11th Street: Two owners are proposing to open a new Hungarian bar and restaurant in the Angels & Kings space. They are building a kitchen on the premise, keeping the 30 foot existing bar and plan on serving Hungarian food and selection of sausages. They will close the kitchen at 11 PM and will have a DJ Thursday-Saturday and will have security on those evenings. There was a few objections from some neighbors about another bar in an area, but the owners did an admirable job at community outreach and are known to be accomplished operators. The owners agreed to the stipulations put forward by the board.

2. TBD (125-127 1st Avenue): This project, previously discussed here, was by far the most intriguing applicant of the evening, mostly due to how hush-hush they tried to keep their entire operation. Three owners were present to explain their proposed business plan, which is a seafood restaurant/seafood market/gallery all in one. The entire space is 1,200 square feet with the retail shop/seafood market in the front taking up roughly 350 square feet.

Currently, they are unable to say who will be their art gallery partner. One of the owners hails from Gloucester, Mass where he has connections to fish markets, and previously he was an owner of Bowery Beef. Michael Herman who is currently opening two other restaurants, the new Acme and a Franco-Japanese restaurant on 22nd Street, is also part of this team. The last partner involved in this project has ties to Blue Ribbon, from where they will be getting their future employees. They were approved for their full liquor license and after talking in circles for awhile agreed to the hours of 8 AM - 2AM Sunday-Wednesday and 8AM - 2AM Thursday-Saturday.

3. Calliope, 67 2nd Avenue: This restaurant, opening in the former Belcourt location, was a simple sale of assets in regard to licensing. Calliope will be a New American restaurant with a sidewalk cafe, full kitchen, seven stool bar and twenty-three tables. The restaurant is brought to you by some of the team behind Prune. The board approved them as long as they agree to keep the same operating model as their predecessor. Their hours are 5 PM - 11 PM on weekdays, 5 - 12 AM on weeknights with the sidewalk cafe closing at 10pm and a brunch service on Saturday and Sunday starting at 9 AM.

4. Bad Burger, 171 Avenue A: The discussion of this restaurant brought out unusually high emotions and many neighbors came to voice their opinions. Bad Burger is a twenty-four hour restaurant that also delivers 24/7 and provides many vegetarian and vegan options. The owner, Keith Masco, was seeking a beer and wine license and many people came forward to oppose his application, as they've done in the past. They kept reiterating the fact that the area is already overwhelmed with drinking establishments. The committee denied his application and tried to write in stipulations for the future saying he will limit the hours he serves alcohol and only play recorded background music, to which he scoffed and said would never agree to. See more about this here.

5. Goat Town, 511 East 5th Street: Goat Town: This year-old neighborhood restaurant was approved for a liquor license. Many people came forward to say what a terrific addition this is to the neighborhood, how friendly the staff and clientele are and how excellent the operators are.

6. BareBurger, 85 2nd Avenue: This eco-friendly restaurant was approved for a beer and wine license, they intend to serve organic beer and wine.

7. The Merv, 136-138 Division Street: This small Mediterranean restaurant was approved for a liquor license. The owner agreed to the stipulations, only playing background music and operating hours of 11 AM - 1 AM during the week and 10 AM - 1 AM on the weekends.

8. Hair of the Dog, 168 Orchard: Hair of the Dog, the new bar going into the old Cafe Charbon space, was successful with their sidewalk cafe application. There will be tables set up along the wall of the restaurant that will seat a total of 24 people. It was stated by many that this area is already “over saturated” with alcohol licenses, but this is a responsible business owner and would be a benefit to the community. The sidewalk cafe will be open until midnight Sunday-Thursday and until 1 AM Friday and Saturday.

10. Hachi, 185 Orchard: This full service sushi restaurant was awarded a beer and wine license, as long as they agreed to serve food until closing. The restaurant seats 70 people and will be open from 4pm-12am Monday-Wednesday and 11am-2am Thursday-Saturday.

11. Cafe Khufu, 61 East 3rd Street: Cafe Khufu received a glowing review from one of the community board members who lives next door to the establishments. They were approved for a beer and wine license.