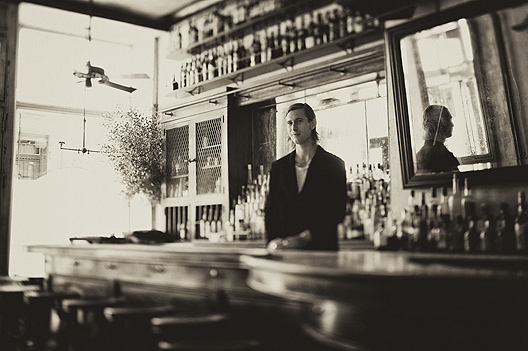 Hotel Delmano was one of the first bars in Williamsburg to offer expertly made classic cocktails in a stylish old-timey room, and it's still one of the best in that category. If you visit the bar on a busy night, head bartender Sam Anderson will probably be there. He'll make you anything you want.

What's the busiest time of the week? Sam Anderson, Head Bartender: We're very, very, very busy on Friday and Saturday nights. There will be a wait at the door then, but it's a trade-off because we don't want people to come in and be standing around, waiting for this experience to happen. We'd prefer to just let people wait outside and hang out, because they're going to have a better experience if they come in when the room is for them.

We're not a restaurant, and we're not really a bar, either — we're in between. So, we really have to be able communicate what we're doing here, and why it might take a little bit longer, but it's going to pay off. One thing that I'm proud of is that this place has a spirit of celebration, and people really come here to have a moment.

What's the most popular drink? There's two drinks that are really popular. One is called the Devil's Garden, and that is fresh lime juice, agave nectar, Cynar, house-smoked chipotle peppers, mint, and Angostura bitters. And then there's another drink called the San Francisco Handshake. That's a great name for a cocktail. Yeah, it has more than one meaning that I was aware of when I named it, which was pointed out to me. That one is lemon juice, St. Germain, Fernet Branca, and thyme-infused gin.

Tell us about your favorite customers. The people that have been coming in here for a long time, that are coming here to walk in the door and be recognized and have an immediate sense of feeling welcome. Sort of like Cheers? It's almost too much sometimes, but there is an incredibly large extended family of people that are always here, and it is like a Cheers-type atmosphere. I've never even seen that television show, but I know what you're talking about.

Do you get a lot of celebrities? I guess we get a fair share of pop culture action figures, or whatever you want to call it. But, what I would consider a celebrity is a very subjective, personal thing. Like, if Bo Jackson walked in the door, I'd be like, "Oh my god, Bo Jackson is here," and probably no one else would recognize him. Or I would totally loose it if Nick Cave walked in the door. I've worked at a lot of places, and I've literally seen everyone under the sun, and I'll tell you that Kanye West is incredibly boring, so I don't care that much. We don't make a big deal if someone we know comes in. It's in everyone's best interest to be like, "This is someone who's here to have a normal experience," and treat everyone like an equal.

Do you give buybacks at Hotel Delmano? Yeah, absolutely. There's a lot of people that are in here on a regular basis, and they become regular patrons, and that's absolutely a part of cultivating a sense of community. The point of a buyback to me is not financial, necessarily. The point of buying someone a drink is familiarity and letting them know that they're appreciated. It's a way of saying, "Hey, I really appreciate you being here tonight, and patronizing us." So for that reason, there are absolutely buybacks here.

Are there any drinks that you don't like to make? No. I feel that everyone has a right to drink whatever they want, and I have no problem making anything. That's my job, to be accommodating. But, the only thing that does bother me is when someone asks for a certain brand. It's like they're programmed. You can tell that it's like commercials and advertising seeping in, and it's less about what they want, and more about an image that they want to convey or something by ordering whatever it is. So, any time someone is ordering something they really enjoy, it's like, "Hey man, vodka Cranberry? No problem. I spent years drinking that. If that's what you like, I'm going to serve it to you and we're going to shake hands." It's not my job to pass judgement on someone's taste in music or drinking, because some people have the greatest taste in music and the worst taste in alcohol, and some people have an amazing taste in alcohol, but they put on their iPod and Creed is playing.

Do you have a favorite drink to make? I really enjoy making a great Martini. I take a lot of pride in my training, and making the classics right is really important.

How do you cut off a guest? It's unfortunate when it happens, but you've got to think about their safety, first and foremost. You have to make sure that they take care of themselves, and you have to help them recognize that. I'm always very gentle about it. I say, "Hey, I'll gladly serve you tomorrow night, but just not tonight, anymore. Come back tomorrow and I'll buy you a drink, but I think this is the moment where you should start thinking about getting home." I've seen those situations handled in a million different ways, and I think it's always best to be gentle and firm. You don't know what someone's got going on, you don't know why they're in this state, and you don't want to pass judgement, but it's important to be helpful.

How did you get into bartending? I moved to New York and I had no intention of being a bartender. I worked in bookstores and coffee shops, but I ended up getting a fluke barbacking job at Freemans. A friend of mine just passed the job on to me because he was going on tour. I had no idea what I was walking into, but I ended up working with some of the all-star bartenders in New York and they took an interest in me, for whatever reason. So, I was trained by some of the best people in the business, and I started bartending there. It was like zero to 60, just like that.

What's your most important tool? I think at this point I could make a decent cocktail with a spatula. Not to objectify the barback, but I think a barback is my most important tool — someone who is anticipating what we need. It's a very underestimated job. I have had the privilege of having a barback here the past couple of months who is maybe a better barback than I am a bartender. He's just so on point.

When you're not at Hotel Delmano, where do you like to get a drink? My favorite bar is on the Staten Island Ferry. It's usually on the second level. There's like a snack bar, and you can get a Coors Light, take it to the back of the ferry, and watch the city go by. That's my favorite.

What are you drinking on your days off? I can't tell you the last time I had a cocktail. Right now I've been drinking this German Riesling, and I'm also like probably going to be drinking beer, like a Mexican beer of some sort.

If it's your first time at Hotel Delmano, what should you order? For the first experience, I would order a seafood tower, which comes with a very large array of shellfish, and we have a great ceviche. We also have a really great selection of cheese and charcuterie, but the raw bar is something that we've been working on for a really long time, and it's only gotten better over the last three years. I would probably check out our wine list, and in the cocktail area our Michelada is really amazing too. It has fresh lime juice and I make a grenadine compound with tamarind, pomegranate, grenadine, and smoked tobacco sauce. It comes with Negra Modelo and a lime wedge dipped in hickory-smoked salt.