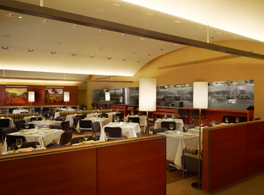 What makes a great wine list? There are a myriad of criteria, like: compatibility with the food menu, fair pricing, vintage depth, and so on. Most are more or less quantifiable. But there’s another, purely qualitative, criterion: that thing that makes you curious and inspires you to take chances on wines you might know little about, maybe even max out a credit card and take your shirt off.

For those who have a hard time envisioning a wine list that might inspire bankruptcy and/or nudity, think of its equivalent as a food menu that makes you want to indulge with abandon and excitement, physical dimensions of your stomach be damned. Food and wine menus with this x-factor require of the chef or sommelier a load of passion, talent, and a grip of energy.

Here the main draw is the attention paid to the south of France (i.e. Languedoc, Roussillon, and Provence). Of the three, Madrigale gives notable space to the Languedoc, not only because of its straight value, but also because he believes the terroir in Languedoc is "more intriguing than, say, the southern Rhone's." Even so, he admits, quality in this part of France is still uneven. In order to ensure that the list reflected the best of what this often misunderstood region can produce, Madrigale slogged through most of what the market had to offer. What he ended up with is a welcomed homage to wines that generally act as wine list wallflowers.

Though this focus certainly inspires the most curiosity, Madrigale also has a soft spot for the wines of Greece and dedicates real estate to showcasing a country that is on its way out of obscurity. Here you’ll find more well known (relatively, of course) varieties like moschofilero and assyrtiko, along with wines that are practically endangered in the U.S., like mavrotragano from Santorini and limnio from Macedonia—not to mention a vertical of xinomavro from Kir Yianni.

Though most of Madrigale’s time is spent hawking coastal wines that logically pair with the cuisine, when the list ventures inland it does so confidently, offering a good mix of trophy wines and off-vintage gems from Burgundy, Tuscany, the Rhône, and beyond.

Do not, however, expect to crash into a monumental tangle of Châteauneuf-du-Pape. It’s a region that might fit the theme here, but it’s one that Madrigale doesn't feel the need to "sandbag" the list with, no matter how many fat-pocketed folk are looking slay some Clos des Papes. Instead, he’d rather throw his chips in on pushing people toward the lesser known regions of Europe.

In other words, this list may have a solid mantle of trophy wines, but isn’t about bait. It’s truly a labor of love with equal devotion to both the storied and the unheralded wines of Europe. Be advised that pricing is on the high side in many places, but it's not so wild that it requires great caution. It's a tick above standard for the neighborhood, on a list that's anything but.

Bang For The Buck
CHATEAU DES ESTANILLES, Faugères Blanc, Languedoc 2006 $59
Château Estanilles, which is under the direction of father and daughter team, Sophie and Michel Luison, is the top of the Faugères food chain. Their Faugères Blanc is a fine example of how fresh and lively these southern whites can be in spite of their climate. Here with a little bottle age, a blend of Marsanne, Roussanne, and Viognier.

JULIEN LABET, Cotes du Jura 'Fleur de Savagnin' Jura 2008 $70
Labet remains a tad under-the-radar, but this young winemaker is making some of the finest wines out of the Jura. Most of the vines on his property are between 40-80 years old and are grown in a variety of different soils. His keen sense of terroir guides each wine to express its particularly place. Grown in pure limestone, the Fleur de Savagnin is all Chablis-like acidity and minerality with the stuffing to match it.

COS, Pithos Bianco, Sicilia IGT, Sicily 2009 $75
Giusto Occhipinti, winemaker at COS, is one of the most influential fogures in Sicily’s slow, pocketed move toward making wines that are true to heritage and place. He is staunch in his dedication to indigenous varieties and ancient winemaking methods, using anfora pots to age several wines, including this guy. 100% grecanico aged in anfora for a little over 6 months. There’s some extended skin contact here that gives the wine nice structure which couples with southern roundness, intact acidity and a savory, mineral through-line.

DOMAINE D’AUPILHAC, Montpeyroux, Languedoc 2008 $50
Though the climate in Languedoc is undeniably warm, many of the finest vineyards in the area lie at altitudes that enjoy a cooling Mediterranean influence. Here in Montpeyroux, however, there is less Med influence and more heat, which makes a wine like this—with freshness and rhythm—so curious. Aupilhac is truly one of the great value-driven domaines in the Languedoc and testament to the unmatchable quality-to-price ratio of the region’s best wines. 30% Mourvèdre, 30% Carignan, 25% Syrah, 10% Grenache, 5% Cinsault and all about meaty, dark ruit, spice and mineral.

DOMAINE LOUIS MAGNIN, Arbin Mondeuse Savoie 2009 $60
The Savoie region is better known for its great skiing and white wines, but this bottle, made from the native Mondeuse grape, is proof that this Alpine region is a far more diverse bargain bin. Magnin is one of the finest producers in Savoie and works particularly well with the cru of Arbin, which is considered one of the best terroirs for the grape. Aromatic, peppery, with alpine-level acidity.

DOMAINE LE GALANTIN, Bandol 'Longue Garde' 2000 $85
Domaine Le Galantin is a relatively small estate, now under the direction of a young woman winemaker who has since took over from her father. The Longue Garde is their top bottling made only in top vintages and is sourced from the oldest vines on the property. This is gorgeous mourvèdre that’s showing its age well. All sorts of saddle, earth, and dark fruit. Lot’s of wine for the price.

SALOMON UNDHOF, Riesling 'Pfaffenberg' Krems 1996 $120
Though this isn’t exactly in everyone’s price point it’s a stellar deal on 15 year-old riesling from one of the great sleeper producers. If you’re willing to spend over $100, this is top dry Austrian riesling for a very fair price.

Crowd Pleaser
DOMAINE SKOURAS, Mantania Moschofilero, Peloponnese 2010 $49
After studying oenology in Dijon (one of the first Greek winemakers to do so) George Skouras returned to Greece to establish what would become one of Greece’s first modern artisan wineries. His estate remains one of the country’s finest to this day. Like pinot grigio, the moschofilero grape is a pink-skinned variety that is all about high acid and drinkability. However, it’s not simply a wine for the PG floozies, it has the minerality and aromatic intrigue to satisfy the more discerning.

TURLEY VINEYARDS, Cinsault 'El Porron' Lodi, CA 2010 $50
Turley is one of the elite producers of California Zin, but this gem—an old-vines bottling of cinsault from the very warm and oft-dismissed Lodi AVA—has made waves in the NYC market. Despite the heat, alcohol is kept in check and the fruit is bright, juicy and spicy.

Off The Beaten Path
ARGYROS ESTATE, Mavrotragano, Santorini 2008 $95
Santorini is known for its white wines produced from the Assyrtiko grape, but the island also produces a small amount of red wine primarily from the mavrotragno grape. Most of these wines do not make it to the U.S. and very little DNA information is known about the grape, which grows only on Santorini. Floral, peppery and herbal with formidable tannins and ample acidity.

Under $40
GAIA, '14-18hr' Agiorgitiko Rose, Peloponesse, Greece 2010 $35
Yiannis Paraskevopoulos Agiorgitiko Rose is far more serious than the price point might suggest. The fruit is sourced from a high-altitude limestone plot in Nemea and the 14-18h refers to the number of hours that the juice stays in contact with the skins. The result is all rocks, ash, and juicy red fruit.

ROBERT SEROL, Cotes Roannaises ‘Cuvee Troisgros’ Loire Valley’ 2009 $39.
The Côte Roannaise is a tiny appellation in the hills northwest of Lyon. Gamay Saint Romain is the main variety here and the wines tend to mimic Beaujolais, holding strong on the lean side. Robert Serol is a small, family-owned estate in the heart of this somewhat obscure, but historically important appellation. Their Cuvee Troisgros is a selection of old-vines that's lightly rustic, juicy, and lovable.

Break The Bank
LARMANDIER BERNIER, Terre de Vertus NV $145
Larmandier is one of the great terrior-driven producers in Champagne’s Cotes de Blancs. Cellar techniques are minimalist and dosage is minimal if bypassed, as it is in this bottling. This 100% Chardonnay is beautiful, pure, and precise Blanc de Blancs.

WEINGUT JOH. JOS PRUM, Riesling Kabinett 'Welhener Sonnenhur’' 2001 $135
One of the biggest names in the Mosel, Joh. Jos or simply “J-J” makes a variety of wines from the estate’s distinguished holdings. The jewel of the J.J. crown is undoubtedly Wehlener Sonnenuhr. It’s rare to find a kabinett floating around with 10 years on it. This should just be showing some age, and is a great opportunity to get to know JJ.

DOMAINE PATRICK JASMIN, Cote-Rotie 2000 $199
One of the best producers in Cote Rotie, Patrick Jasmin is a guy dedicated to tradition. The straight Cote-Rotie from 2000 is drinking very well now with the sort of plush fruit indicative of the vintage, but with plenty of grace and aromatic intensity.

WTF?
NINO FRANCO 'Rustico' Prosecco Di Valdobbiadene NV $69
There's too much here that pushes the envelope and is a product of great care and discovery that this prosecco feels out of place, especially at its $69 asking price. Why even have it if Montbourgeau Cremant du Jura is listed at the same price and Domaine Taille Aux Loups, Montlouis Triple Zero, is sitting at $10 less? Sore thumb.