Share All sharing options for: This Month in New York City Dining, 1991

Occasionally, we like to look back on other periods of New York dining. Here now is a rundown of what was abuzz in the city 20 years ago: September of 1991. 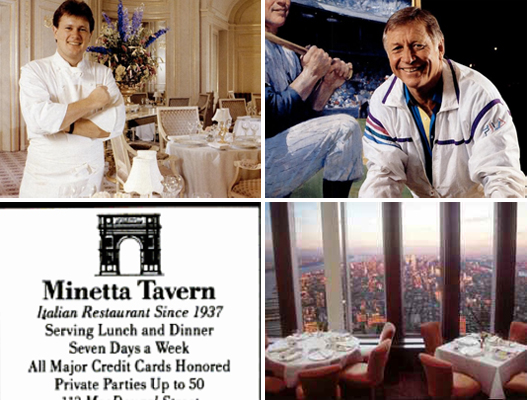 Dining News: Lespinasse, Planet Hollywood, Tommy Tang's
The most highly anticipated opening of September 1991 was Lespinasse. The new restaurant in the St. Regis Hotel had crystal chandeliers, white tablecloths topped with Tiffany flatware, cream colored walls, and most importantly, a menu of Asian-accented French food from 36-year-old chef Gray Kunz. One week after opening, Bryan Miller remarked that it was "the most ambitious and elegant spot to open this season," and "definitely a restaurant to keep an eye on."

The Times also reported that Aurora in Midtown was going to be reborn as Dolce, an "East Coast tribute to Wolfgang Puck." In other dining news, a group of Upper East Siders were miffed when Eli Zabar converted a Madison Avenue apartment into a bakery for his E.A.T. restaurant, without the proper permits. Outrageously expensive hot spot Bellini by Cipriani introduced a more affordable menu, because their landlord apparently lowered the rent. New York's fall restaurant preview announced the imminent arrival of Planet Hollywood, an "homage to movieland" that would feature "seating for 375 fans, who will be able to watch trailers for upcoming movies as well as original videos on a dozen movie screens." And those seeking an up-close view of famous people were encouraged to head to Tommy Tang's Thai restaurant in the Village, which launched a poetry night that attracted celebrities like Justine Bateman and Ally Sheedy.

This month in 1991, Bryan Miller awarded two stars to Cellar in the Sky, the wine-centric counterpart to Windows on the World at the top of the World Trade Center. He found some weak spots on the menu, but loved the dining room:

It's not easy to create the illusion of a cellar on the 107th floor. The restaurant has done so with soft lights, glass walls lined with wine racks and arches overhead. An outstanding guitarist, John Lehmann-Haupt, entertains nightly, and if you're lucky, the sommelier may pop out of his cave and burst into operatic song.

Miller also doled out one star to Contrapunto, a pasta place across from Bloomingdales (now Brasserie 360); two stars to Arcadia, an American cafe owned by Ken Aretsky that would become the future home of Cat Cora and Missy Robbins; one star to Canton in Chinatown; two stars to Spanish restaurant Eldorado Petit, which had a young Jose Andres in the kitchen; and another two stars to Nippon on 52nd Street, which is still going strong today. Gael Greene went clubbing at Le Bar Bat, and the Underground Gourmet loved Cafe Lucas, the casual, chic European restaurant from Moroccan stud Sam Attius.

A profile of baseball legend Mickey Mantle explored his new life as the co-owner of a sports bar and grill on 59th Street. Mantle noted: "If I'm not in New York for even two weeks, I start to miss the hell out of it. The restaurant's practically my home." The Times interviewed a group of chefs about their most prized possessions, including Jean-Georges Vongerichten, who had just left the kitchen at the four star Restaurant Lafayette to open his first solo project, JoJo. His juicer made the trip with him:

When he left Lafayette, the juicer that had been running three and a half hours six days a week for four years was gently transported to Jo-Jo in its original packing...These days, the juicer is nowhere in sight. The kitchen at Jo-Jo is too small. So every morning it is lugged up from the basement and run nonstop for three hours. Then it is taken downstairs again, a decidedly more private object of Vongerichten's affection than it was before. 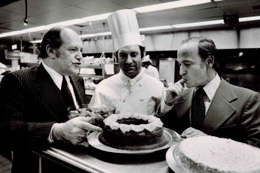 And the restaurant world lost one of its titans this month in 1991: Alan Lewis, a partner in the Restaurant Associates dining group. With Joe Baum, Lewis opened a string of legendary establishments including The Four Seasons, The Forum of the Twelve Caesars, and Windows on the World. He died at 70 in the office of The Rainbow Room, where he was managing director. [Alan Lewis (far left) with Joe Baum (right) and Windows on the World chef Andre Renee (center). Photo: Edible Manhattan].