A Tchotchke Tour of The John Dory From Ken Friedman

Share All sharing options for: A Tchotchke Tour of The John Dory From Ken Friedman 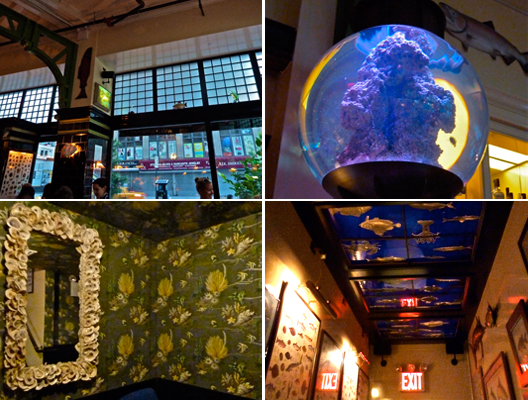 Ken Friedman loves hitting up flea markets for things to put in his restaurants. When he opened the original John Dory on 10th Avenue three years ago, he scoured the East Coast for different nautical tchotchkes to fill the space. Most of these were carried over and installed in the second iteration of the restaurant in the Ace Hotel, and he still adds to the collection whenever he finds something that catches his eye. Here's a tour of The John Dory Oyster Bar from Ken: 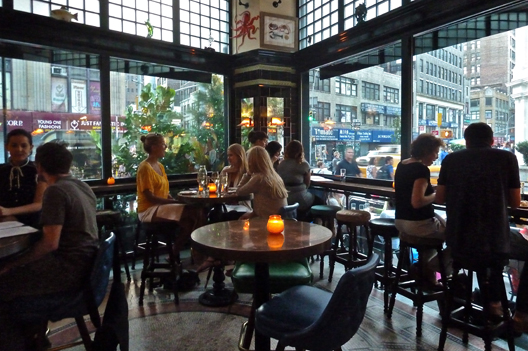 Ken Friedman, Owner: "Because the original John Dory didn't work, even though we loved the concept, we wanted to set this one apart from the first place. We're very good at bars, and we're not so good at restaurants. The Spotted Pig is a phenomenon, and The Breslin is basically The Spotted Pig junior — it works really well, but it's as much a bar as it is a restaurant. With this, we wanted to make it what we do best: a bar with great food. This one is The John Dory Oyster Bar, so every seat is a bar stool and there's no chairs — they're comfortable, there's backs on them, but they're all bar stools. 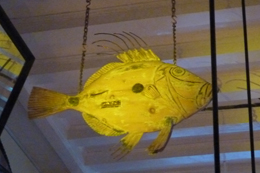 "Back in the old days, pubs always had animal names and names like 'Queen Victoria' and 'King Arthur,' because people couldn't read back then. So they would hang like a wooden pig, or a wooden duck, or a wooden image of the King, and they'd call it 'The King George.' So, when the John Dory was on 10th Avenue, we had this wooden John Dory fish that was made in England hanging right in front of it, just like there's a wooden pig hanging in front of the Spotted Pig. It was on 10th Avenue, in between what is now Colicchio & Sons and Del Posto. 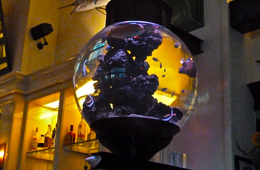 "On either side of the front door of those place, there are these big sconces, these huge lights. I was thinking about having round sconces, and then I thought, 'Well, sconces are just air and light, so why don't we just have them be water and light?' So, we made those to be the sconces outside the front door of the first John Dory, and we never put them up. They stayed in storage for a year and a half, and we decided to put them up here and fill them with Pacific Ocean fish on one side, and Atlantic Ocean fish on the other. 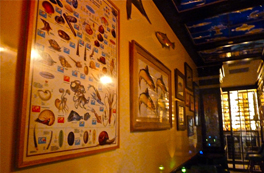 "There's a place in San Francisco called the Swan Oyster Depot, and they have these posters up, and so I just kind of found them online. I got another one in New Orleans, another in the Hamptons, and I happened to find the one with the bass on it from the Hudson River Park Trust. That one's all Hudson River fish. 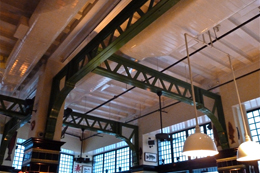 "We built these trusses as an homage to the Grand Central Oyster Bar. The roof looked like a train station anyway, and we wanted to make it even more like a train station. They were supposed to be black, but in the eleventh hour I saw a postcard from the Paris Metro, and the steel in the girders there is green, so I decided to paint them green, for no apparent reason. We worked with Roman and Williams on this and The Breslin. They're really cool to work with because they're basically like movie set designers. 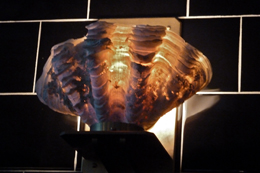 "We wanted the space to look a little like a fishmonger's place in England, the kind with the tile walls that you hose down at the end of the night. So, they were going to be dark blue, and [Chef] April [Bloomfield] actually said, 'Why don't we just make them black?' It's one of the only times she's ever chimed in on design and she was totally right, as she usually is. I wanted to have all the lights on the walls be shells, so I just asked Roman and Williams if they knew anyone that could do that, and they found someone that could take all these shells we found and make them into lights. 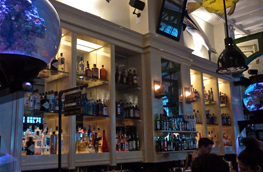 "I mainly just wanted the bar to be lots of bottles on display. It's cool to sit at a bar and be able to see what's going on behind you, so it's good to have mirrors wherever possible. I had these lights from years ago, they're actually from Bloomfield, which is a big flea market in Massachusetts, and some of them are from the Rose Bowl in Pasadena." 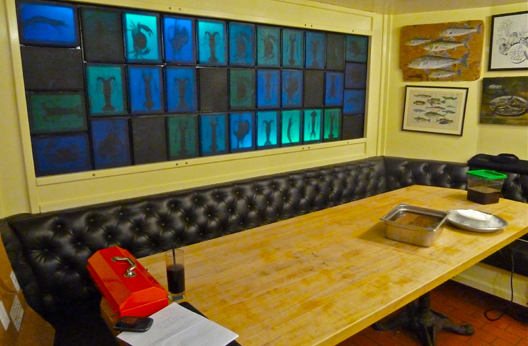 And, Ken gave Eater a peek at the new chef's table that they recently installed in the kitchen. The John Dory Oyster Bar's sous chef Christina Leki explains: "We've been doing one dinner a week with a special menu, and then also if it's crowded upstairs and we have a large party, we've been doing off-the-menu meals, with people coming down. Seven tops usually will have to wait for an hour, but we'll show them the table, and they'll come down and have just off-the-menu stuff. It's super easy."

Previously:
· A Design Tour of Blaue Gans With Chef Kurt Gutenbrunner [~ENY~]
· A Tour of The New Meatball Shop with Michael Chernow [~ENY~]
· Rob Shamlian on the Indiana Jones Vibe of Los Feliz [~ENY~]
· Donal Brophy on the History Behind Mary Queen of Scots [~ENY~]