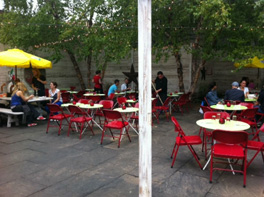 A group of us went by the new La Esquina in Williamsburg a little before 6 PM on Saturday evening. The courtyard had about 15 people eating at various tables, but the majority of the tables were empty. We asked for a table for six (plus two strollers) and the hostess said that it would be a 15 minute wait, a puzzling response considering the place was empty (see photo). A few minutes later we asked the hostess if we could be seated at the still very empty tables, and she said that there was already a group of six and a group of five that were ahead of us and that the servers and kitchen couldn't handle all of these parties at once, and that there were a ton of reservations even though her clipboard showed three names.

She then pointed to a picnic table in the corner with three people eating tacos and drinking beer and said that she had told them they had to leave in 15 minutes so we could sit. Still confused, I went back to wait. As we still waited, a family of three asked for a table and the hostess also told them 15 minutes. It began to seem like they had trained her like a seal to just respond that there was a 15 minute wait no matter the size of the party and no matter how empty the place is.

After hearing that response, I decided to ask her what would happen if the people eating at our table did not finish their meal in the 15 minute time period she made available to them. She replied "I'll figure something out and come up with another solution". So I asked why she could figure out another solution then but couldn't just come up with that idea right now? The only idea she needed to have was to just push two other tables together and let us sit down, bring over some water and menus and let us order some tacos. But it wasn't going to happen.

She asked if she should bring over a manager to talk to me, but by that point I was over it. Who knew that it could be so difficult to give a new restaurant a significant amount of money before 6:00. Another hostess type person came by and flippantly sought to accommodate us by saying "we'll just do whatever you want", but we left and headed to Diner, a restaurant that is probably 1/4 the size but where they quickly sat us and had a $300 check before 7:45.
· La Esquina Coverage [~ENY~]
· Complaints Dept. [~ENY~]