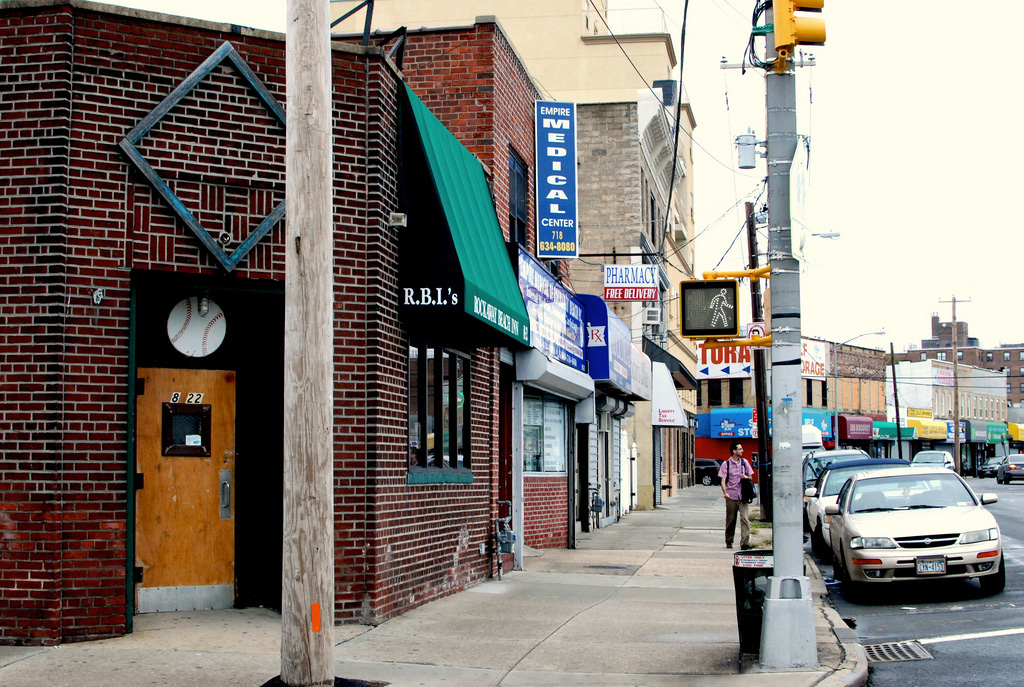 I had a grudge against the Rockaway Beach Inn going in. The seedy denizens of this sketchy dive chased my photographer away when she tried to get some shots off. And she doesn't scare easy. I was not as abused by the rummies. But then I'm six feet tall and male. And I entered through the side door, not the main entrance, which gives out onto one of the most forlorn intersections in outer-borough slumdom.

The Rockaway Beach Inn—a rather grand title for this saloon—has a capacious interior. The black-and-white checked floor stretches on forever, past the long, hulking wooden bar, past a beaten-up dart board and a platform lined with a drink-resting ledge, and finally sloping down to a room pool table area. The giveaway that this address has long been a bar are the massive, twin, wooden doors to the ice box—one behind the bar, one around the corner near the bathroom.

The people who drink here tend to have matted hair, like they've just returned from the sea. Most don't look like they're in a hurry to go anywhere, but a few seem to have jobs. One had an impressive array of keys hanging from his belt. Another wore a sweatshirt from a local bait company. The most active barfly kept bouncing back from his stool to the jukebox, plugging in once, sunny hit from 1970 after another. Jackson Five, The Osmonds, The Partridge Family. The bartender knew all the words to "The Love You Save." "I Want You Back" got the bag lady in the pink sweatpants bouncing in her seat.

She was sitting in one of the ponderous round booths made of rough wooden slats that line the western wall. The middle one had a round table, on which was carved the life-size image of a baseball player I couldn't identify. Prying eyes from outside were held at bay by windows armed with both lace demi-curtains and rattan blinds.

The odd ducks at the bar were two young, short bicyclists, who were obviously on a tour of Brooklyn and had stopped in for a fortifying shot and a beer. (Later, I saw them at Rockaway Taco.) At one point, an old guy wandered in from the street with a shopping bag in one hand and a bicycle pump in the other. "Bicycle pump," he said. "Bicycle pump for sale! Anyone want a bicycle pump?" I looked up at the bikers. They paid no attention to the man. Not their pump, I guess.
—Robert Simonson