Sam Buffa on the Design of Vinegar Hill House

Share All sharing options for: Sam Buffa on the Design of Vinegar Hill House 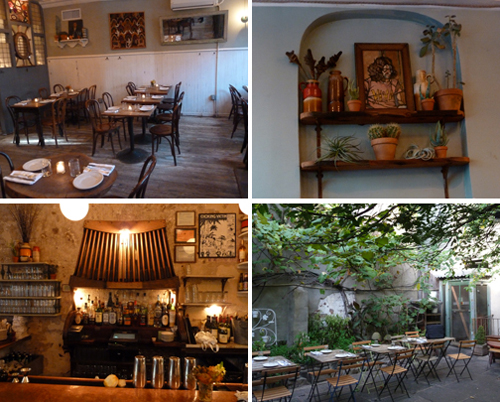 Vinegar Hill House is less than three years old, but the restaurant looks much older than that. Owner Sam Buffa designed the space using a number of vintage materials and found objects, and he put it all together in such a way that the dining room has a unique, lived-in feel. Here's a tour from Sam:

Sam Buffa, proprietor: "Vinegar Hill is kind of a forgotten neighborhood, in a lot of ways. It's a small area, only four blocks by four blocks, and the industry left after the Navy Yard closed down in the early '60s. Since then, there hasn't been too much action here because it literally just kind of dried up. My partner and I, we would always come here and look at the neighborhood, and we were kind of mesmerized by it. It feels like some kind of small town that artists lived in, maybe up on the Hudson somewhere, not in Brooklyn. There's this sort of upstate vibe to it, but then it's surrounded by heavy industry and that kind of stuff. So for me, I was inspired by the kind of handmade house aesthetic of the Woodstock era, where you find this kind of forgotten space and you slowly find stuff from a friend or another artist or whatever, and you make it your own, and make it this cozy little environment. 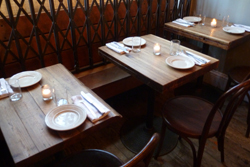 "A lot of the tables are made of a butcher block that was taken from one of the apartments upstairs. Some of them are made from first growth mahogany that I got from a place called All Good Things. I forget what hurricane, but there was one about eight years ago where the trees fell down. You can't cut any of the first growth, but if it falls down, you're able to use it. 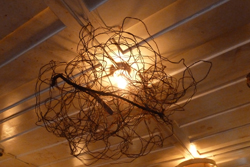 "I found this sort of urban tumbleweed on the beach. I go surfing out in Gilgo beach, and it was just blowing around. It's pretty cool, and I didn't change it. A couple of pieces of driftwood were in it, and I just tacked it up there. This is old fencing that came together and fell into the ocean. 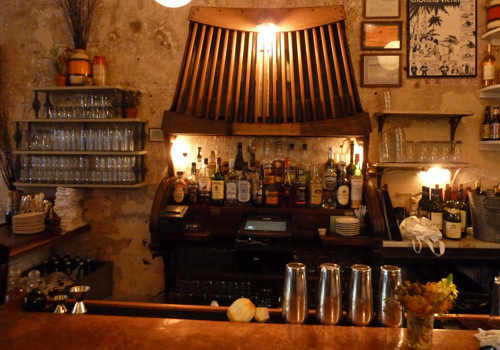 "So, the bar top is all copper, I had a friend make it. And the back bar is an old organ that I repurposed. Basically, I came across this trying to think about different ideas for a back bar. I was searching on the internet, and I somehow came across this picture of a pipe organ. I found this guy in Allentown, Pennsylvania. He restores organs, and he builds them new. There's basically only like three guys in the United States that work with these kind of organs, and he's one of them. I called the guy and I asked, 'Do you have any old parts?' And he said, 'Yeah, actually, I just pulled this one out of a church that just burnt down, and I don't have much use for it because half of it is ruined.' So, I drove out there with a friend, and I loaded it up, and I actually got all of these old organ pipes, which are made out of zinc, and I've used the metal for patches in the floor. I did the work on the bar myself, just working from different parts. It was literally like 20 feet wide by 40 feet tall, but I just got small tiny pieces of it. 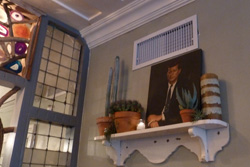 "This is kind of my answer to?.you know how when you go into every boring restaurant now, there's always a picture of a dead old guy? This is my dead old guy. 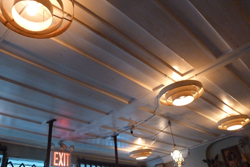 "I actually got all of these out of the Brimfield flea market. They're actually old lights, they used to be hanging off of shafts. You know, the classic '60s office lights. So, these were just the last pieces that were left of it, and it was kind of nice that they were rusty and not super-modern. 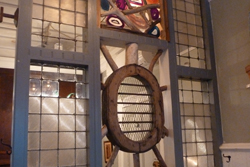 "We built this wall. A lot of this is driftwood that I found on the beach, and it also incorporates some other found objects. 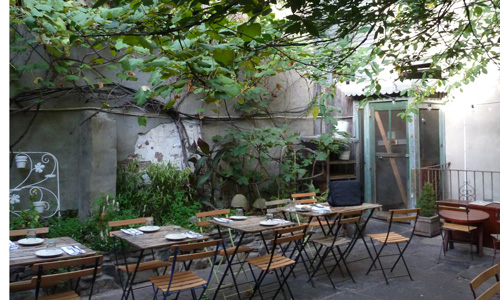 "We didn't open with the backyard space, but then come spring we reworked the backyard. There was all this great blue stone here, but it wasn't set up for seating. Whoever had it before, they did a lot of gardening, which was great, but it meant that there were a lot planters. So, we widened it and we were able to use a lot of the stonework and bricks and things that were just laying around. We're lucky that we have this great old grapevine. Unfortunately, it fell down in the hurricane, but we're going to prop it back up. It fills up pretty well, and we tend to eat a lot of the grapes off of the low-lying areas. It's massive, it goes way over. It was supposedly planted in the '20s. There was an Italian family that lived here. "