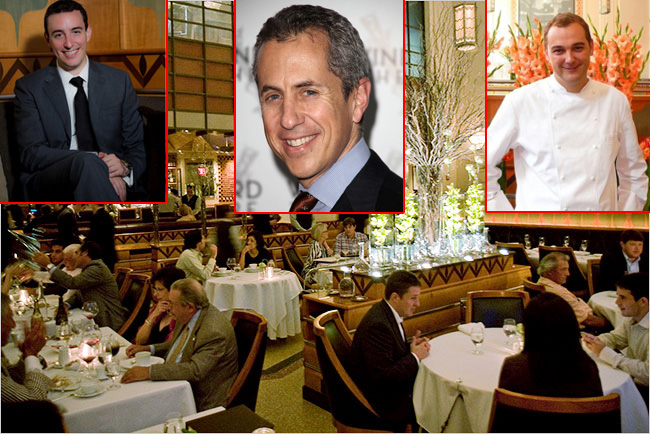 Perhaps the question shouldn't be is Danny Meyer selling the crown jewel in his empire, the four starred Eleven Madison Park, but when? All summer various Eater sources have been buzzing about a transfer of ownership from Meyer to the restaurant's chef, Daniel Humm, its general manager, Will Guidara, and whatever team of backers they've assembled, and now new sources hear that the deal is already done and they're planning to officially go public with the news later this fall.

Close watchers of the Eleven Madison Park first perked their ears up when news broke that Humm and Guidara joined the developers of the forthcoming NoMad Hotel to run all food and beverage there. It was strange for Union Square Hospitality Group employees, and major players at that, to take on such a large new project without any involvement from Meyer. Stranger still was when Eleven Madison Park took on new PR representation, the first ever to strike out from under the USHG in-house umbrella. And then there's the shared staffing: EMP chef de cuisine Abram Bissell was recently named chef de cuisine over at NoMad, and future NoMad GM Jeffrey Tascarella is currently training over at EMP. A lot of intermingling for two separate entities.

But why would Danny sell? It's not completely clear, but relatively speaking Eleven Madison Park is not the huge moneymaker for Meyer, who is now concentrated on expanding his cash cow chain Shake Shack across the universe. Four star restaurants have low margins, he has finally unloaded the Tabla space, and he may be ready to walk away from Eleven Madison Avenue altogether.

And how could the new team get enough cash to persuade Meyer to give up his first and only four star restaurant? The NoMad developers have deep pockets, for one. So do the Eleven Madison Park regulars, many of whom would be thrilled to own a piece of the place.

Of course this is technically conjecture. Neither Meyer's nor Humm/Guidara's camps will offer an official comment. Still, we expect developments before the NoMad opens in February.

Update: Just another tidbit. A new industry source confirms the above, and notes that the ownership of the NoMad had to agree on the EMP deal back in May before announcing the Humm/Guidara acquisition. So this is NoMad money.
· Daniel Humm, Will Guidara Officially Sign on at Nomad Hotel [~ENY~]
· All Eleven Madison Park Coverage [~ENY~]