Mario Batali on the Past, Present, and Future of Eataly

Share All sharing options for: Mario Batali on the Past, Present, and Future of Eataly 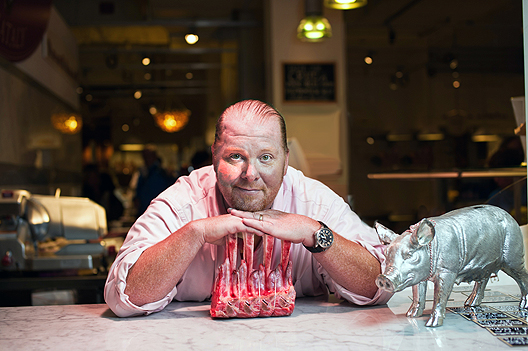 Pitched as an Italian marketplace offering the best imported and local goods, with a slew of specialty restaurants from Mario Batali and Joe Bastianich, Eataly was the most anticipated opening of 2010. After months of hype, the doors finally opened on August 31. There were some kinks to work out, but Eataly quickly became a favorite of local diners and shoppers, and a destination for food enthusiasts visiting the city. We recently chatted with Mario Batali about the first year of his market and restaurant complex, and the road ahead.

When did you first talk about bringing Eataly to NYC? Mario Batali, Proprietor: This started in 2008, when [Eataly Founder] Oscar [Farinetti] first met Joe [Bastianich]. I fell in love with it the first time I set foot in the store. We looked all over the city and decided that a middle-of-town location trumped less expensive, peripheral spots.

How was the opening? It was not without error, but I feel it went very, very well. And like all new good things in NYC, it settled into a happy, busy, and consistent state of commerce. We were not completely ready for retail expectations, but we have worked out most of the kinks and will continue to modify our game and our store to exceed customer expectations. Right now, we’re building a new Scuola in order to accommodate the demand for more hands-on classes.

What was your take on the review process? Did you wish that critics like Sam Sifton had given more formal reviews to some of the restaurants? The entire operation is casual except for Manzo, which I believe merits a serious review.

After one year, what are you focusing on right now at Eataly? We want to make the line between retail and restaurant more contiguous. The store is much more about cooking at home than a lot of guests perceive it to be. I would like Eataly to be more and more about product information and exchange. We are constantly editing and changing the way we source, make, display, and serve food.

Joe has talked about expansion to LA and DC. Would you ever consider other cities? Yes, and I like Toronto and Mexico City too. What about another location in NYC? I think one Eataly is enough for NYC.

How is Birreria, three months into operation? Can we expect any sort of menu changes this fall or winter? Of course you can. It operates with the same thought process as the independent restaurants. Alex Pilas is the Executive Chef of the store and has a crazy, fertile, and thoughtful mind.

What are your favorite things to eat at Eataly right now? Calves tongue at Manzo, Portobello with peaches at Le Verdure, Pizza IGT at Pizza, Biroldo and IPA at Birreria, Dave’s crudo at Pesce, and Prosciutto San Daniele in the Piazza with a cold glass of Bastianich Malvasia.

One year in, how do you feel about the public's overall response to Eataly? It has exceeded even my delusionally optimistic hopes.

Is there anything else we should know about Eataly these days? It changes every day, and the new Scuola will function as a pop-up restaurant when it is not booked for classes and will change with the whim of the chefs.