The History of the 98 Year-Old Grand Central Oyster Bar

Share All sharing options for: The History of the 98 Year-Old Grand Central Oyster Bar

Every once in a while we like to take a look at the rich history of a restaurant that has survived for generations, outliving trends, critics, wars, Prohibition even. Today, Grand Central Oyster Bar. 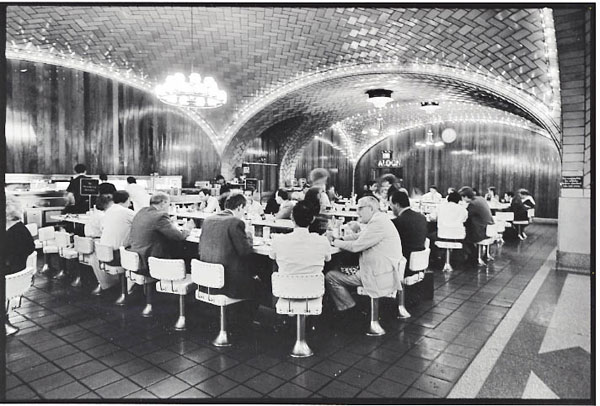 At 12:01 AM on February 2, 1913, the largest train station in the world and an architectural wonder, Grand Central Terminal, opened to the public amid much fanfare. Three weeks later so too did the 440-seat Grand Central Oyster Bar. Back then, and for decades prior, oyster bars, stands, shacks, and cellars were an obsession in New York, and the opening of the terminal came right at the heyday of long distance train travel, so it was a smart combo. The dining room supplied meals to the long distance trains leaving the station and offered commuters and locals a place to slurp oysters and pan roasts at lunch and before heading home. 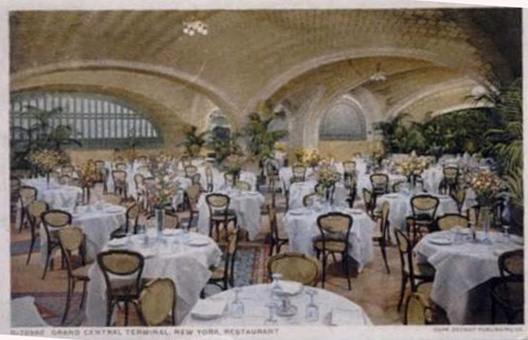 The Oyster Bar space, designed by prolific New York architect Raphael Gustavino was then as it is now, grand and magnificent, accented with arched and vaunted ceilings covered in terracotta tiles. After a competing restaurateur passed on the space in 1912 (deeming it unappealing), concessionaire Union News snatched up the Oyster Bar location and hired Viktor Yesensky, known at the time for running the famed oyster bar at the Hotel Knickerbocker, to run the kitchen. 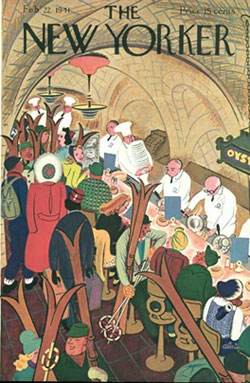 Because of the look of the space, the glamorous nature of the terminal, and Yesensky's work at the stoves and the bar (he stayed on for 33 years), Grand Central Oyster Bar quickly became one of the most crowded lunch counters in New York, serving all manner of raw clams and oysters and immediately famous oyster pan roasts and oyster stews.

As the decades wore on, the Oyster Bar remained a haunt for well-heeled travelers and Midtown workers alike, but eventually the space and terminal fell into decline and ceased to be seen as destinations. By the 1950's long haul trains grew out of fashion, and plans eventually arose to demolish the terminal and turn it into a high rise office building. Over the next two decades those running the terminal threatened to demolish it and were only stopped when activists—led by former first lady Jackie Kennedy—succeeded in getting the station declared a national historical landmark in 1975. 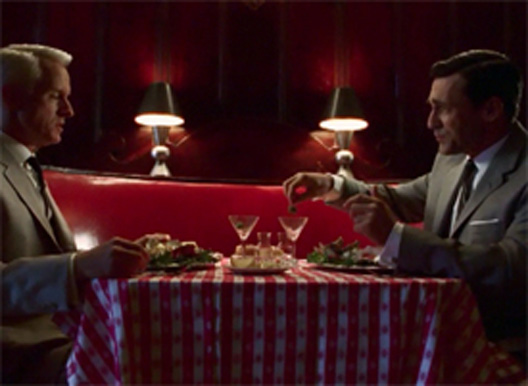 Not as glamorous as it once was, but it looks like Don Draper stopped by.

Throughout this period, much of the station, including the restaurant, fell into disrepair as money for maintenance grew sparse. By the late 1960's the restaurant was little more than a glorified coffee shop. In 1972 the Grand Central Oyster Bar went bankrupt and sat empty until 1974.

That is when the Metropolitan Transit Authority had the presence of mind to approach restaurateur Jerome Brody to come in and save the day. Which he did. 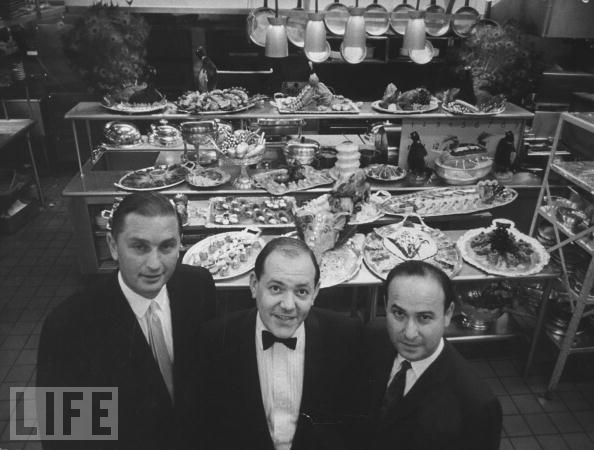 Brody, the Danny Meyer of his day, was, along with partner Joe Baum, the restaurateur behind such theme restaurants as The Rainbow Room, The Forum of the Twelve Caesars, La Fonda del Sol, and The Four Seasons. Brody explains what the place looked like when he went to tour the space in '74:

Reluctantly, I inspected what remained of its former grandness. The elegant marble columns you see in the restaurant today were then painted aquamarine over wallpaper. The wall covering was yellow Cello-tex™. The furniture was upholstered yellow, in unsettling contrast with the red table cloths.But he said yes, renovated the space, put care into a new menu and (soon award-winning) wine list, and reopened it, pretty much as the restaurant it is today. Though it was always an oyster bar famous for its pan roasts and raw offerings, this was the first time the entire menu became seafood-centric, and Brody set out to create relationships with fishermen and vendors. So it became a restaurant worthy of its location once again. And it stayed that way, even as its location fell onto hard times towards the end of the millennium. And then the restaurant caught on fire.

In June of 1997, a fire that started in a refrigerator in the kitchen raged through the restaurant, swallowing up almost the entire expanse of its cavernous space. The Times reports in 1997: 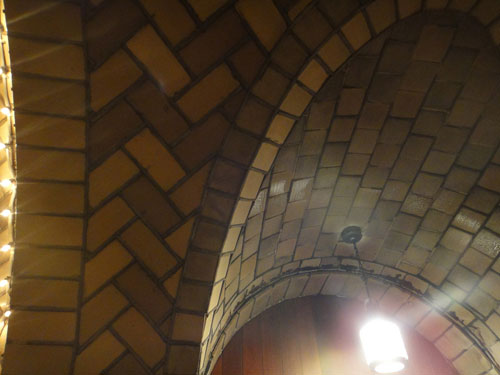 Sandy Ingber, who began as a fish buyer in 1990 and was promoted to executive chef in 1996 just before the fire, tells Eater that it took almost a year to get the ceiling back to its original state because it took over six months just to match the terracotta tiles and grout to the originals. But when it did finally and officially 100 percent reopen, it did so alongside the newly dedicated terminal, bringing all sorts of New Yorkers back to the area. He says, "Within the first year we doubled our business. It was amazing. All of a sudden Grand Central was a destination. Before that in the early 90's, this place was a mess, you had rats, you had bums sleeping in the ramps leading to the restaurant, it was a sad state."

Ingber also notes that their late 90's revival coincided with a growth in the oyster world. Due to the economic boom and the surplus of people with more money than they knew what to do with, there was an increased interest in oyster farming. "All of a sudden we went from 8 - 10 varieties throughout the 90's to 30 without a problem," Ingber says. Meanwhile, he began his tenure at the restaurant by making some back end and menu changes, weeding out a lot of the excessively expensive items and halting their weekly fish and vegetables shipments from Paris, noting, "It was great to have them, but we were losing money." He started adding new specials, which hadn't changed in 20 years, trying and failing with a club sandwich (which was popular but impossible to execute because they didn't have time to make toast to order) and striking gold with a lobster roll, still a best seller. Ingber is still the fish purchaser and goes to Hunts Point every morning at 3 AM to buy for the restaurant, and he promises he'll be at the restaurant until he retires.

More good news: the restaurant wasn't walloped over the last few years by the bad economy. Their best year was 2008, they were down eight percent in 2009, even in 2010, "And this year amazingly we're up 2.5 percent. Everybody else is down 30 or 40 percent and closing because of bad business, so it speaks for itself," the chef adds.

Now that Brody is deceased—he died in 2001 of lung disease—the restaurant is owned by a 14 of its non-unionized employees. And it sells 5 million oysters a year.