Share All sharing options for: New York's 10 Most Copied Dishes

New York chefs know that if you're gonna steal, you should steal from the best. Here's a list of 10 dishes that first received acclaim at one restaurant, and were subsequently copied by a bunch of other ones. 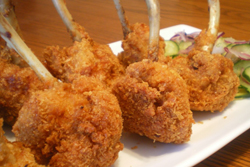 10) Chicken Lollipops: This is the kind of dish restaurateurs expect to see on every table — they're basically just fried or roasted chicken drummettes with the meat scraped to the ends of the bones. Chinese and Indian menus have always had some version of chicken lollipops, but the first time they ventured into trend land was in 2007, when they were added to the menu at Cafe Gray. Frank Bruni was a fan of them then, and now they're on the menu at over 35 restaurants throughout the city, including Co-Op Food and Drink, Del Frisco's Grille, SD26, The Mermaid Inn, and Le Cirque. [Photo] 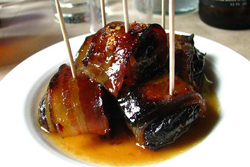 9) Devils on Horseback: This appetizer of bacon-wrapped prunes was first introduced to the New York dining universe sometime in 2004, but it's hard to say who served them first: Freemans or The Spotted Pig (they opened within months of each other). The important thing to note, though, is that Devils on Horseback became so popular that you can now find some version of them on Gastropub menus throughout not only New York, but the entire country. They are the snack of choice at The Libertine, Five Leaves, and Le Cirque, to name a few. [Photo] 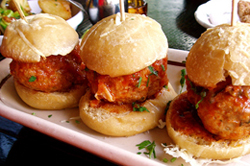 8) Meatball Sliders: Credit where credit is due: Joey Campanaro put these on the menu at The Little Owl in 2006 and people have been going crazy for them ever since. These tiny sandwiches are often imitated, never duplicated. [Photo] 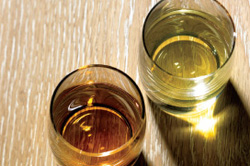 7) The Pickle Back: It's not a dish, but this trendy drink has taken New York by storm lately — it's just a shot of straight booze with a chaser of artisanal pickle juice. You'll see hipsters slamming these back at The Breslin and Death and Co., but the trend apparently started at the Bushwick Country Club in 2006, when the bar was sharing a basement with McClure's Pickles. As the story goes, one of the bartenders guzzled the green stuff after a shot of whiskey as a joke, but he liked what he tasted and decided he should force it upon paying customers. [Photo] 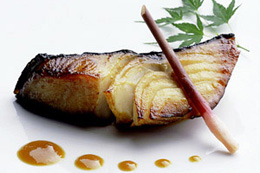 6) Miso Black Cod: It's true, Nobu Matsuhisa didn't invent black cod or miso marinade. But when he put them together, he created a dish that diners loved, and restaurateurs envied. 17 years after the opening of Nobu in NYC, copycat dishes can still be found at Asia De Cuba, Zengo, and countless others. [Photo] 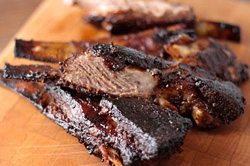 5) Lamb Ribs: Lamb ribs are just as delicious as pork or beef ribs, but vaguely more exotic, especially when brushed with an Asian glaze and topped with crushed peanuts. The first time these got some big press was in Frank Bruni's glowing review of Resto from 2004, where he mentioned them four times. Now, lamb ribs are on over 50 menus across the city, including China Grill, ilili, Fatty 'Cue, and Colicchio & Sons. [Photo] 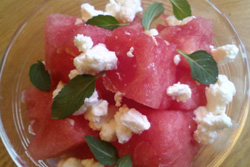 4) The Watermelon and Goat Cheese Salad: Watermelon and goat cheese? What an unlikely combination. Its originator may very well be Jean-Georges Vongerichten, who put this on the menu at Mistral Terrace (the patio of Jean Georges) back in 1997. Ruth Reichl raved:

Who else would have the audacity to offer a watermelon and peppered goat cheese salad? It is as unusual as it sounds, and it took a few bites to get used to it. Once I did, however, I was seduced by the juxtaposition of sweet and salt, the bright color, the crunchy texture. It was so refreshing I surprised myself by devouring the portion.

It's currently on the menu at Co-Op Food and Drink, Primehouse, Public, Graffiti, and many others. [Photo] 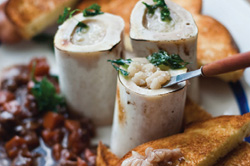 3) Bone Marrow with Onion Marmalade: Next time you are eating marrow on toast at a restaurant, thank Eric and Bruce Bromberg. They made bones and their custardy innards a hot dish at Blue Ribbon back in 1992, and their version, paired with onion marmalade, is particularly popular at other people's restaurants. If you want to put it on the menu at your own place, there's a good instructional video here. [Photo] 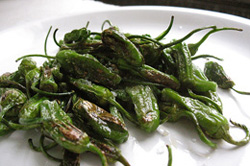 2) Blistered Shishito Peppers: This is one of those dishes that's going to seem really dated in about five years, but it's on a whole lot of menus right now. The first time Blistered Shishito Peppers were mentioned in a big review was way back in 2004, when they were one of the hot things to eat at Tia Pol. Now you can find them at places like The Lambs Club, The Vanderbilt, and, of course, Co-Op Food and Drink. [Photo] 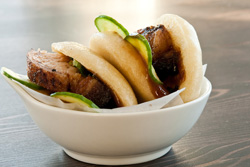 1) The Momofuku-Style Pork Bun: Yes, pork buns have been served in Chinese restaurants forever, and you can get them for a dollar below Canal Street where they're authentic, etc., etc. But seriously: David Chang's style of pork bun has been yanked by so many other restaurants, it's embarrassing. The Changified version is three slivers of pork belly on a soft bun with pickled cucumbers, scallions, and hoisin sauce, and right now you can find similar versions at Abe & Arthur's, Pier 9, Ruby Foo's, South Gate, and others. [Photo]