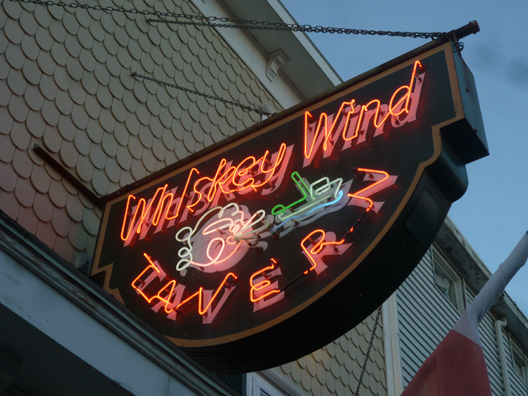 On this, the last big weekend of summer, "A Beer At" follows the vacationers to the east end of Long Island, to the North Fork, where the wonderfully named Whiskey Wind Tavern has been comforting old Greenport salts for three quarters of a century.

Most of Greenport's Front Street shuts down when the air turns cold, but the Whiskey Wind keeps its beacon on, offering the locals pool, foosball, a jukebox and a line of draft that includes regional pride Blue Point beer. Decor-wise, the only thing inside as interesting as the unique neon sign that heralds the bar's presence to the passerby is the old wooden bar, the round-framed mirror in the middle of which evokes a ship's wheel.

Old photos indicate this is the same bar installed by Bill Worth in 1940, when he founded the joint as Bill Worth's Rendezvous. Worth was a bootlegger who ran a Prohibition-era roadhouse by the name of the Worthwhile Inn. The bar was was then Meyer's Bar & Grill for a while before James Kuhlman bought it in 1993.

There's a sign behind the bar that reads "It's tourist season—why can't we shoot 'em?" But on a recent night, the Whiskey Wind wasn't dealing with too many tourists. And this being the north, not the south, fork, there was little danger of any slumming celebs. The stools were filled by locals and regulars, all men, all chatty, all about twice the age of the sweet, short, blonde and very young barmaid. The tavern is open until 2 AM, which is plenty late for this hamlet. You can be sure that the Whiskey Wind's lights are the last to go out to go out in sleepy Greenport.

The odd name, by the way, supposedly harkens back to the days when fisherman would wait out hurricanes or nor'easters—called "whiskey winds"—in their local saloon. So, was Irene a whiskey wind, then?
—Robert Simonson