If all goes well with the liquor licensing, Alain Allegretti will open his new restaurant Le Promenade de Anglais in the old Bette space in Chelsea on sometime next week, hopefully by Tuesday. This restaurant, like the chef's last one, Allegretti, will incorporate the flavors of Nice. But, as Allegretti explained at a preview this week, he wants to go much more casual this time around. He has no interest in tablecloths and no problem with burgers. To prove he's ready to walk the high-end casual line, he's outfitted his front of house staff in ties, aprons, and Chuck Tailors (which the chef was also wearing on Wednesday).

On his extensive menu the chef is offering salads, soups, appetizers (vitello tonnato, frogs legs Provencal), pastas (cuttle fish ragout), fish (whole branzino, monk fish in fig leaf), and meats like lamb chops (the most expensive dish on the menu at $34) and hangar steak ($27). He adds a burger for lunch and pancakes and eggs at brunch.

As for the space, it's not as dark as Bette and is trying to go for a fun, Riviera-like theme. There are murals on the ceilings, plush blue banquettes along a side wall, a raised second level of seating, and a table by the kitchen at which guests will be able to get a special chefs tasting. Check out the dinner menu below. 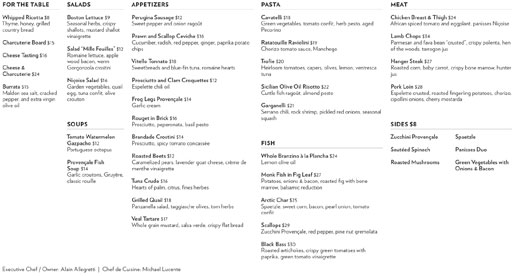