Back when the John Dory Oyster Bar launched its large format meal inside its basement kitchen this July, we speculated that the $100 a head plus $50 wine pairing and tax and gratuity meal was "no fantastic bargain," but would appeal to those who like the theater and the special treatment that come from sitting in the kitchen. However, an avid reader writes in to say actually it is a bargain, and though it may not rival a meal at the much lauded Chef's Table at the Brooklyn Kitchen, it's a good second, especially for a group. He writes, "Will it get 2 Michelin stars, three Nytimes stars and a six-week wait for a table? Doubt it. On the other hand, you can't get so much fresh seafood prepared well in any other joint for $95."

Eater asked the reader to send in some bullet points about the meal so others will know what they're getting themselves into: 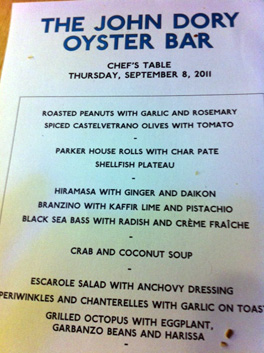 · Although the kitchen table dinner has been offered for several months, only a handful of reservations have been made. I believe we were the sixth party to be seated for this dinner.

· At the time of booking, the responsible person must sign a 3-page "contract" stipulating one's agreement with all the rules of the road, including price, finality of booking and cancellation policies. You must fax them a credit card and a driver's license at that time.

· The table, which is in the subterranean kitchen, seats 8 comfortably and up to 12, somewhat intimately. The temperature of the room is warm, although there is an air conditioning vent above the table. Most dishes prepared in the kitchen are raw or nearly raw, so the room never gets hot

· Each table gets a dedicated server as well as a busboy. If you order the wine pairing, the sommelier, Clara, makes frequent visits to the table to explain the wines being poured and answer questions from wine geeks.

· Service is attentive, personal and friendly. It is easy for guests to interact with the chef and line cooks, as well.

· It was made clear to us from the start that if we desired more of anything, all we needed to do was ask. The staff was very cordial about bringing more of several items to us.

· The meal was structured as follows:
— Upon arrival, guests find the roasted peanuts and the olives on the table
— Soon thereafter, server brought the Char Pate with Parker House rolls
— For twelve people, we were brought two three-level shellfish plateaux, containing a variety of oysters, clams, periwinkles, lobster.
— Four, not three crudo were then brought to the table (we also had a crudo of razor clams)
— Soup was then served
— Salad followed
— Periwinkles and grilled octopus followed

The quality of the food was outstanding and the preparations satisfied everyone. The quantity was far more than one could expect for $100 in any seafood joint. A few of us are wine geeks and couldn't imagine paying $50 for three glasses of wine. As it turned out, wine glasses were refilled constantly. A 20% gratuity was added to the check. With tax and tip, the check for 12 people came to just under $200 per person.