Roberta's Beefs Up Its Beverage Program

Share All sharing options for: Roberta's Beefs Up Its Beverage Program 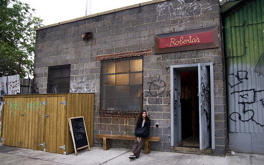 Once upon a time Bushwick was merely a not-so-savory place where college students went to buy pot or drink at bars that had little interest in the legal age. Then came Williamsburg’s artistic refugees—victims of gentrification and rising prices—and a little restaurant called Roberta’s. Suddenly Bushwick is “up and coming” and this aesthetically challenged neighborhood is seeing a new wave of stylish bars and restaurants.

But Roberta’s remains its beacon. It’s a spot frequented by Manhattanites looking to impress their friends with just how far out of their way they’ll go to eat at a hip restaurant with reputable food in an impossibly shitty part of town. And it provides exactly the sort of irony that makes Brooklynites smile on the inside.

Now more than ever it's catering to a varied crowd. For the first few years of its life the restaurant got away with a short wine list that featured what couldn't have been more than 30 selections. But in January of 2010 the restaurant poached Krista Voisin from the wine team at Otto to beef up the beverage program. Since then the list has tripled in size.

Voisin has kept the collection mostly Italian, with a small smattering of New York, Oregon, and Spain. Pricing can be a bit difficult to get a grip on here as some of the wines teeter over on the high side, particularly for Brooklyn, and others offer tremendous value (e.g. Monastero Suore Cistercensi Rusticum at $50). Here you’ll do best in the $30 - $50 range where you’ll find a number of regional Italian wines that will prove versatile and full of character. Some are off the now well-beaten Italian path, but most of the list will be fairly familiar for those who spend a good deal of time in New York’s trendier Italian restaurants.

The selection of whites stands out from the reds and the corner dedicated to orange wines wears some of the list’s best pricing ($34-160), which acts as a bone for the adventurous.

While there are some very interesting options on the low end, the high end offers very little that is worth the trip above $100. If you’re going to splurge do it modestly at around $75, which is where you will find the best bang for the buck over $50.

As a whole the list may be fairly familiar in the context of the city’s deluge of casual Italian wine lists, but let us keep in mind that what may be one small step for Manhattan is one giant leap for Bushwick.

Bang For Your Buck
Rusticum 2008, Monastero Suore Cistercensi $50
A handful (or two) of wino nuns produce this fascinating wine, with the help of famed Umbrian winemaker Giampero Bea (son of Paolo), at their convent just north of Rome. It's bronzey-orange in color with all of the savory qualities one would expect from orange wine with a nice floral lift courtesy of a solid percentage of Malvasia. One of, if not the best, values on the list.

Casavecchia 2009, Vestini Campagnano $30
Casavecchia is but one of many ancient Roman varietals brought back from extinction in the Campania region over the last decade or so. Little is known about Casavecchia’s origins, but some believe it is the same as grape as the Trebulanum variety that Pliny the Elder pined for some 1,950 years ago. Vestini is one of a handful of producers dedicated to its re-cultivation. Dark in color, fleshy, and aromatic.

Crowd Pleaser
Grillo 2009, Di Giovanna $36
Grillo is a white grape indigenous to Sicily (also known as the primary grape in the region’s sherry-like Marsala wine) that’s recently found favor as a stand-alone variety. Floral and citrusy with a good balance of acid to flesh.

Primitivo 2009, Rosa del Golfo $38
Polished, friendly Primitivo from this family-owned property that has been making wine in Puglia for over two centuries. Vinfication techniques are barebones save the temperature control that keeps fermentation temps low, preserving the freshness that Puglia’s heat can often challenge. Easy winner for a varied group.

Off The Beaten Track
Pignoletto Sur Lie 2008, Tedeschi $40
Alberto Tedeschi is one of Emilia-Romagna’s most interesting winemakers. He farms just two hectares of Pignoletto, an indigenous variety that was largely discarded in favor of more recognizable varieties. This version of the Pignoletto is a méthode ancestrale (or metodo italiano) bottling in which the wine is bottled before fermentation is complete and left to finish in bottle without the addition of yeast or sugar. The result is about as close to beer as wine can get: cidery in both aroma and flavor, dry, and plenty funky.

Under $40
Savuto 2006, Odoardi $34
Gaglioppo has replaced Aglianico as the favorite under-the-radar gem variety. Generally sports a N. Rhone-esque nose with Barbera sensibilities. This is a great deal on a wine that's had enough time in bottle to soften the grape's tannic edge.

Break The Bank
As mentioned, there isn’t much here that’s really worth splurging on. There are a handful of wines over $100, but they are either priced a tad high or there are simply better quality to price wines on the list near $75. If you are looking to spend around that much, look to Paolo Bea’s orange wine ‘Santa Chiara’ from 2008 (perhaps the finest vintage of this wine yet) at $75 or Joseph Pedicini’s Montebruno Pinot Noir, from the underrated 2007 vintage in Oregon, at $70.

WTF?
Though The Bastianich wines are certainly well made, there is simply a wealth of more interesting options for the price. There are three Bastianich wines on a small list of less than 100, a rare and curious sighting outside the Batali/Bastianich empire.
[photo credit]