Share All sharing options for: Per Se's Antonio Begonja and Gregory Tomicich 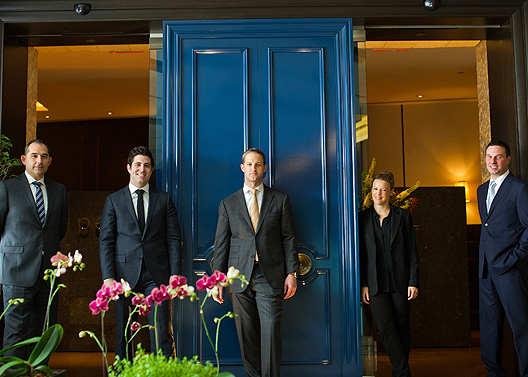 Thomas Keller's Per Se holds three of the restaurant world's most coveted distinctions: four stars from the New York Times, three stars from Michelin, and a top ten position on San Pellegrino's Best Restaurants list. Per Se is as popular now as it was when it opened seven years ago, but according to General Manager Antonio Begonja and Maître d' Gregory Tomicich, getting a table there is not as hard as you might think.

How far in advance do you need to call to make a reservation at Per Se? Gregory Tomicich, Maître d': We begin taking reservations exactly one month to the calendar date in advance.

Is there any leeway? Any chance of getting a reservation the week-of? GT: It's New York City, so people do make reservations one month in advance, but a lot of times when we call to confirm these reservations two days out, things happen. People have to change plans, and sometimes they forget that they've made that reservation. They cancel, and a lot of times you can call two days in advance or one day in advance and we'll have a cancellation.

And the salon is just walk-ins, correct? GT: Yes.

Is there generally a wait for the salon? Antonio Begonja, General Manager: It's hard to gauge it, but sometimes we have all the tables full and when people drop by, we'll say, "Come back in an hour or so," and sometimes people can just come right in and sit down.

Tell us about some of your favorite guests. GT: I don't know if I can pinpoint a favorite guest of the restaurant, but usually my favorites are the ones that allow us to basically enhance their experience from beginning to end. They come in with great expectations, and they let the chef, the captain, and the sommelier team do what they do best, which is make people happy. AB: I agree with Greg, I think our ultimate goal is to create an experience, a memory for that guest to take with them.

What's the strangest request that you've accommodated? GT: I don't know if it's the strangest, but it's definitely the most unique. We had an event in our private dining space; it was like a vintage dinner from the 19th Century. The menu itself was spectacular. Chef Keller did a lot of tableside service, but as far as the dining room side of it, we sourced out a lot of antiques specific to that era. We had the dining room staff in tuxedos, bow ties, and white gloves. We served a salmon coulibiac tableside, which we definitely benefited from because it took the chef a few different times to get the exact temperature. So, family meal for like a week beforehand was salmon coulibiac.

Any requests that you could not accommodate? GT: You know what? We're pretty lucky to have the staff that we have and the kitchen that we have. I think it's more of the physical space that makes us unable to accommodate a specific request. For example, if you want to have 100 people in our dining room, it doesn't fit. If you want to do 60 people at a rectangular table, it's impossible. So, that comes to mind more than any specific request. AB: Yeah, I think that's absolutely right. If there is something that we couldn't accommodate, we always have a back up plan to make sure that every guest is satisfied.

How did you come to be involved with Per Se? GT: I've been here for just over seven years now. It was an unfortunate day for the restaurant, but a very fortunate day for me. In February of 2004, there was a fire here probably about two days into service, and all The French Laundry team were here to help open up the restaurant. That night after the fire had happened, a few of the managers from The French Laundry happened to come eat at the restaurant that I was working at. I was fortunate enough to be their captain, and we struck up a pretty nice conversation, and they wondered why I wasn't here working with them. AB: I've been here just over six years. I was just looking to fill a void in my professional career, and I was talking to a very good friend of mine, and he recommended that I come here and see if I liked it. That very good friend is sitting right next to me today.

Tell us about the connection to The French Laundry. AB: Actually, I just came back from The French Laundry. We're all about communicating and exchanging ideas, so we try to go as much as we can. We go for a week and establish a close relationship with our colleagues there. They come here and we go there. It's pretty cool — we just show up and jump into service, and we feel at home. It's like being at your brother's house. GT: There's a feed between both kitchens. So our television shows The French Laundry's kitchen, and their television shows our kitchen, so there's always a sense of camaraderie. AB: We communicate in several different ways, and bounce ideas off of each other, and try to get the best of both places.

It has been almost seven years since your New York Times review. Are you anticipating a re-review? AB: We're always thinking about it. GT: We'd love it. We would definitely love to have the Times back again. We're pretty tough critics on our own end. On a daily basis, everyone here really critiques themselves and their own work, and we'd love to see the Times back.

You hold a very special place with four stars from the Times and three from Michelin. What's next in terms of accolades? A higher place on the San Pellegrino list? GT: No, I think that maintaining those stars is hard work enough. Without a doubt, it's a daily ritual. AB: With San Pellegrino, it is what it is. We're just humbled and flattered that they think of us, and if we can contribute to the overall industry, we're happy.

After seven years, is the restaurant considering any dining room renovations? AB: Well, we're constantly renovating, I find the room very serene and timeless — it could be at any point in time. The room is what it is, but we're always in the restaurant and it's a huge part of what we do, keeping it maintained. GT: We close the restaurant twice a year, and there's a list of things that are accomplished every year, whether it's re-doing the carpets or touching up the walls. But as far as changing cosmetically what the restaurant looks like? I don't think so. When Adam Tihany and Chef Keller designed the restaurant, I think what they were looking for was less of a fad and more earth tones that were, not necessarily timeless, but that wouldn't necessarily offend someone in ten years.

Do you ever find guests comparing Per Se and The French Laundry? GT: We actually had a guest, I forgot how long ago it was, he had lunch at The French Laundry, and then two days later he was having dinner here. That's pretty intense. We applauded him for being able to eat 18 courses in that short period of time.

Do you ever look at the service at other restaurants? AB: Yeah, I think about that everywhere I go — it's hard to disconnect. We're always looking at what everyone is doing.

When you're not here, where are you eating? GT: Pretty much wherever my wife and children choose. I leave it up to them. But actually, you know what's one of their favorites? BLT Burger. My kids and my wife love BLT burger. AB: I find myself going out with my wife more often now that my boys are older, so we just like something informal. Maybe we have a glass of Riesling and some crudo at the bar.

What is your most important gatekeeper tool? AB: Staff. That's why we can do what we do. GT: They make any request simple. It's about solutions, and they happen fairly quickly here. The type of individual that's attracted to work for Chef Keller is pretty intense to begin with. And then once you get them in this atmosphere where there are so many tools available to them? It's definitely the best. If we need to pull in an extra table for the dining room because of whatever reason, I have confidence in the kitchen and the dining room team that everyone is going to leave here with a smile at the end of the night.

Is there anything that you'd like to tell diners that have never been to Per Se? GT: Come see us, even if it's just for a cocktail in the salon.
· All Coverage of The Gatekeepers [~ENY~]
· All Coverage of Per Se [~ENY~]