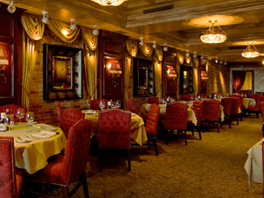 While there are many tales to be told within the walls of our restaurants, one of our favorites took place at our original location in Bayside, Queens in 2010. Three people came in for a meal- two women and a man. As soon as they saw our logo napkins they proceeded to put one in the man's jacket. They giggled as I was watching from across the room. They became more bold, assuming they were free and clear to take what they wanted. The women began to fill his clothing with silverware, napkins and anything not bolted down. In between stuffing his pants they finished their meal, and paid the bill leaving a generous 10% gratuity.

Being the gentleman that I am, I held the door open for them as they walked outside. Once in front of our restaurant I asked "Did you enjoy everything," to which they replied "Everything was great." I then asked the gentleman to return all the stuff in his pockets. Instead of doing so, he decided to play dumb. I then politely gave him the option to return everything or explain his actions to the police. Given the choice, he proceeded to give back approximately fifteen pieces of silverware. I asked if there was anything else, and he said no. Observing a piece of cloth in a precarious location, I stated "You can keep the napkin hanging out of your pants."

Next up, GM for the steakhouse's 9th Ave. location, Muhammed Yaseen, loses a bear:

Uncle Jack's is a popular spot among those seeking a “power” lunch or dinner, so it's not uncommon to have guests from the financial district come to visit with us. As such, one night we had a few guys from Wall Street who had dinner and plenty of wine to drink in our Westside location near Madison Square Garden. At some point during their dinner, they came to the front to take a closer look at the bear affectionately called KOBE who had been with us for over six years. KOBE was a popular target for those with too much time on their hands, and had been stolen a couple of times in the past. Luckily he made his way back to Uncle Jack's each time. After their meal, the guests came to the host stand and asked our hostess Courtney to get their coats. As soon as the hostess turned to go to the coat room they proceeded to swipe KOBE from the stand and passed it under their arms like a secret football play to the back where one hid him away. After receiving their belongings they left with KOBE. By the time we realized, they were long gone.

We proceeded to call them the next morning, and they were shocked and surprised that we were accusing them of taking KOBE. I told them it is bad luck to steal him. Eventually they caved in, confessing that they had taken KOBE but were too drunk to remember where they had left him. We called the cab company, they checked their bags, and everyone searched the streets near the restaurant and along the path they took home. Unfortunately we never got our KOBE back, and the only number we had for the thieves was soon disconnected. I am quite sure he will be back, and believe the guys who stole KOBE will have bad luck. I am hoping to see the day when we find him in someone's office or on a homeless person's shopping cart. If you see KOBE... bring him home!