Welcome back to I'm Begging You!, a new feature in which Eater fans beg/plead/pitch their favorite restaurateurs for a new concept in their respective neighborhood. Want to play? Email tips@eater.com. 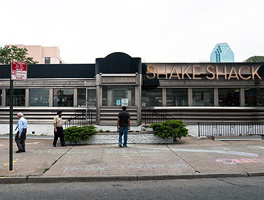 Here a reader has a request for Danny Meyer from a Long Island City resident who works in Midtown:

I live in Long Island City, which is steadily improving in the food department (hope M. Wells stays in the neighborhood when they figure out what they're doing). Last week I read on Eater that a Corner Bistro is coming to the area, which is fine (I like the original, but never crazy about their burgers. Not flavorful in my opinion). Anyway, it got me thinking that what my neighborhood really needs is a good, honest-to-god cheeseburger. Specifically a Shackburger.

Would it kill Danny Meyer to put a Shake Shack in Long Island City? It sounds like he's already opening them up everywhere else. Maybe put it down by Hunter's Point -- there's a lot of families there -- or near PS1 where people are always coming and going. That way, the guys that work in the Citi Building could also finally have some place good to go eat lunch. I work in Midtown, so it's not impossible to get Shake Shack during the week, but I would love nothing more than to be able to eat a Shackburger with my family, without having to take the 7-Train on the weekends. The neighborhood is rapidly developing too, condos going up everywhere, and there are precious few restaurants here.

Just think about it Danny. Maybe it could have fake sand like Water
Taxi Beach.

Just think about it Danny.
· All Editions of I'm Begging You! [~ENY~]
· All Coverage of Shake Shack [~ENY~]