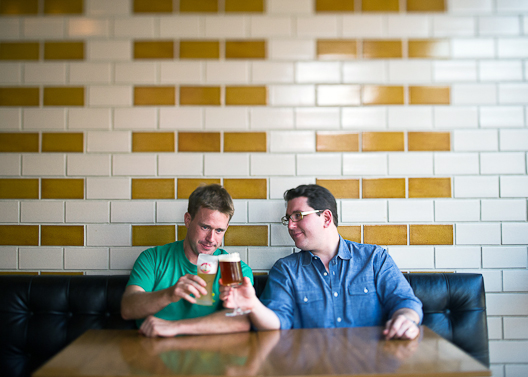 Vandaag is the critically acclaimed East Village Dutch/Danish bistro from restaurateur Brendan Spiro. There have been some changes at the restaurant recently: opening chef Phillip Kirschen Clark is no longer in the kitchen. His former sous chef Seth Johnson is now in charge, and he's been there since day one. Right now, Brendan and Seth are working to bring Vandaag back to its roots as an all-day neighborhood bakery, bar, and restaurant.

Brendan Spiro, Owner: It was going to be a Scandinavian bar, and my architect and I started riffing on the fact that the Dutch and the Danish have so much in common. When we started to investigate the culinary side of it, we saw a lot of technique and ingredient crossover. With the Dutch, it allowed us to bring in a wonderful beer program and concentrate on the bakery aspect of it all, and then the Danish allowed us to incorporate some of those interesting cooking techniques that Seth uses like hay smoking and the mass pickling, which they do in Holland and well.

Did you take any trips out there before opening? BS: We did. We went to Holland prior to opening. Trying to investigate Dutch cuisine was pretty interesting because they don't really have a cuisine to speak of — they've sort of taken on little bits of other peoples' national cuisines. But we found dishes that were very dear to them, such as the bitterballen, which is the oxtail croquette, and the hete bliksem "hot lightening," which is the smoked bacon with the crisp apple and the stroop syrup.

There aren't very many restaurants serving that kind of food in New York. BS: It's a super underserved cuisine type, and that's why we really wanted to jump into it. It wasn't a sort of trend-watching foray. We jumped into it because we were really excited by those regions, and those flavor profiles. We wanted to bring that to the market.

Seth, where were you coming from before opening Vandaag? Seth Johnson, Executive Chef: I was at a small club on 14th Street called Norwood, and prior to that I was at Insieme and Eleven Madison Park. I spent some time at Resto, so I was somewhat familiar with the cuisine of that northern area.

How was the opening? BS: It was my first opening that was in the late summer, and it was interesting to see that we were allowed that breathing room to do a soft opening. We always knew that we wanted to really get our sea legs prior to everyone coming down and enjoying what we had to offer. We did the bakery, lunch, and brunch.

Did people check it out? BS: Yeah, people were very interested. I think the idea of Dutch and Danish food was really interesting to the New York community, and I think it just took off from there.

Did you make and changes after opening? BS: I think the original menu had a core group of ingredients that were approachable enough that people could get into it. But, I think people had a problem with the names of the items. And so, offering broader descriptions and a less minimal-sounding menu was one of those hurdles we had to go through. SJ: Yeah, and I think after that first menu the cuisine did get a little inaccessible. I think that it became a little bit more composed and it got away from the sort of neighborhood feeling that we were opening with. But the flavors were still there, and it was all still very nice. It was just a bit more challenging than I think people were expecting, which is a hard thing to do for a brand new restaurant. And that's something where we're trying to take a step back and reevaluate now. BS: We're basically going back to the original menu, the original concept. It's the reason why we achieved a strong following, and why the media warmed up to us. It's always supposed to be approachable cuisine with tons of technique behind it, but offering a different flavor profile than what's available, and using the best ingredients. That will never change.

What was the review process like? SJ: Fast. It happened in no time. It was over as soon as it started. We had both of the big critics in at the same time. Sam Sifton and Adam Platt were sitting next to each other at one point. BS: Yeah, at one point we were pretty convinced that they texted each other. That was pretty nutty. But, you know, we did what we felt we do best, which is serve them like the rest of our clients, with authenticity and a strong sense of hospitality.

It seems like both of those critics really connected with what you were doing. SJ: I feel like we were most "in the moment" when they were in. Speaking for myself, it was like, "Wow, this is it. This is what you really want when you open a restaurant." Breathe into it, embrace it, and have a good time. BS: It was totally exhilarating and exciting to have the light shined on you, and it's a time to really stand up and be who you trained to be.

Did you make any changes after the review? BS: I think we dabbled with some more luxury items for a little while, but again, our clientele is really so important to us. They've always keyed us in to what is going to work, and what is not going to work. And even though we came out with a very high-level concept, the customers have always led the charge on what is going to be the tolerable level of acceptance.

You guys got some press for working with foragers. Have you developed more relationships with them over the last year? BS: Believe it or not, foragers are not just coming out of the woods, so to speak. Yeah, we still have a relationship with one of the guys up in Maine that we do business with, and I think there are other companies that are trying to use more foraged ingredients, and we have relationships with them as well. But that dovetails with the farmers market, or the local ethos. If you can get it foraged? Great. If it's coming from a local farm who is doing it right and growing it well? Perfect. We're looking for taste over gimmickry or trends. And I think it's gotten to a different level right now.

So, what have you learned about the cuisine over the last year? SJ: A lot. The bread baking for one, and I like dill now. Honestly, I've learned how to not create a cuisine, but interpret a cuisine. It's something that I didn't know about, and a lot of us didn't know about. But it's basic ingredients, and you learn how to balance those and work with what you got and sell it as a food, as a take on a cuisine. And I think that's what we've done really well. BS: Restaurants should be obligated to provide new and interesting flavors, ingredients, and products to the market. That's what we do. And I've always believed in that — it's a philosophical approach. SJ: It's how you keep your business fresh and it's how you keep people coming in. And obviously, there's got to be a certain comfort to the food that you serve, a familiarity. BS: I think that's the influence of New York, quite frankly. That's one of the background ideas of Vandaag. Vandaag means "today." So, what are you doing today? How are you changing up your menu today? What's going on today with your menu and your clients? So, I think we keep that in the forefront of everything we're doing here. And I think we're having fun. I think it's totally acceptable for us as trained culinary people to be playing with all shapes, sizes, and themes — I think that's good. I think that's the story of modern dining, to be honest with you.

What are you working on right now? SJ: The approach right now is all about summer. The farmers market has mother nature's bounty right now, food that needs to speaks for itself. BS: We're leaving the tweezers and the sous vide bags at home for now. I believe that we'll always be true to our concept, and that we'll continue to do what we've always done which is cook honestly, from local sources, and to constantly innovate. SJ: Right now my favorite thing on the menu is the corn soup. We wanted to do a chilled corn soup, and we were wondering what to do with that. At the same time, we started doing the seaweed focaccia, and I just thought, "Alright, there's a dish." That's something different, but it's corn soup. It's a puree of corn, a little peppercorn, a little bay leaf, and then we have a salad of some seaweed and chiles, and a little more raw corn. It's satisfying and soulful, but it's honest and straightforward as well. BS: And it's got those Nordic elements, and a mix of Nordic and Dutch, which is undeniable.

How is business during these dog days of summer? BS: Yeah, walk-in traffic has been just dynamite this summer, and the bar has had a significant uptick. We're almost at full tilt boogie right now.

Do you have any thoughts on expansion? BS: You know, there will never be another Vandaag, in terms of it being a sit-down restaurant. I think it lives in this neighborhood, in the East Village, right now. However, we'd love to do something with the bread program, and play with that. That's something that could be in the works.

Bread production takes a lot of space, correct? BS: High production, yeah, but what we're looking for is retail, possibly in another neighborhood. Play off the coffee and those parts that work together, a market-retail thing.

What else do you have in the works? BS: I think we're going to investigate a rijsttafel. A rijsttafel is the Dutch version of an Indonesian rice table, directly translated. On probably Monday evenings, we're going to transform the restaurant into a Dutch-inspired Indonesian restaurant. It will probably be a prix fixe format, and we're going to have the rice, and they're amazing with Belgian beers and Jenever. That's really what they do in Amsterdam: when you go to an Indonesian restaurant, they have the rijsttafel and the Belgian beer and the Jenever, and I'd love to bring that out here. And when it's done right, it's amazing. We're talking about 20-25 different curries, dishes for vegetarians, and this rice as the staple of it. SJ: I think the colonialism of the Dutch is something that we're investigating even further, because there are so many influences from the West Indies to South East Asia.