Share All sharing options for: Ambassador Flores Gets Honduran Cuisine in Jersey 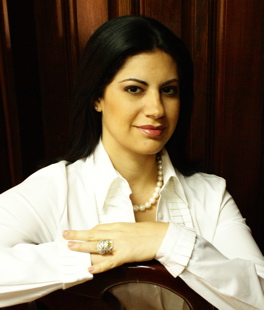 Before her appointment as Ambassador, Mary Elizabeth Flores Flake, the daughter of former Honduran President Carlos Roberto Flores, served as a Member of the National Congress of Honduras and as First Vice President. Here she discusses her top picks for New York City dining, and about having to cross the river for good Honduran food.

Have you been able to find traditional and good Honduran food in New York City? Where? Not in Manhattan, but in Morristown, New Jersey it is called "Centroamericano."

What are some of your favorite dishes of Honduran cuisine to get in Jersey? Corn tortillas with Honduran cheese called quesillo and conch soup.

What do you like to eat around the UN and your embassy? My kids like pizza with caviar, I like Mediterranean pizza. For Italian I got to Il Postino, I like their Chilean Seabass. Smith and Wollensky, "El Colorado." I go to Megu for Japanese, El Perigord for French cuisine. Everything is great at The Palm I and II.

What do you crave that New York City just doesn't have? A Honduran seafood place, and more Cajun and Creole restaurants. My mother’s family is from Louisiana.

What New York City restaurant do you miss when you go back home? Grand Central Oyster Bar.

Do you cook Honduran food? I sure do. I am not a great cook, but I can fix some good appetizers like ceviche or cheese fondue.

Tell me a bit more about the cuisine of the Honduras, what are some of the national dishes, and ingredients regularly used? Central America including Honduras before our independence was one with Mexico so a lot of our food is similar but not as spicy. We also have a Caribbean influence; the spices make for very tasty soups and seafood dishes.

What's your favorite expense account restaurant? Fabio Piccolo Fiore—I like their pasta with truffles and Fabio is friend to many ambassadors.

Are there any American specialties you've grown to love? I love all Southern food, I often crave hamburgers and hotdogs.
· Previous Editions of Ask the Ambassador [~ENY~]