Share All sharing options for: 10 New Restaurants for Adventure Dining in NYC

Are you tired of the same old burgers, pastas, beet salads, and pork belly sliders? Here's a list of ten new critically acclaimed restaurants that offer out-of-the-ordinary dining experiences. Some require a long subway ride, others are located in the heart of Manhattan. A few are very expensive, but many are dirt cheap. 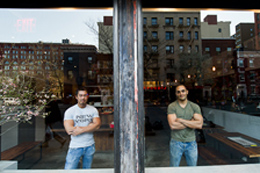 10) Takashi: At this West Village yakiniku parlor, you can order a number of uncooked beef dishes, or raw beef parts that you cook at your table on a grill. Takashi sources their offal from the best meat purveyors in New York, but if it all sounds a bit too intense for you, there's a fine rib-eye on the menu, and a number of fresh vegetable sides to choose from. [Eater Place Page] [Krieger] 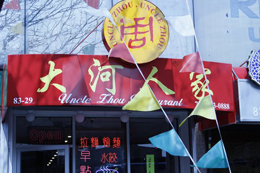 9) Uncle Zhou: Uncle Zhou is one of a handful of places in the city serving the specialties of Henan, China. This sparsely decorated new Elmhurst restaurant serves many of the signature dishes of this style of cooking, including knife-shaved noodles and da pan ji; a large plate of chicken and potatoes bathed in a peppery red sauce. They also offer a bonkers taosibao, which is a quail stuffed inside of a squab, stuffed inside of a chicken, stuffed inside of a duck ($225, requires two days of advance notice). All dishes (aside from the turducken) are under $20, and if you have no idea what to order, the servers will be more than happy to talk you through the menu. 83-29 Broadway; (718) 393-0888. [Photo] 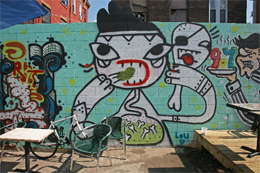 8) Do or Dine This kooky new Bed-Stuy restaurant has received a lot of press because of its brushes with animal rights activists and the Brooklyn police department, but they also serve good, at times very bizarre food. Two of the chefs are veterans of The Modern, and here they're cooking what you might call "ironic, gourmet junk food." The big standouts so far are the foie gras-stuffed donuts, the Nippon nachos (gyoza smothered in gouda and fancy sour cream), and the chorizo breadcrumb-coated escargots. [Eater Place Page] [Photo] 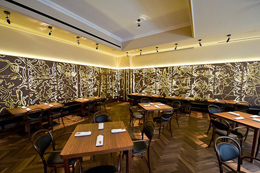 7) Hospoda: Hospoda is one of a kind in New York: it's a stylish, reasonably priced restaurant serving a menu of modern Czech fare from an acclaimed European chef. Some critics think that the kitchen hasn't quite reached its full potential yet, but so far most people agree that it's a great place to enjoy dishes like rabbit aspic or smoked beef tongue while washing down a few beers. Also: if you like, you can get a glass filled entirely with Pilsner Urquell foam. [Eater Place Page][Krieger] 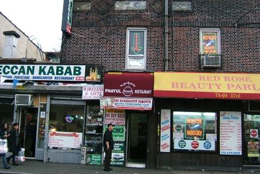 6) Phayul: This Jackson Heights restaurant serves many faithful versions of Himalayan specialties like momo dumplings and blood sausages, as well as a number of unique Tibetan-Chinese dishes. Robert Sietsema was particularly impressed by the use of spicy Sichuan peppercorns in things like the tofu with brown sauce. The dining room is not without its charms — it's a relaxed second floor space with windows that look out onto the hustle and bustle of 74th Street. [Photo] 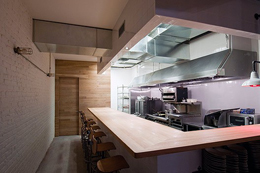 5) The Chef's Counter at Hecho en Dumbo: This year-and-a-half old Bowery taqueria recently launched a chef's counter that serves a five-course menu of exotic fish and game, prepared in a Mexican style. A recent menu included lamb saddle three ways, cuttlefish with fennel and lamb's ear, and venison tartare with sour orange, cucumber, and avocado. At only $55 per person (with an optional $28 wine pairing), it's also something of a value. Reservations can be made on the restaurant's site for parties no larger than two people. [Eater Place Page][Krieger] 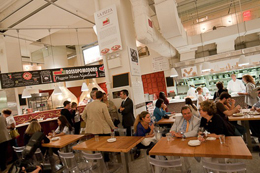 4) Manzo: Lidia Bastianich's white table cloth restaurant inside of Eataly offers a unique dining experience for those that want to enjoy Italian-style meat, with a pasta course or two. Although they no longer serve their epic Piedmontese beef tasting, Manzo's current seven-course menu features a handful of nose-to-tail treats like seared foie gras with crispy pig tails, scallops with guanciale, and a main course of beef loin, tongue, and tail. The menu is $90 per person, with an optional $60 wine pairing. [Eater Place Page][Krieger] 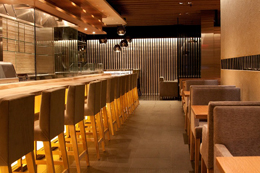 3) Mr. Robata: The new Times Square Japanese restaurant with the stupid name has two very talented chefs in the kitchen: Masaki Nakayama, formerly of Sushi Yasuda and Corton, and Kenichi Ogawa, a veteran of Sushi of Gari. Together, they've created a menu that includes sushi, robata-style dishes, tapas-like small plates, and entrees that blend Japanese, French, and New American cuisines (think spring vegetables with a miso and anchovy fondue). There's a lot going on, but so far the early word is very strong. You can sample both the sushi and the composed plates by ordering their nightly $40 three-course prix fixe. [Eater Place Page] [Photo] 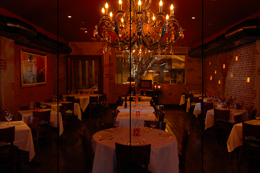 2) Patricia's: Gael Greene recently filed a rave for this new Bronx Italian restaurant, with most of her praise directed at the inventive Italian-French cuisine of chef Alessandro Borgognone. The menu features things like a hefty veal Milanese topped with a medley of crunchy raw market vegetables, and sea scallops over pea puree with a sprinkle of pink sea salt. But if you just want a traditional Neapolitan style pizza, they make those too. The cellar boasts over 700 bottles of wine, which the owners claim is the biggest collection in outer-boroughs New York. 1082 Morris Park Ave, Bronx, NY 10461, (718) 409-9069. [Photo] 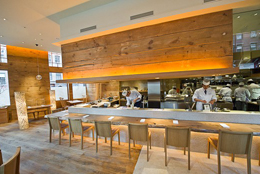 1) Brushstroke: It's not cheap, but many critics have been blown away by the food at David Bouley's stylish new Japanese restaurant. Brushstroke is a collaboration between Bouley and the Tsuji Culinary Institute, and the kaiseki tasting is the thing to get here: eight or ten courses of beautifully presented, French-influenced Japanese food. Brushstroke has been in the works for the greater part of 15 years, and the result is one of the most interesting, and ambitious restaurants of New York 2011. [Eater Place Page][Krieger]