Share All sharing options for: This Month in New York City Dining, 1987

Occasionally, we like to look back on other periods of New York dining. Here now is a rundown of what was abuzz in the city 24 years ago: August of 1987. 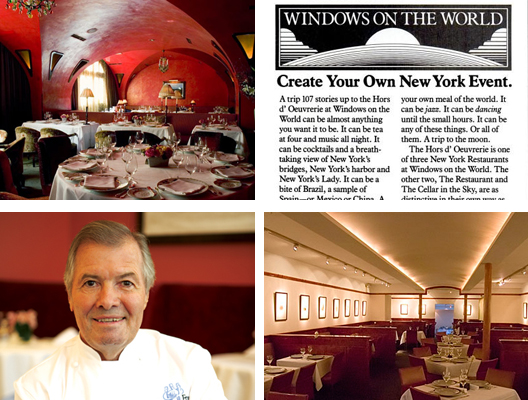 Dining News: Bouley, Bice, and Bellini: This month in 1987, there were two big openings that everyone was talking about: Bice (still in operation at 7 East 54th), and Bellini by Cipriani (long gone; the space now houses Insieme). Bryan Miller called the former "the biggest hit in this neighborhood since the Vienna 1900 exhibit," and noted of the latter: "The food is uneven, service excellent; prices are sky high. " The NYT also reported that "a sleek new California-style restaurant" was coming to the CBS building in Midtown called China Grill, and that "Scandinavian dining will return to New York for the first time in many years this October with the opening of Aquavit."

A former manager at Auntie Yuan named Jimmy Chin took much of the staff of that restaurant to a new venture called Chin Chin. Most exciting, perhaps, was the news that a talented vet of Montrachet had opened his very own restaurant in Tribeca called Bouley. Jacques Pepin was also hired as a consultant at The Russian Tea Room this month, as they attempted to take the menu in a slightly different direction. Windows on the World was advertising its "Hors d' Oeuvrerie," and a celebrated designer named George Kazantzis opened the first location of an ambitious, modern, health-focussed pizzeria called Pizzamerica — it showed music videos in the dining room. 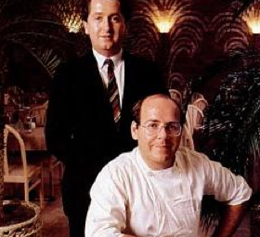 Gael Greene liked the room but not all of the menu at Le Palmier in the Flatiron, and had a fun time at Bellini, despite the crummy food. Her review concluded: "You may love Bellini. All my voyeuristic friends do." Ms. Greene also strongly recommended the crustaceans at American Festival Cafe in Midtown.
[pictured: Bertrand Bara and Jean-Marc Rancher of Le Palmier] 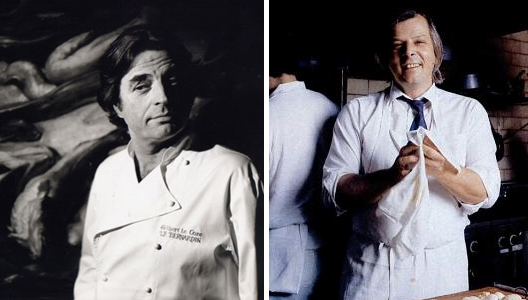 [Gilbert Le Coze; Paulo Lattanzi]
Odds & Ends: Flo Fab traveled to Brittany for a profile of Gilbert Le Coze, the chef and owner of then one-and-a-half-year-old restaurant Le Bernardin (it includes a recipe for Moules a la Mariniere). New York also ran a compelling piece on the Lattanzis, an Italian restaurateur family that "defied almost every trend that has fueled restaurant madness in the city." At the time, they had six establishments in the area: Trastevere, Trastevere '84, Erminia, Lattanzi, Albero d'Oro, and Trastevere Forrest Hills. None of them were chic but all were popular, mostly because they served pitch-perfect Italian food. Of the lot, only Erminia and Lattanzi are still around.
· All Coverage of New York Restaurant History [~ENY~]