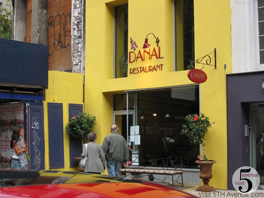 1) Greenwich Village: Greenwich Village restaurant Danal hasn't answered the phone for days, and a tipster may know why: "Not sure when it officially happened but Danal on 5th closed. I walked by last Thursday evening and there were two ladies outside collecting fixtures and furniture items as they were being discarded." [ShutterWire]

3) Upper West Side: Per a tipster: "It appears that Indian restaurant Earthen Oven at Columbus and 72 St is doneski. They have been closed since Tuesday- phone goes unanswered and a call to Columbus Gourmet next door (same owner) confirms the closing. The person who answered the phone at Columbus Gourmet said 'it was too expensive to operate.'" [ShutterWire]

4) Tribeca: Zagat hears David Bouley's Bouley Studio is closed for remodeling, and a commenter reveals they are changing the decor and changing the concept to a private event and catering space. [Zagat]