Share All sharing options for: Steve Schneider, Principal Bartender at Employees Only 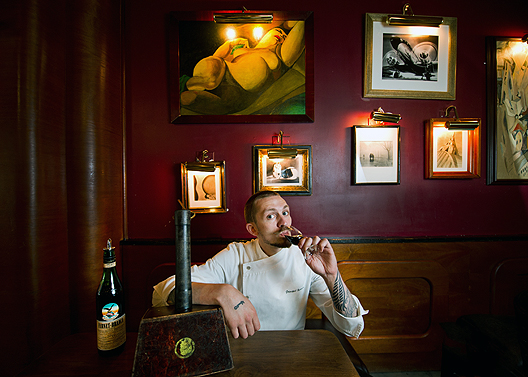 Steve Schneider is the youngest of the five principal bartenders at Employees Only. Last month, Steve and the rest of his team traveled to New Orleans for the Tales of the Cocktail event, where they won the coveted award for Word's Best Cocktail Bar. He loves what he does, but bartending wasn't his first career choice: as a young man, he was a member of the Marine Corps until a training accident nearly killed him.

What's the busiest time of the week? Steve Schneider, Principal Bartender: Cocktail hour is early and we have a nice dinner service from 6PM until midnight, but I'd say midnight until closing — it could be any night. People show up then, and we get excited about that.

What's the most popular drink? Right now our biggest seller is called the Amelia. It's a vodka-based cocktail with elderflower, lemon, and blackberries, and it's delicious. We also have a cocktail called the West Side that's like a South Side fizz cocktail, or a Vodka Collins with mint, more or less. We have a lot of different cocktails to appease everybody. Just a wide array of spirits and a lot of different styles: tall, short, up, stirred, shaken, citrusy, boozy — you name it.

Do customers ask you to make bespoke cocktails very often? Of course. And we ask the usual bespoke questions: What spirit do you have in mind? What flavor profile? Stirred and boozy? Shaken? Up? Rocks? Fruit-driven? So, you know, more often than not we figure out what they want. You can't always get it right every time, but we've been doing this a long time, and it's fun to get to know somebody by what style of drink they want. Also, it's fun to try to impress them a little bit and make them feel like that drink that you're going to create is a drink just for them. People ask me all the time about what my favorite drink is, but what does that matter? You're paying, you get whatever you want. That's our main thing — having a great time and making sure that everybody is happy.

Tell us about your favorite customers. There's so many, and they range from beer and whiskey drinkers, to people that love to enjoy cocktails. My favorite are the guys from the industry that come in, because those are the people that I have a lot of respect for, and those are the people that we learn from. Any celebrities? We get our fair share, but we don't tend to pry. They're here, they're there, we let them have a good time. This place gets kind of dark for a reason.

What does it take to get a buy back at Employees Only? Say please, thank you, have good manners, tip well, and I'm going to show you respect back. Respect the house, try something new — stuff like that. We feed off of the energy here and we feed off of each other. I love buying a shot for someone that's having the time of their life, because it's fun for them. When I first came in here as a customer, I loved the way that the guys worked together. They're moving, they're shaking, they're studs up there, and I wanted to do that. We bust out cocktails like one unit. No one bartender thinks he's above any other. We have respect for each other and where we work, and that's from the ownership and the leadership that we have. There's a lot of things that make a great bar. You can make the best cocktails in the world, but if you can't work as a team, I don't think that bar is going to be successful as it is. That's something that I don't think you can teach. [Laughs] I like to preach the stuff that you can't teach.

Are there drinks that you don't like to make? I don't have those. Any normal bartender would say, "Drinks that take a lot of time when you are really busy." But you know, I'm privileged to say that I'm busy, and we're taught to respect making drinks for paying guests. We all have egos, but once these doors open, egos go out the window. We are taught to be humble and gracious, and make them whatever they want. So I have no prejudice against any drink at any time.

Do you have a favorite drink to make? Starting out early, if you're eating some dinner, a Manhattan cocktail is my favorite. It's the first drink I teach any bartender. The original Manhattan cocktail that we make is a lot different than what you'll find at other places — it's not your contemporary Manhattan where it's bourbon, a little bit of vermouth, a cheap plastic cherry, and bitters. The recipe that we use is based on Jerry Thomas's cocktail guide from 1862, where it's actually a vermouth cocktail. It has more vermouth than it does rye whisky. We use a 100-proof rye whiskey, because it can stand up to the vermouth, and also we use an orange curacao, and three extra bitters. It creates a nice balance. It's a cocktail to start the night off with — it's always good to start off big and boozy and slowly work your way down.

How do you cut off a guest? That can be tricky. That's something that I try and work on. The best thing to do is to let your whole staff know. Let your management know, chat with the doorman, ask him to keep an eye on the situation. A lot of times I keep giving them water and sodas. I say, "Hey, I'll be right there," that sort of thing. Try to relax, and be as subtle and professional as possible, because it could be embarrassing as well. That just takes a lot of time, and everyone's different, too. Also, you can go up to the most sober guy in the group and say, "Hey, I like you guys a lot, but your buddy's getting a little drunk." It's all on a case-by-case basis.

How did you get into bartending? I've been doing it since I was 18, so a third of my life. I'm a former United States Marine. I spent four years in the Marine Corps, I finished the top of my class in boot camp, I was promoted, I did intelligence work, and I had a choice to do whatever what I wanted to do. I volunteered for 9/11, and I volunteered for this elite unite that was headed first for Japan and then for Afghanistan. Unfortunately, I had an accident during training. There were three plates in my head, and I went into a coma. This was eight years ago last week, actually. That ruined my military career, which was something that I was very passionate about. But the good thing was that I was bartending while I was there, because once you're in, it's a nine to five kind of job thing. So, I took a job in Washington DC where I was stationed, I was working in the Pentagon area, and I embraced being behind the bar. Initially I was doing it to pick up chicks, and to make a few extra bucks. I started in a dive bar and I didn't care, but it taught me how to move my ass. And then I moved to the molecular stuff, and Employees Only sort of made me what I am, which is a member of an awesome team.

Tell us about this big hammer that you use. This has become my personal thing. I believe in Employees Only — they're my family, they're who I look up to and respect. But this is something that I went off the path with. A year and half ago, Dave Wondrich was here doing some sort of video or something, and he was crushing ice with a wooden carpenter's mallet. I helped set up the bar for him, and I thought that was really cool. I mean, it's been done before, but he had it in this canvas bag, and he was smashing up ice — a lot of drinks require crushed ice, like swizzles, Mint Juleps, and stuff like that. It brings a whole other dimension to the drinks. Anyway, I saw it and I wanted to do that.

Who made it for you? A gentleman named Drew Hamilton, he used to work here, he's one of our old apprentices. His family is a group of carpenters from Idaho, and he's a sculptor as well. So, I had a mallet that was pretty big, and I said "Hey Drew, can you make me one that's three times as big as this?" It's a lot of fun to maniacally smash ice, and it turns peoples' heads and gets them immediately interested and involved. I touched upon my injuries and stuff like that, so the hammer has now become my signature tool, but also a symbol of strength, building for my future, and overcoming adversity. It's like in the Thor movie. They say, "It's a tool to build, or a weapon to destroy," and I use it for both. And it's hard, when you've been told...when people tell your parents that you're not going to make it, and you make it anyway and you survive. And...I don't know. The hammer is just kind of an inspiration, a reminder to keep building, and it's a symbol of strength. Building together with giant smiles and laughter. That's something that I run with, and people dig it. They laugh, it's funny, it's a blend of those things, and that's basically been my calling card, of sorts. Also, I'm a big comic book geek, so I love carrying my Thor hammer around.

When you're not at Employees Only, where do you like to catch a drink? Ward III is one of my favorite spots. I think they have great bartenders at Mayahuel. I love bringing people to Raines Law Room. I don't venture out in Brooklyn as much as I'd like to, even though I live there. But I will be going there more as more of my friends and former colleagues are opening places of their own. And that is exciting for me, because the owners here preach that. They want us to own our own places some day. It's like a lineage — who learned from who?

What's the best thing to order at Employees Only? Well, aside from our steak tartare, which is phenomenal, I love our Manhattan cocktail — I will always preach it. But I would encourage you to pick our brains and not order anything in particular, because everybody's taste buds are different. Come in, have an open mind, and have a good time. Nobody's judging you.
· All Editions of The Barkeepers [~ENY~]
· All Coverage of Employees Only [~ENY~]