Throughout the week, veteran restaurant critics have offered accounts of the worst shitshows they've ever encountered, continuing today with the Village Voice's Robert Sietsema, who sat down with us at Biererria (not a shitshow, it so happens). Want to submit your own story of shitshowdom? The tipline is open. 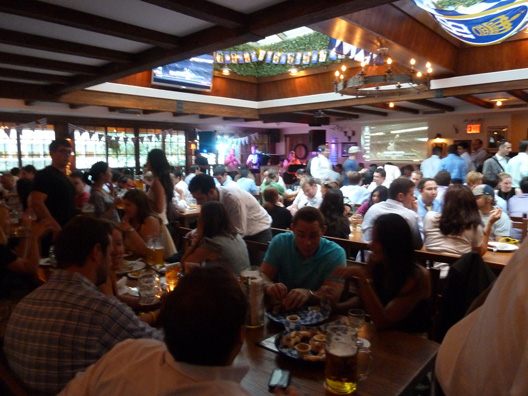 It's a place where you can't even figure out what you're supposed to do to get in. Downstairs, there's a guy at the door that looks like a thug in one of the crime families, you work your way up a stairway to find a room so noisy you can't even think. It's an instant migraine headache. You have no idea how you're supposed to sit down at all of the tables, which are already thronged with people. There's no greeter there to tell you what to do or explain, but basically you have to arrange for your own seating accommodations by telling people seated already, who happen to make one thousand times more than you, to get out of the way so you can sit down.

[Hofbrau on a typical weekday at 6 PM]

Then of course, there's the food. The beer is real beer and there are only a few choices and it comes in big, big mugs. But the food is such a disappointment. It's been refashioned for the American audience, whereas you would be happy with standard German food. They have a lot of hamburgers and fries thrown in, and none of it is any good. Plus you cannot hear anything for three or four days after you leave.

You measured the noise with a decibel reader right? It never went below 140 decibels. In other words it's louder than a rock club when the people are cheering. I've been told again and again that restaurants want to be as noisy as possible because people want to spend more money, but the real reason is they don't want anyone older than 25 or 30 there. They only want young people who can shout loud enough and still have hearing left to distinguish their friends' words. I say learn to lipread in most of these restaurants or you'll never be able to eat there.

To me the erosion of "comfortability," as they used to say in the motel industry, is one of the biggest stories about restaurants now. You go into a fancy restaurant and they're serving pizza and burgers and acting like you should pay like it's haute cuisine.

It's kind of what Alan Richman was getting at with his M. Wells piece. ...Most of my shitshows this year have to do with service. I've encountered worse service snafus this year than I ever have before. Which is funny because your specialty is cheap ethnic/outer borough restaurants. And man the service is always excellent compared to what I get in places that insist you spend $50 - 75. So many things they do are anti-diner. These ridiculous wine lists where the entrees may be $15 - 20 and the cheapest bottle is $50 and to get something you can even drink is $75 - 80. Shall I tell you me best shitshow snafu? Of course.

My best shitshow snafu was at a place called Qi, which is Pichet Ong's Thai restaurant. It's anonymously located right next to the Port Authority, so I don't know if he is trying to get people stumbling out of the buses from Trenton or whether he's trying to intercept people on the way to the theater or if this space was just available. The food tends to be quite good. The guy is a competent chef, but when it comes to managing waitstaffs or even setting them up, that's the part that's gone by the wayside.

I sat at a table with some friends, and they loved the food, but we noticed there were no table busers. So over the period of an hour, the runners brought three courses and literally put the new plates on top of the dirty plates. On top of the dirty plates! This seems to go contrary not only to the principles of service but just to human common sense. Yet a similar but much less serious thing happened to me here at Birerria. The last time I was here they rushed us by bringing the entrees before we finished even a half of the appetizers.

It's this new mentality on the part of restaurateurs that they want to control everything. They want the waitstaff to be in charge not you. It's like that wheedling comment at the end of the meal: "Do you need change?" Motherfucker bring me the change. I don't need it, but as a matter of closure I would like to see the change and then adjust it how I see fit.
· All Shitshow Week 2011 Coverage [~ENY~]