Share All sharing options for: Co-Op Food and Drink

All week, we're featuring Shitshow Week Reviews—assessments of a restaurant that at first glance seemed totally and completely off the rails. 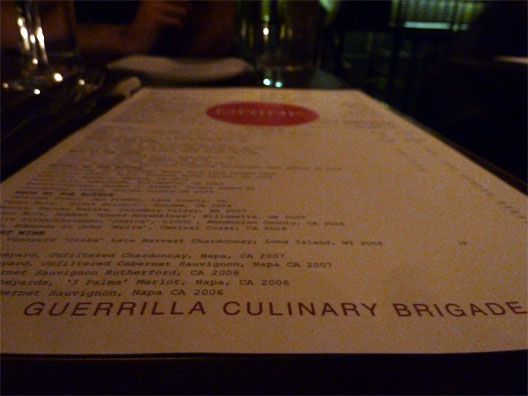 1) Thor, as overseen by chef Kurt Gutenbrunner, who left in 2006 to "concentrate on his restaurants that better reflect his Austrian roots."
2) Thor, as overseen by a gaggle of various chefs, including Jesi Solomon, Mark Spangenthal, and Kevin Pomplun, enjoying moments such as this one: "Random Saturday night text message received at Eater HQ: '10:14 PM and dining room at Thor is totally empty.'"
3) The hotel shut the whole thing down in summer 2007 and gutted the place, adding pull-back floor-to-ceiling windows and handing control of the joint over to nightclub maven Matt Levine. Levine dubbed the place Levant East, a spot which drew the 2009 interest of Shitshow Week.
4) In the spring of this year, the room was once again made over, this time with portraits of LES locals lining the walls, and the new shebang was dubbed Co-Op Food and Drink.

It was this, the most recent incarnation of what can be said without doubt to be one of the worst restaurant spaces in the city, that we visited on a recent Tuesday evening to discern its current state of Shitshow-ness.

Sometimes, one has premonitions—vibrations, if you will, that alert us to what we're about to experience. In this case, before we even made it through the door, we received such a vibration, courtesy of an iPhone. 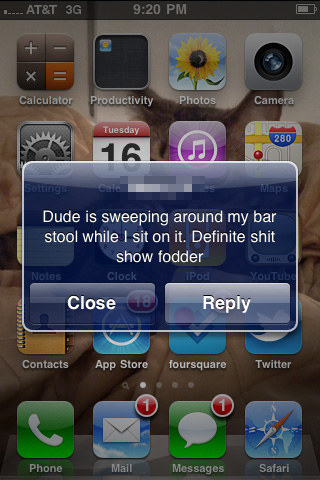 Arriving at the bar, we checked in early for our reservation, and informed the two women manning the maitre'd's stand that we'd be a party of four, not two. They took it totally in stride and asked us to join our friend at the empty bar, where the sweeping had ceased. It should be noted that the front lounge was as empty as the bar—but that, peering back into the dark recesses of the restaurant (the windows in the back room that had once lent an air of tenement chic to the proceedings having long since been eliminated), the dining room appeared, well, packed.

I ordered the special Truffle Martini, a drink described as "Double Cross Vodka w/ Black Truffle & Feta Stuffed Olives." It is not a drink you should order, and that's not just because it doesn't taste truffled. It tastes of something gone very wrong, perhaps an implement not cleaned, perhaps someone trying a poor practical joke.

While waiting at the bar, I was brought to mind of someone who had it even sadder than we did. I'm speaking of Yelper Kelly K., who dropped by Co-Op last week for dinner only to find a Yelp Elite event going on. Of course there was a Yelp Elite event going on. But what makes Kelly K.'s case so sad is that she is, in fact, Yelp Elite herself, and yet did not get to participate in the fun. She recaps, "I actually came here the same night as a Yelp event. They seated us at the sushi bar and the service was definitely lacking since they were swamped.  A sympathetic waiter grabbed our bottle of wine, and things looked promising? We ordered a few rolls that were inadvertently delivered to the guys sitting next to us.  They didn't realize it until they had started eating them.  Before we could complain, one of the guys seated next to us got up and walked into the kitchen.  Huh? Turns out he was the owner."

That old Yelper spirit proved indefatigable, though. As Kelly K. puts it, to close out the same review excerpted above: "I will definitely be back the next time I'm in NYC!"

As were we. Two members of our group recollected previous meals eaten in previous incarnations of the space. "I had oysters and caviar and it was quite good," said one. "There was a dessert called the LES breakfast that had a cookie shaped like a straw," said another. "I brought my mom back here."

Misty water-colored snapshots of random Lower East Siders. Not viewable from the table we'd just been seated at, because we'd been situated at the worst four-top in the place, outside of the airy back room and directly across from the kitchen.

Anytime the menu's offering mini-ceviche tacos and lobster shots, that's how we're starting our meal. The tacos earned this praise: "That's what I'd expect from a high-end TGI Friday's." The lobster shot? Not bad, for a lobster shot. For mains, we ordered in two batches: appetizers and sushi. For apps, meatballs, tacos, pork buns, and risotto. And the Lower East Sliders. For sushi, the signature tuna with gold leaf. The signature Co-Op roll. 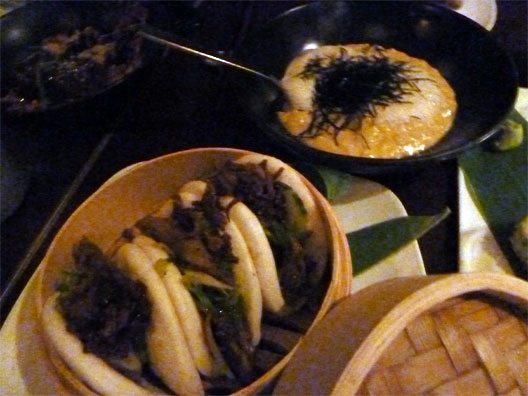 Mixing things up, or mixed up, our waiter brought out the sushi first. Mediocre to some, kind of disgusting to me, but not inedible. The mains, or rather the apps, provoked more debate. Who doesn't love risotto with the consistency of mac and cheese? The meatballs, something many an airport would be proud to serve. But the service throughout was prompt and pleasant, and our waiter, Iman, even gamely debated the merits of the tacos versus the meatballs with one of our table members. A shitshow, alas, this was not. 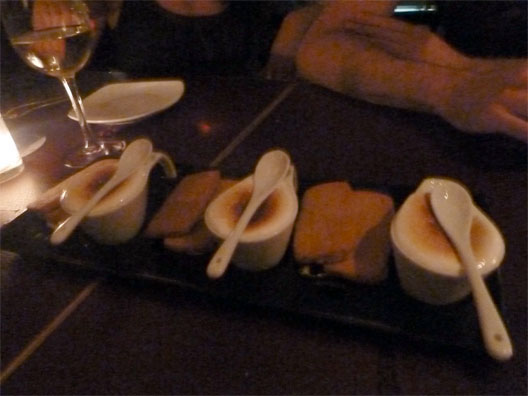 But man, a pretty nasty restaurant? This certainly is. That was proven by the closing coup de grace, "deconstructed s'mores." So deconstructed, in fact, that no part of the dessert was warm, despite the blow-torch char on top.

It was ever thus at The Hotel on Rivington — that striving, that reaching, that yearning for something more that still isn't quite there. Now truffle up those s'mores, and we'd have been talking.
· All Shitshow Week 2011 Content [~ENY~]