Jeffrey Tascarella on his Teen Years at a Shitshow

Share All sharing options for: Jeffrey Tascarella on his Teen Years at a Shitshow

Throughout the week, restaurant industry pros will submit their stories of working at a shitshow, continuing today with Tenpenny's Jeffrey Tascarella. Want to submit your own story of working on the front lines of shitshowdom? The tipline is open and anonymity is available to those who so desire it. 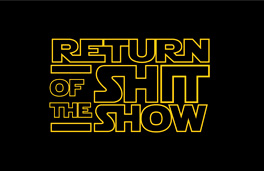 I was eighteen years old. It had been about two years since I last picked up a tray, took an entree order, or smelled the hot funk of the dishwashing station--but The Business sucked me back in.

I dreaded the idea of returning; the polishing of silverware and endless folding of napkins; the scorching hot plates and the heavy trays; the nervous energy of the dining room, the kinetic rattle of the kitchen; wearing a goddamn apron--all of it. But, I couldn't think of another place to go, and here, I had unknowingly gotten a job at a complete and utter Shitshow.

This one was different type of Shitshow--the guests had a somewhat decent time. It was pretty busy, we made good money. If you got past the dingy floral carpet and stale smoke-bingo hall smell, it was a fairly cute little restaurant in the middle of nowhere. You see, this Shitshow revealed itself to me in layers, over time. Some Shitshows are like an onion. A rotten, disgusting onion.

I heard they were hiring, and lined up a job interview with the chef:

"How many plates can you carry?"

"With food on them?"

A husband and wife owned the place; they had once, years ago, been the flirting bartender and waitress there; he snuck her vodka-tonics and she brought him steak and cocaine. They somehow purchased the place from the retiring former owners, and (I’m guessing) randomly drew their roles out of a hat: the husband, (let’s call him Chef) would run the back of the house, and his wife, Jane, would run the front of the house. They really had no business attempting either of these jobs. I know this now.

They served basically Italian-American classics; manicotti and shit like that. The menu had an entire “Parmesan-Style” section, where we slathered tomato sauce and melted cheese on chicken, veal, shrimp, flounder, and god knows what else. For some reason, we served sauerbraten and red cabbage, too. It was bizarrely out of place, but pretty tasty.

They were especially proud of their meat sauce; we were instructed to tell our guests: “It’s Better Than Carmine’s!” At the time, I imagined this to be something I could brag about. Family meal was penne with tomato sauce, seven nights a week.

The brunches were busy with baby showers and old lady birthday parties; a sizeable majority would wash down the blood of Christ with terribly made Old Fashioneds.

One old lady had too much of her medication and too many whiskey sours, and collapsed in the vestibule of the restaurant during brunch. She died on the way to the hospital. Chef got us open again in time for dinner service. Guests who dined with us that evening must have found the staff a bit distant and macabre, as we were all working doubles that day.

The weeknights were populated with angry families committing their required once-a-year dinner outing for mom's birthday; young couples on awkward first dates; and local bank tellers, frumpy teachers, or lonely divorcees letting loose, taking off their brooches and putting down some white zinfandel.

Every Wednesday, we would take a ride in the Chef’s pick-up truck to the restaurant supply store about 20 miles away. We would load up the back of it with everything we needed: toilet paper, chicken fingers, canned tomato sauce, bags of ‘mesclun mix’. All food came from the restaurant supply store and most of it was shit: fish, meat, everything. I don’t remember ever seeing a delivery. I may be wrong.

We were unable to forge something as simple as a vinaigrette--we bought it. Why? Why? Why!?

We would sit in the bar for our little pre-shift meeting. The Chef would make up the daily specials on the spot (based on what was going bad in the walk-in fridge). We were pretty much the opposite of a seasonally, market-driven restaurant. Our menu was decay-driven.

Tonight, we have, uh, Shrimp, uh--what’s your last name, again?" he asked me.

"Shrimp Tascarella," he told us.

"No, it doesn’t have a fucking sauce on it!"

How dare you doubt this beacon through which Escoffier speaks to us?

His temper was short, like you might imagine a burly, old-school chef’s temper to be, except he couldn’t really cook--which pissed him off. It was a vicious cycle.

Pre-shift usually concluded with him berating us for no reason, because they couldn’t/didn’t talk to us about wine, or food, or service, or any of those things. Rules regarding facial hair were arbitrary; some days it was fine to have some stubble, other days you would get sent home for looking sloppy. He would pick fights with the girls until they cried, then, feeling guilty, would leave the restaurant to buy them clothes as a gift. Strange!

Afterwards, we would sit outside, in the small fenced-in dumpster area, smoking cigarettes and folding napkins into the ‘sunrise’ fold and layering them in a bin until the busgirl would alert us that our section was sat.

There was no rhyme or reason to the reservation notebook or the server’s stations. Some nights, you waited, smoking, until 9 PM. If it was slow and you asked the Chef to go home, you immediately became the closing server—so you kept quiet. Other nights, you had an eight-table section, simultaneously (“Octuple Sat!”), while the other servers sat outside. This wasn’t a pooled-house, and no one cared for the guests’ experience, so you would literally have to offer to split tips on a table if you needed help.

We had no food runners or things like that, so we constantly had to come into the kitchen to see if our food was ready.

Most of your night was spent peeking in the kitchen, and having the Chef scream, “DON’T GO ANYWHERE YOUR TABLE’S ALMOST FUCKING UP”—and you would wait a good five to seven minutes while that final dish they were dragging got its parmesan browned in the salamander. Also, since there was no real expeditor or organization of any kind, you had to fight off other servers grabbing elements for their table that were actually coming up for yours. Nightmare.

Your section was getting angrier and angrier out on the floor. None of them had seen a member of the service staff in a long, long time, because we were all in the kitchen dealing with this shit:

We also worked the garde-marger, which meant you had to prepare the house salad that every guest received as a first course: handful of bagged, mixed greens; one slice of cucumber, one slice of tomato, one tablespoon of black olives, one ramekin’s worth of croutons, and guests’ choice: raspberry, italian, creamy italian, blue cheese, french, or thousand island, all which came from big gloppy jars sitting in ice. Making salads for a full section would put you in the weeds, bad, so we would pre-make salads and put them in a baker’s rack in the walk-in; they you slopped dressing on them and ran them out.

Again, there was no support staff, so we had to do bread service too—which meant cutting up a large sesame seed loaf, and using a paint brush to apply this neon-orange garlic butter concoction to it. You then had to beg the broiler cook to take your bread and brown it for you; but he would always burn it because he was high as shit. If you were in the weeds, you didn’t care—the burnt bread was going out to the table.

We kept trays on stands pretty much all around the dining room, and just piled all of our dirty plates and glassware on them. No server wanted to carry the bustray, like college roommates playing that endurance match seeing who will finally break and wash the dishes.

Getting drinks from the service bar was near impossible; the bar was full of the owners’ friends who drank and ate for free nightly. The bartender was Jane’s dad; he was old, he was pissed off, he didn’t know how to make drinks, and he was only there to drink for free himself. If you interrupted him from downing Chivas, god help you.

If guests made any sort of special request, it was a nightmare.

"Chef, table 30 wanted a bit of extra tomato sauce on the side---please, can I have it?"

"DO I GO TO THE FUCKING GAS STATION AND SAY, ‘OOOO GIVE ME ANOTHER HALF-GALLON ON THE HOUSE?’ NO! CHARGE THEM FIVE DOLLARS!"

"Chef, they said their soup is a little cold on table 24."

"GIVE ME THE GODDAMN SOUP!” He would proceed to cook it until it was a full, rolling boil. “SEE IF THIS IS FUCKING HOT ENOUGH FOR THEM!"

"Chef, the man on table 20 says his steak is too rare, can I get a little more fire on it?"

"GIVE ME THE GODDAMN STEAK!” He would press it on the griddle with a pan until it was a smoldering, black hunk of shit. “SEE IF THIS IS WELL-DONE ENOUGH FOR THEM!"

Since, again, the reservation book had no form of planning whatsoever, the restaurant could get terribly slammed. Chef would scream from behind the line at me, “Get my WHORE WIFE IN HERE RIGHT FUCKING NOW!” and for emphasis throw a plate at me. (This happened many times to myself and others; we found it more funny than abusive at the time.)

"Jane, you have to come into the kitchen," I’d say, prying her away from her friends at the bar.

"What’s that cocksucker’s problem, now?" she would ask, stamping out her Merit Menthol Ultra-Light 100 into an ashtray.

I walked her into the kitchen and into his psychotic ranting:

"NOT ANOTHER FUCKING TABLE! TURN THEM ALL AWAY! I’M NOT COOKING ANOTHER GODDAMN PLATE OF FOOD! TELL THEM TO GO THE FUCK HOME! IT’S OVER! IT’S OVER!" He would literally take off his apron, throw it to the floor, get in his truck, and drive away, tires squealing.

And with that, the night would be over.

We would cash out for our tips at the bar, and then promptly sit down and drain the restaurant’s profits--you could party into the wee hours of the night there, as long as you took off your apron and tie. We would do shots of SoCo and lime (it was 1999 on Long Island, shut the hell up) and imitate the chef’s best lines of the evening, plunking quarters into our jukebox.