Just in time for Shitshow Week comes the news that the New York debut of Diner en Blanc, a Parisian pop-up dinner where everyone brings their own food, wine, and tableware to a secret but majestic location and dresses all in white, is heading indubitably off the rails. Per an Eater reader over the weekend:

Awoke this morning to a posting by Diner en Blanc organizers on Facebook apologizing that they failed to program the registration process to 10,000 registrants. As a result, 31,000 people registered and paid for the event (Ed: 31,000 registered but only 1,800 paid), but those who had not received a confirmation would be turned away and their payment refunded.

The Wall Street Journal reports today that the organizers actually charged 1,800 people the $50 ticket fee when there is space for just 200. In a message posted to their Facebook page—where hundreds of angry would-be attendees expressed their outrage over the weekend—organizers apologized for the mixup and promised that anyone who registered but did not receive an official confirmation would get their money back today, adding, "Our intent all along has been to make the evening a joyful and special experience and what has happened is just terrible!"

The New York Diner et Blanc picnic will still take place, as planned, on August 25 at a yet to be announced location. And on a positive note, the organizers sent out a notice last week, see below, saying they would, out of respect to NYC's new same-sex marriage law, allow same sex seating. 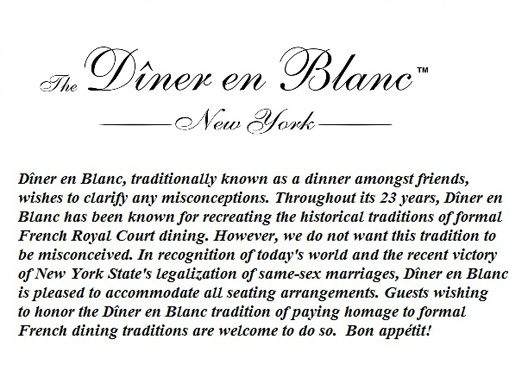