Brunch at Neely's; Rumors of a Speakeasy at The Dutch

Share All sharing options for: Brunch at Neely's; Rumors of a Speakeasy at The Dutch

We're taking off a bit early to enjoy this summer Friday, but we'll be back for Eater Weekend tomorrow morning. 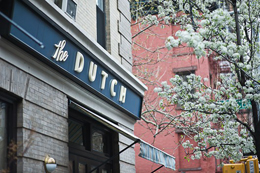 EAST VILLAGE — Apiary is celebrating their third anniversary next week by offering each dinner guest a $20 gift certificate for a future meal. The deal is available August 14 - 21. [EaterWire]

SOHO — Grub Street hears a juicy rumor that The Dutch might open a speakeasy-style bar in a downstairs space that is currently used as a private dining room. [Grub Street]

VIDEO INTERLUDE — The Feast has a video of Philadelphia chef Marc Vetri playing guitar and generally rocking out, in a kind of bluesy-folksy coffeeshop way. It's a preview for a series of pop-ups Vetri will be doing in New York later this year which will feature "a music component." [The Feast]

UPPER EAST SIDE — Ryan Sutton calls BAD DEAL on a Gilt City offer for 50% off Serendipity's $1,000 caviar-topped ice cream sundae. Here's one of the reasons why: "Gilt City is recommending that diners tip on the original price of $1,000. It’s only fair, right? Wouldn’t want to stiff a waiter by ONLY tipping $100 on an ICE CREAM SUNDAE. Better give him the full $200 bucks to be on the safe side of this custard-based transaction. " [The Bad Deal]