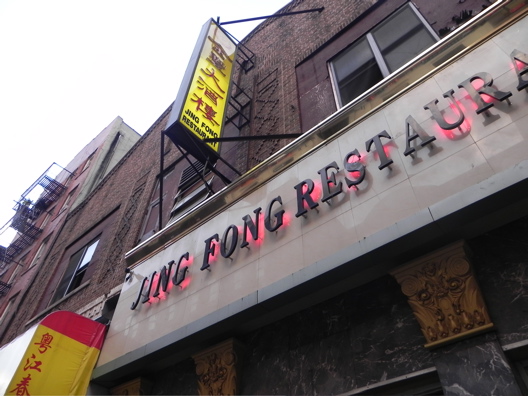 It is without question that Michael Anthony is a busy man. He was recently named chef-partner at Gramercy Tavern and has also been working on a Gramercy Tavern cookbook, but when he can get down to Chinatown, he obsesses over Jing Fong's dim sum.

"In terms of off the beaten path, Jing Fong is a great find. I used to go to Chinatown twice a week to shop for ingredients for March restaurant, and that was when I discovered Jing Fong. It’s a huge Dim Sum palace on the second floor of a building on Elizabeth Street. I thought the location was intriguing- very few well known New York City restaurants are not at street level. You approach the restaurant with a long escalator ride to the second floor, then step into a large ballroom complete with a huge dragon head.

Carts full of food pass by. You could show up and not be that hungry, but so many things pass you by that it’s impossible to resist trying them. You watch the server mark your order on his pad in Chinese characters, and you have no idea what it says, or what you’ll be charged, but you continue to select food from the passing carts and delight in the offerings. I love the clams with black bean sauce, the pan fried chive dumplings and the crispy stuffed bean curd. It’s a wonderful New York City tradition, and a fantastic somewhat hidden gem."
· Jing Fong [Official Site]
· All Editions of Dining Confidential [~ENY~]