Thomas Kelly and David Schillace on One Year of Mexicue

Share All sharing options for: Thomas Kelly and David Schillace on One Year of Mexicue 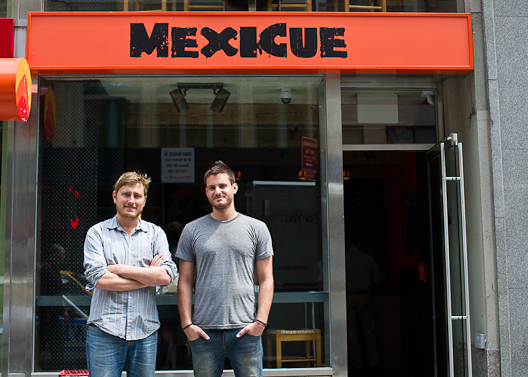 David Schillace and Thomas Kelly both left corporate jobs to start their food truck, Mexicue. After a few months on the road, it proved popular enough to spawn a brick and mortar restaurant, and there's at least one more on the way. We recently chatted with David and Thomas about the first year of Mexicue and the road ahead.

David Schillace, Co-founder & CEO: I was at a corporate sales job, and I kind of had enough of it. Thomas and I were friends, and I knew he was a phenomenal cook, so I sat down with him and said, "Listen, I really want to start a food truck." I was out in LA and I saw the Kogi truck out there, and I thought it was terrific. It was a very cool scene — it was something that seemed very physical and very fun, and there was nothing really like that in Manhattan. So, I wanted to strive to kind of figure out how to do that in New York.

Thomas Kelly, Founder Co-founder/Director of Culinary Development: I was working primarily in marketing. Once I moved to New York, I started working in online marketing and then I did extensive pastry internships, and I was trying to determine if I wanted to dive into that world. I had always known that I loved food and I loved cooking, but I was unsure of what capacity I wanted to do that in my life. So, when Dave came to me with this idea for this truck, it just kind of clicked for me as just a great business model for us, and also just sort of a better lifestyle choice for myself — to get into food, but not be in this fine-dining world.

Was it hard to find a truck? DS: It was very difficult finding a truck. You're trying to look for these old remodeled UPS and DHL trucks. We ended up finding one on eBay, and we went up to Woodstock to take a look at it, and it was semi built-out, but obviously we needed to refit it to the needs of what our concept was. So, we spent the next three or four months building it out in Long Island City.

Did you do any recipe testing or research on either Mexican or barbecue foods? TK: When I cook at home I do stupid things that often times work out really well, and often times fall on their face. But, this was one of those things that I was doing over and over again, and I had some success. Dave's original concept was actually tamales. DS: Yeah, there's this underground market for tamales, and we just expanded that to what Thomas was comfortable with, and what he knows.

Do you have a commissary space? TK: Yeah, we have a commercial kitchen space we use for a lot of the smokes and the braises and things like that. It's on the Lower East Side.

How did the opening go? DS: Our first day was in Park Slope, and then we got a little bit cocky and took it to 52nd and Park the next day. Just to paint the picture, I think the line was three city blocks long. So, we went from a few people stopping by and complimenting the truck in Park Slope to, you know, what we were actually going to be doing. We went through people quickly. It was tough, we made a lot of mistakes in the beginning, but we learned from them and we adjusted.

After that initial mob scene, what did you change? DS: At that point we knew that we had interest, and then it was a matter of figuring out the operational details. It wasn't, "Where should we put the truck?" It was, "How can we keep enough food on the truck?" From that point on we started producing more food, and working with our team on how to get people in and out quicker.

Did the actual product change very much over the last year? TK: Not a whole lot. We've been tweaking it since the beginning, and we will continue to tweak, but you know the core product is pretty much the same. We did kind of work on the menu when we opened the brick and mortar restaurant. We expanded into a couple of new items, and we took our core six tacos and sliders and took a look at what minor adjustments we could make to make them taste better.

Let's talk about the brick and mortar. How did you pick this space? TK: The Midtown crowd has always been very receptive to our food, and we've got a good active conversation with that community. So, this location seemed like sort of an obvious first step for a brick and mortar restaurant. It took about three months to build out.