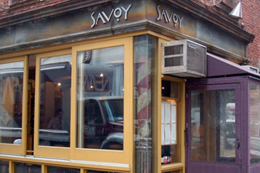 There were several interesting items on last nights Community Board 2 docket, even in these dog days of August. Here are the highlights of what went down:

Peter Hoffman, the owner of recently shuttered Savoy, was present at last night's meeting, seeking a liquor license for his new restaurant at 70 Prince Street. As mentioned in previous reports, this spot will be more reminiscent of Back Forty - his partner at Back Forty will also be involved here. And good news: they'll be open for brunch! Hoffman was given easy approval. No word on what the name will be.

Empanada Mama's new location at 513 6th Avenue was back after a month of collecting signatures and attempting to reach out to block associations and community groups. Empanada Mama is looking to open a 24-hour operation, serving liquor until 4AM every night of the week in a previously unlicensed address... ballsy!

Despite the new signatures and a nod of approval (but no written proof) from Gary Tomei of the 13th Street Block Association (yes—that's Marisa's father), the board simply could not look past the 4AM booze service. More proof of the drying of NYC. They asked the owner if he would consider putting the lid on liquor at 2AM on weekends, and 12 or 1 on weekdays, but he did not want to budge. The board unanimously denied the license, claiming going from no previous license to a 4AM full liquor license was like going from 0 to 100 MPH, and it was simply too much. Some members of the board also thought he was lying about his outreach to the community for some reason.

City Tavern operators—if you're reading this, call your Community Board! The board was very upset that they had not shown up to SLA Licensing Meetings four times in a row, and due to the no show they were denied their alteration application.

One board member referred to Travertine as his Miss Lily's. A lawyer (but no principles) was present to attempt to renew Travertine's license, however due to too many changes in their Method of Operation they never told the Community Board about they were unanimously denied.

In other news, Umberto's Clam House is getting a new bar!
· All Coverage of Community Boards [~ENY~]