A Review of CrossBar by Awesome Dave, The Dude Blogger

Two weeks ago, we ran a review of ABC Kitchen by Francis the Flowery Food Critic, and today, we have another review from one of her contemporaries: Awesome Dave, The Dude Blogger. He recently left a career in finance to focus on his writing, and he's currently looking for work at an urban lifestyle site. Here's his review of Todd English's newest, CrossBar: 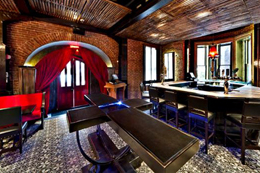 Maybe it's wrong to indulge in so much sin, inside a church. Or maybe that's just what the good lord wanted us to do.

CrossBar is the new restaurant in The Limelight Marketplace, which was once home to nuns, priests, pews, organs — you know the story. Now it's a cathedral of cocktails, a pagoda of pig, a steeple of style, an altar to awesome, from the patron saint of pork, Todd English.

Todd's a cool cat. If he had been born 40 years earlier, Frankie, Dino, and Sammy might have made him an honorary member of The Rat Pack, or at least hired him as a cook on their private jet so they could enjoy his crispy buffalo sweetbreads and creamy lobster guacamole on the way to Vegas, baby, Vegas.

At CrossBar, Todd is focusing on a new kind of dining we like to call farm-to-lounge. Yes, the kitchen uses the best organic meats. But the servers won't lecture you about where those moo-cows came from. Relaxation is the motivation, and libations are the stations of The Crossbar. So cool your heels, sip a Peaches N'Beam cocktail, check out the menu — and maybe that brunette at the bar, the one in the pencil skirt. Oh, the possibilities?.

The space is full of wood salvaged from old schools, barns, and churches (and probably a few F-shacks) from upstate New York. We're talking oak, pine, teak, and you know there's some mahogany up in there. On the floor, there's an undulating pattern of intricate, precise, and pristine white asterisks, offset by teal fleur de lis. There's a Noguchi-esque table shaped like a crucifix, glowing red Aldehyde-tanned leather banquettes, and armless Marcel Breuer-style chairs, the color of deepest, darkest night. It all comes together like some sort of swinging wizard's bachelor pad. We're talking Gandalf, the grooviest magician in all The Shire.

The night we went, Danny the Doctor dug the puffed pig ears with insanely smokey paprika and black lime. Larry the Lawyer loved the duck sliders with bacon, crispy shallots, and oh yeah, foie effing gras. And Barry, the Bear Stearns exec, was blissing out on the room, the food, and the cocktails. "I don't want to leave this place," he said. "No really guys, they're going to eat me alive in prison. I'm soft, so very f***king soft."

Speaking of soft, start off your meal with the tuna carpaccio. Todd scoured the depths of the briny deep to bring you this unbelievably fresh fish, paired with brioche croutons straight out of the Champs de Elysee, and a Caesar dressing that will make you long for the days of chariots, sandals and gladiators. 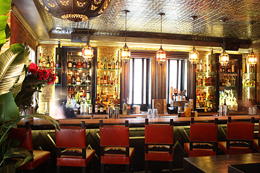 Move on to a plate of Lil' Tacos, which are like a cruise down old Mexico way. You remember that one spring break, right? The one you swore you'd never tell your wife about? After a few of these tortilla-wrapped masterpieces, you'll achieve the same level of south-of-the-border splendor you experienced on that fateful trip. What happens in Cabo?

Then, jet-set over to Deutschland, for some of TE's signature pork schnitzel with citrusy market-fresh lemon, delicate bright green garden parsley, and a tangy, pulverized yellow mustard slaw. This is an example of Todd's Kraftwerk, at its finest. Then say auf wiedersehen to your entrees, and hello to dessert.

Larry the Lawyer ended his meal with a different kind of sweet treat: a cold plymouth gin Purple Rain cocktail with that brunette in the pencil skirt at the bar. And you know he got those digits. Funny story: he found out three weeks later that she gave him the number for 1-800 Flowers. Well, you win some, you lose some. And you only live twice. Remember: life is like a box of chocolates, and all the men and women merely players.

And you'll feel like a player at CrossBar. So cancel dinner with the in-laws, text the dudes, drop the ladies off at lamaze class, and head to The Limelight — boys' night out never tasted so good. And that brunette in the pencil skirt at the bar ?