Alex Rein on the Success of Kelvin Natural Slush Co.

Share All sharing options for: Alex Rein on the Success of Kelvin Natural Slush Co. 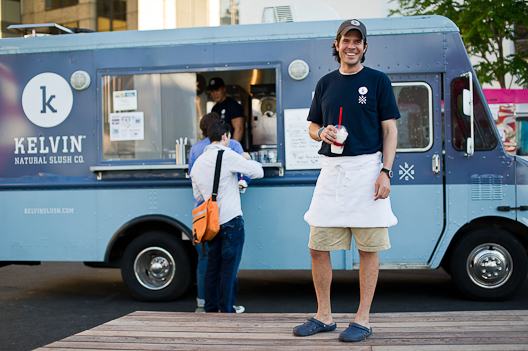 Alex Rein got laid off from his job at a big Midtown firm in the summer of 2009. Instead of continuing to practice law, he decided to start a business he'd been dreaming about for a few years: a drink stand serving an artisanal version of the sugary Slurpees he loved as a kid. This plan eventually morphed into Kelvin Natural Slush Co., a handsome food truck that serves three varieties of blended ice beverages with about a dozen "mix-ins." Lines started to form shortly after they hit the streets last July, and in October they received a coveted Vendy Award for Best Dessert. Now Alex is gearing up for the debut of a spin-off cart in the West Village. Here's the story of how it all came together.

When did you first get the idea for this project? Alex Rein, owner: I grew up drinking Slurpees, Icees, and those sorts of drinks, but when you get to a certain point in your life you stop drinking them. They're aimed at a younger audience and they're loaded with sugar and artificial flavors and colors, and will turn your tongue purple. But ultimately they're still really good — they're really refreshing on a hot day, they're non-dairy, and they're not really heavy. So, the idea came that it would be nice to offer a more grown-up version that my contemporaries could enjoy.

How did you get the ball rolling? You know, it was something I was kicking around for a while, probably two years before I left the firm. Not super-seriously pressing it, but kind of in the back of my head. I attempted to brew up some of the ginger in my kitchen, and it did not go so well. Did you use a recipe? No. And I am not really a cook or anything like that, so it was really just going to the corner store, buying a bunch of ginger root, boiling it, putting it in ice cube trays, and blending it. That was the start. So, I was kind of kicking it around for a while, and then I got laid off in the summer of 2009. It was one of those things where the economy was tanking and it was understandable. Our practice, our group was very slow. It seemed like that was coming, not for me necessarily, but it seemed like things were slowing down. But again, I kind of took that as an opportunity to really pursue this. It was scary enough to go forward and do this, and the thought of leaving the comfortable job and the salary was very scary. So that was what kind of happened. I started working on it seriously in the fall of 2009, and we opened in July.

Did you ever entertain thoughts of doing this as a brick and mortar? Yeah, actually that's how this idea started. I wanted to do something like a small-footprint store, probably not as big as a Pinkberry. Like a Tasti D-Lite, 600 square feet. And I looked into certain retail spaces, but it was expensive. Even the small ones are expensive when you consider the build-out, the insurance, and everything. For a seasonal product that had never been tested, that was very, very scary. So that was kind of how it evolved into a truck, and at the time trucks were starting to become popular, and so we at least decided to test it out.

Where did you get the truck? A friend of mine actually knows someone out in Brooklyn who makes custom steel refrigerators and kitchens, so he put me in touch with them and they work on food trucks. They used to build them, and they put us in touch with someone who still does construction. And then he knows people who deal with used trucks, so we bought a used truck, completely gutted it, and then everything inside was custom built for us.

How did you develop the recipes? We started by trying to brew it up ourselves, and that failed. On a larger scale, you need to have professionals, so we hired a beverage development company who I worked with. We did a lot of sampling. So, we bought up a bunch of iced teas, lemonades, citrus drinks, ginger beers, and ginger ales, and we went through a lot of those and I said what I liked and what I didn't. Finally, after several iterations, we came up with recipes that I'm very, very happy with.

Were there any delays? Construction took a while, and everyone says that. But when you deal with contractors and builders, and you're going through July, and the sun is shining, and it's 90 degrees, and you're itching to get out on the street and test your idea and your product, it's kind of tough. So the truck took a lot longer to build than we would have liked. It was frustrating, but it was kind of a lot of learning as we were going. There were no major pitfalls or disastrous delays, it was just that everything took longer than we expected.

Where did you go on your first day? I didn't really know parking very well, but I think our first full day was in the Meatpacking District, on Gansevoort. Not on the most heavily trafficked street, but it was behind the Gansevoort Hotel. It was good — people that were passing by liked it, and we were encouraged because people did stop and try it.

When did the lines develop? People started lining up during the first few weeks of August. Again, we weren't really well known, it was more just kind of passing by looking and seeing it and grabbing attention. But when we really thought we had something was at the Vendy Awards last year. We won the Best Dessert Truck Vendy. We were thrilled just to even be nominated. There were so many other great food trucks there. We had 90 people waiting in line at one point — it was just shocking. The line was 45 minutes long or whatever, and people were waiting. The weather helped again, it was a very warm day, but it was really exciting.

Was staffing difficult? Staffing food trucks is a challenge. Every employee needs to have a license, and the licensing process takes a while. We tried interviewing people, but with the delays we weren't sure when we were going to open, so last summer I was in the truck every day. Every day that it was open, I drove it into the city and I drove it back out. It was a lot of long hours, and that doesn't count the prep in the morning and the cleaning at night, so it was long days. Where does it sleep at night? In Long Island City. I mean the hours were killer — 16 hour days, if not longer. But it was exciting. I certainly wasn't complaining about it, to be out and busy and see people getting it. It's your own business so you want to see it succeed obviously, so the hours don't really bother you and you're happy to do it. But yeah, it was exhausting to say the least. But I love interacting, and I still work in the truck every day.

Did any of your old law cronies check it out? Yeah, I've had some former colleagues come by, and some were surprised that this is what I'm doing now. I still get e-mails of support from them. Actually, the head of my firm came by one day and I wasn't in the truck, but I would have loved to have been there.

When did the season end? We were out through October, and then it was just sort of at a point where people stopped buying them. We did an event in March, a fundraiser for Japan relief. We pretty much gave away slush, took donations, and gave it all to the Red Cross. But we opened for the season at the beginning of April, and we've been out and about ever since, praying for good weather.

Have you had to deal with any flack from police or other food trucks? We offer a different product than most, so we don't really see ourselves as being in competition with other food trucks. I understand to some degree with the ice cream trucks, and we try to be as respectful as possible to the other trucks. I wouldn't want someone taking a spot that I'd been going to for years and years, so I like to extend that same courtesy and respect to other truckers. With the police, we haven't really had any problems. I know that in Midtown some of the blocks where a lot of the food trucks congregate have become a little bit problematic, but we don't go to Midtown that much because we don't rely on that lunch rush.

What's next? We're actually really excited about this; we're working on building a cart for Little Red Square on Bleecker and Sixth Avenue. We're thrilled about that. We're in the process of construction, and hopefully we'll be up, well, I don't want to say the next few weeks, but sometime soon. It's under construction, and things are moving along, and we're thrilled to kind of get out and expand. There will be three machines in the new cart, like our set up in the truck. We're working on a few kind of cool things with the hybrid electrical system — it's going to be a diesel/electric hybrid, so it's going to run off of batteries, but then when the batteries run low, we'll have the generator kick on and charge the batteries, so it will be more efficient than the original truck.

What's one piece of advice you might offer someone that's starting a food truck? Think long and hard about it, and be prepared to work very long hours.

Does it feel like it's been a year? It feels like it's been an eternity. It's really shocking, truthfully — I'm still stunned by how far it's come in a year. I wouldn't have been able to predict how far it's evolved in even the most optimistic kind of way. Certainly the customer response has absolutely blown me away. It's been a good year.

· All Previous Editions of One Year In [~ENY~]