Josh Früm on the NYC History that Inspired Monument Lane

Share All sharing options for: Josh Früm on the NYC History that Inspired Monument Lane

Welcome to Explain Your Tchotchkes, a new feature where Eater asks restaurateurs about why they picked the decorations, knickknacks, and other notable design details in their dining rooms. Today: Josh Früm, the owner of new West Village American restaurant Monument Lane. 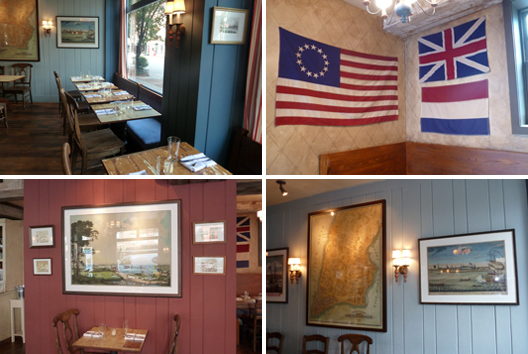 Restaurateur Josh Früm says he wasn't a history buff before opening his new West Village bistro Monument Lane. But as he began researching the space, he was drawn in by the story of how Greenwich Village has evolved over the last 300 years. That narrative became the inspiration for the dining room's design. Here's a tour.

Josh Früm, owner: "I just started doing a lot of research on Greenwich Village, that was all at the Jefferson Market Library. I got a lot of good resources there. It's a gorgeous place to study, and downstairs they've got a great collection on the Village, and I just went through a lot of their books just looking for inspiration. I came across an old map, and I saw the street name Monument Lane, which just kind of had a nice ring to it. I did a little more research and found out that after the Revolutionary War, that street became Greenwich Avenue, and I just kind of filled it in from there." 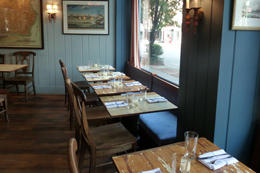 "These tables are from a house in Branchville, Connecticut that dates back to 1795, and it was in the same family from the 1880s to 2006, until this gentleman took it over. It had a bunch of Colonial doors that had been taken off and had been left in the basement or the attic, and he didn't have any use for them anymore. He said they dated back to the 19th Century, and he put them on Craigslist. It was such a lucky strike to find that." 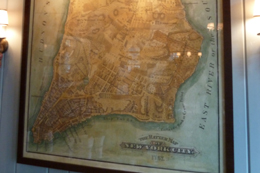 "So, seeing as how I got the name based on the map, I wanted to keep going back to it. This is a smaller version of the original map, which had a compass rose and a fleur-de-lis. And there are a lot of different compass roses and fleur-de-lis patterns in the restaurant — they're even in the logo. So we knew we wanted to recreate that map. We got a print from Columbia University that we blew up. The print was in sepia, so we had an artist watercolor it in, which is how it was actually done in those times."

"These are the Colonial flags, and the flags that became New York. It started out with the Dutch, and became the British. The thing about the Union Jack that I didn't know until I researched it, is that the Union Jack is actually three flags placed on top of each other. It's an English flag, just white with a red cross; it's a Scottish flag, which is blue with a white ex; and then the modern UK flag also incorporates the Cross of Saint Patrick, which is the Irish flag made up of a white background and a red ex. So if you look at the paintings from the 1700s, they don't have the Irish flag in it, because that was before Ireland became a part of the commonwealth. These were reproduced for us by an artist in Vermont." 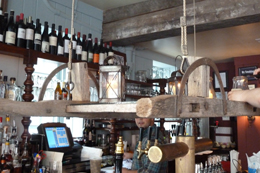 "The chandelier above the bar used to be a pig carrier from a meatpacking plant. The legs used to be another two feet high, so you'd throw a pig on there, and two guys would shuffle it around the room from one area to another." 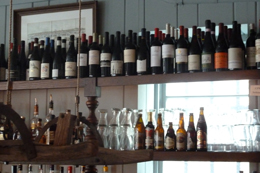 "All of the turn-wood pieces in the back bar are from couches and dressers — I think it's called 'bunting.' So the designer just chose a bunch of them and inverted them to match."