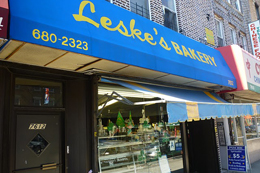 1) Bay Ridge: Lost City reports that iconic Scandinavian institution Leske's Bakery closed a couple of months ago due to rent issues. It was the last of its kind in the historically Scandinavian area. [LC]

2) Upper West Side: West Side Rag has some details on the sudden closure of respected Cuban restaurant Cafe Con Leche's 726 Amsterdam location. Competing stories here: the restaurant's answering machine says it's going to turn into a "French take-out" joint, but there's supposedly a sign outside advertising a future Kosher steak and sushi place. Regardless, they've still got one other location open, at 424 Amsterdam (between 80th and 81st). [WSR]

3) West Village: Zagat Buzz alerts us to papered up windows and unanswered phones at Italian-Venezuelan restaurant Pasita, strongly suggesting that it's done. [ZB]

4) Hell's Kitchen: Zagat also notices that West Side Sushi closed down, and there's already fresh plywood up at the location. [ZB]

6) Inwood: DNA Info brings word that Sazones, a Dominican restaurant on Broadway at 216th Street, closed after less than a year in business. A sign on the door says that a new place called La Ceniza will open in its place. [DNA Info]

· All Previous Editions of The Shutter [~ENY~]