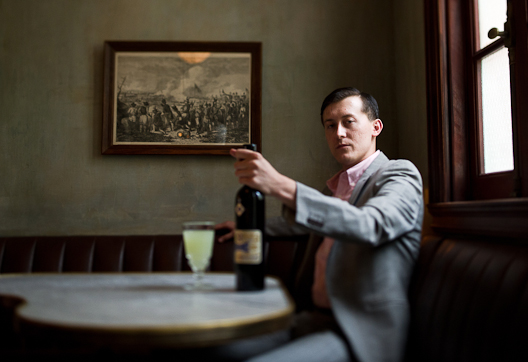 Since opening this past February, Williamsburg oyster house and cocktail den Maison Premiere has received a heap of praise from local and national media. It boasts what must be one of the most beautiful new restaurant spaces in New York, and the cocktails are not only expertly mixed, but reasonably priced. We recently chatted with head bartender Maxwell Britten about what it's like catching a drink there on an average night.

What's the busiest time of the week? Maxwell Britten, Head Bartender and Beverage Director: Happy hour is usually pretty wild. It gets really, really full. Monday through Saturday we're pretty much always busy, but there are usually some lulls between 8 and 10 PM. I think that's because we're the kind of place where people will come to have drinks and oysters before dinner or after dinner. It's a spot to start your night off or end your night.

What's the most popular drink? When we first opened we had eight cocktails, and now we have 26 cocktails, but we've always had this one cocktail called the St. Helena. It's basically a sugar cane rinse, with a sugar cube coated with Angostura bitters, two ounces of aquavit and a bunch of cracked ice, then Champagne poured over that with a little topper of Yellow Chartreuse. There's lemon oil sprayed over the top and wiped over the mouth of the glass. I think that has a real ceremonial look to it when it's being made, and that definitely catches a lot of peoples' eyes.

What are the chances of getting a buy-back at Maison Premiere? I don't know, I think our bartenders are...I mean definitely just come by, hang out with us, get to know us, and I'm sure we'll fix you up with something. But you don't have a "no buy-back" policy? No, definitely not, we're not that kind of place. We like to recognize our regulars, they're definitely our most important clientele. We definitely have a lot of returning customers week in and week out, people who live across the street, or in the same building, and we always want to recognize that.

Tell us about your favorite customers. Well, I'm only behind the bar two nights a week, but I have a couple of customers that come in at the end of my shift on Friday nights. We close at 4 AM, so it's a late night, and our shut-down is pretty crazy. So I have a couple of people that roll in for last call and just kind if keep me company while I shut down the bar. We exchange stories, talk about the night, stuff like that. There's definitely a lot of artists in the neighborhood and it's always great to see them.

Any celebs? Yeah, but it behooves me not to say who. But yeah, we've definitely had some interesting people come through here. In my mind, the greatest celebrities that come through our doors are people who are in the food and beverage industry. Not just New York City — we have people from San Francisco, Seattle, and London who come over and hang out. And to me, I consider those greater celebrities than the people you read about in People magazine. To me, they're the vanguard of food and dining culture worldwide, so it's such an honor to be recognized by them and to hear them say, "These are great cocktails, and these oysters — the selection is unbelievable." I think for us it's just a testament to how hard we've worked as a team at Maison Premiere to develop that following.

What's your least favorite drink to make? Eh. I would say that my purpose behind the bar is to make whatever it is that my guest wants. And sometimes that may require jumping through a hoop, and a doing a hop, skip and a jump, but I'm always obliged to do so. So, as long as we have those things available, I will do everything I can to make sure that my guest receives that drink.

Tell us about your first bartending job. Well, my first barbacking job was at a Mexican club in my hometown of Tucson, Arizona, and I did some other barbacking there. My first real gig behind a bar was at a dive in Red Hook called Bait and Tackle on Van Brunt and Pioneer. I still go back there — it's a great place, a great dive. The bartender was out, and I was hanging out there, and they all knew that I was chomping at the bit to get behind the bar, so they let me fill in once or twice.

Have you ever had to cut off a customer at Maison Premiere? Yeah. [Laughs] It happens at every bar.

How do you do that? If someone's behavior is effecting everyone else's enjoyment, that's usually the time that you have to start paying more attention to how extreme it is. And if it gets to a level where it's causing other people to not enjoy their time, then usually that's when you're going to want to step in. Cutting people off doesn't always mean having to push them out the front door, sometimes it just means guiding them through their night, helping them. Well, you know, nobody likes to be told that they've had too much to drink.

What's your most important bartending tool? For equipment I would say one of the best tools you can have is water. Water is a really important ingredient. You need it for everything, not just on its own, but for making drinks. For tools, a spoon — I love having my spoons. Jiggers are also really important, because you can measure almost anything with a jigger. As a personal or philosophical tool, it's always important to remember that you never know who you're talking too, and in that sense you should always treat every guest like they're a VIP.

Have you learned any valuable fix-it tips as a bartender? I've learned to treat electronics with care. You never want to have your computer go out on you in the middle of a Friday night. You definitely want to make sure that you're treating the space that you maintain with a lot of love.

What's the best thing to order at Maison Premiere? Well, I mean definitely our oysters. Our oyster happy hour is a pretty cool thing — it's Monday through Friday from 4 to 7 PM. So it's 20 different oysters during the happy hour that are all one dollar, and then after that we go up to about 30 to 35 oysters at the market price. And we also have a beautiful ceviche, our lobsters are probably the best I've ever had, the crab legs are excellent, and soon we're going to be getting caviar. We have a couple of good champagne drinks — the Maison Champagne Julep is excellent. Another one is is the Arnaud's French 75. In New Orleans there's a great bar called Arnaud's French 75 Bar, part of the Arnaud's restaurant, and they have a famous French 75. In New Orleans they do it with cognac instead of gin — it's actually a really classic style. I called up my friend who is the head bartender down there, his name is Chris Hannah , I keep in touch with him very closely because he's the sort of beacon of knowledge for all things New Orleans drinks-related. So he sent me over their specs, and we recognize them on the menu, we try to do it justice. Has he been here yet to try the French 75? No, but we're trying to fly him up here to do a shift or two. He's a really cool guy, we're looking forward to having him over here.

When you're not at Maison Premiere, where do you go for a drink? In my neighborhood — I live in Prospect Heights — there's a local that I like to sneak into late at night called Washington Commons. They've got some nice beers on draft, they've got a couple of whiskeys, and they're usually playing a really good movie. It's kind of a cool place to go.

And what do you like to drink on your days off? If I am drinking on my day off, it kind of depends what I have going on. Sometimes I enjoy drinking at home, sometimes I might like to link up with a couple of my bartender buddies, and sometimes that means visiting other friends behind their bars, or going to some dive and hanging out and playing pinball and watching football or something. We're pretty simple. Bartenders aren't really that?we like to play the sophisticated roll a little bit, but I think that's all part of the show for everyone.

· All Coverage of Maison Premiere [~ENY~]