Shills for The Burger Guru, Salinas, and Tandoor Palace

Share All sharing options for: Shills for The Burger Guru, Salinas, and Tandoor Palace 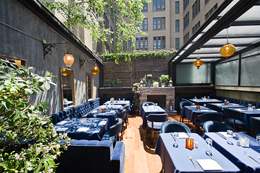 Tandoor Palace would be a nondescript Fulton Street lunch spot if not for a strange crop of both extremely positive and negative Menupages reviews. Says a tipster, "I gave it a shot once because it's so close to my house and I love Indian but it was so bad; it actually offends me that this place has been open for so long." Here's what one commenter (who, like all the other positive reviewers, really likes the delivery and portion sizes) had to say:

This place is such an amazing find! I'm just so glad I tried it. I got delivery, and it was speedy, fast, huge portions, and extremely well priced. The saag-paneer was fabulous, and the garlic naan is to die for. The delivery comes with a huge portion of rice, side veggies, and sauce. I really urge anyone who likes indian to try it!

The almost two-month-old Spanish restaurant Salinas has already garnered a crop of mediocre to poor Yelp reviews, except for one raving 5-star, 644-word review by the way of a "Rafi D.", who seems to have a Yelp profile that checks out as somewhat legit. Some excerpts:

Salinas is a great DatePlace. It's beautiful, cozy (the garden has a fireplace!), and the staff is so warm and welcoming. We were greeted with a smile by every person we encountered and the chef came out at one point to ask how everything was. The prices are reasonable (our bill was a little under $120) and the food is amazing. We were there for a special preview so the restaurant wasn't quite ready to be open to the public, but I'm pretty sure their official opening is this weekend. If you're in the area, make yourself a reservation; you won't be disappointed.

The Mussels were absolutely perfect. The marinade was light and just acidic enough to complement the dish, with a perfectly-seasoned tomato-flavored base. The Quail was outstanding--easily one of my favorite things I've eaten all year.

The main courses (where this really seems to look like the meal of the year):

It [chicken] was prepared perfectly and the chicken was the juiciest chicken breast I have ever had. I've never had a chicken breast melt in my mouth and it was amazing. The Strip Steak was a huge portion with just the right amount of seasoning and cooked right to my specifications--medium well with a proper amount of pink the center...Again, all prepared perfectly and halfway through the year, it's the best steak I've had in 2011...You will definitely not leave hungry.

The French Toast is an assault on all of your senses. The presentation is beautiful and it smells amazing. The toast is soft and moist, topped with a crunchy, caramelized sugar. The gelato melts into the toast, so every bite is a mixture of soft and sweet, hot and cold...a truly delicious way to end a fantastic meal

The Yelp page for Williamsburg's The Burger Guru already has 18 filtered reviews, but a few dubiously positive reviews seem to have made their way through. Yelper "Veronica T.", who has two other reviews to her name (both trashing other Williamsburg burger joints - "Teddys burgers=poop!"), gives us this five-star gem:

I decided to try this place with my boyfriend over the weekend. I have acquired a pallet for good and healthy food with makes me extremely picky and hard to please sometimes. So when I am satisfied I tip my hat off to the place.

First of all the place is really really cool looking and very eclectic. I asked somebody that appeared to be the owner, where he got the bar from, he replied, "I made it from rechecked Christmas tress.". I thought he was kidding, but then I took a better look and saw he was not, now that's creative!!! The bar is the focal point of the store, it's awesome, the color scheme and the energy put me in a good mood automatically. The staff was nice and nice looking as well (I was almost sorry I went there with my boyfriend). We proceeded to be seated in the backyard in what seemed to remind me of Florence, Italy. Very serene and relaxing. Finally we ordered, I got the veggie burger and stuffed zucchini, my boyfriend the spartacus burger with French fries. The veggie burger isn't good-it's orgasmic!!! I have never ever eaten a better veggie burger, and I am a pain in the ass. The stuffed zucchini was also delicious. My boyfriend loved the spartacus burger as he scarfed it down. I asked the owner if they had liquor yet, he said soon. This place was AMAZING!!!! I live in the area so I will definitely be a regular.

· All Previous Editions of Adventures in Shilling [~ENY~]