The History of Keens, The 126 Year-Old House of Mutton

Share All sharing options for: The History of Keens, The 126 Year-Old House of Mutton

Every once in a while we like to take a look at the rich history of a restaurant that has survived for generations, outliving trends, critics, wars, Prohibition even. Today, Keens Steakhouse. 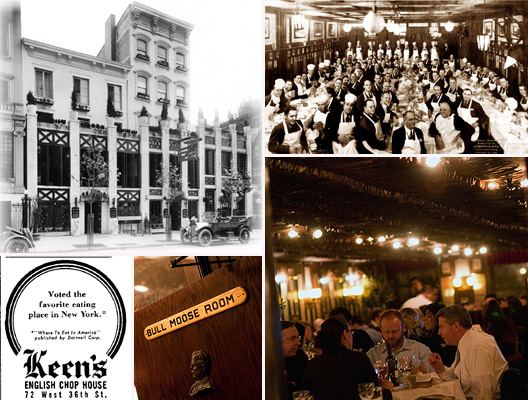 [Photos courtesy of Keens and Krieger]

These days, whenever an old or simply beloved restaurant is on the verge of shutter—think of Gino, Elaine's, even Savoy—the outrage comes on hard and fast, both from regulars and more often than not, those who long ago left the restaurant for newer, flashier models. The fans and the restaurant historians clamor for someone, a savior, a philanthropist to swoop in and save the icon. In 1978, those historians got their wish with Keens Steakhouse.

The restaurant was on the verge of closure, rocked hard by the economic crisis and long since faded and dated. But George Schwarz, the owner of the clubby and successful One Fifth (where Keith McNally got his restaurant world start) and Elephant & Castle, came in and, with his artist wife Kiki Kogelnik, pulled the restaurant back from the brink. They invested over $1.4 million and three years into renovations. They put in new air conditioning and floors, raised the basement's ceiling, lengthened the bar, cleaned every artifact, and re-mounted the pipes on the ceiling. It entered the new era that it still inhabits today.

And here's why it was worth it.

Keens Chophouse was founded in 1885 by Albert Keen, a theater producer. The restaurant was first a part of the Lambs Club, the famed theater group (after which the Geoffrey Zakarian restaurant is named) that was founded originally in London, and Keens was manager. Keens opened independently in what was then the Theater District, Herald Square. Located right next to the Garrick Theater, actors would often sneak in the back entrance in full makeup for a drink during intermission, and its famous Pipe Room soon became a hangout for writers and publishers in addition to theater-folk for smoking, drinking, and dining on mutton chops.

For $5 a year, Lambs Club members could keep their pipes, the long ones pictured, at the restaurant, where a pipe warden would keep an inventory and pipe boys would bring the pipes to each table. They were, and are now, stored on the ceiling and number over 90,000, the largest collection of such pipes in the world. According to tradition, when a member passed away, the stem of the pipe would be cracked.

As the years wore on, Keens grew into a proper restaurant and a destination for group meals and a haunt of famed people of the day including JP Morgan, Teddy Roosevelt, and Babe Ruth. The artifacts that line the walls now have been collected from the beginning and number in the 500s. The collection includes pieces of theatrical memorabilia from the Lambs Club days and beyond, including what is said to be the Playbill that Abraham Lincoln was holding when he was shot, postcards, lithograph billboards, political cartoons, an English coat of arms, old photographs, and more. The pipes from the most famous patrons, including Ruth, Will Rogers, Adlai Stevenson, and Albert Einstein, are displayed in cases in the front.

One of the biggest changes to the restaurant, before its modern revamp in the 70's, was its admittance of women —which did not come easy. In 1905, Lillie Langtry, an actress and onetime paramour of King Edward VII sued the restaurant for refusing female entrance. She eventually won, and the restaurant put up the sign "Ladies are in luck, they can dine at Keens." Now she has a room named after her. 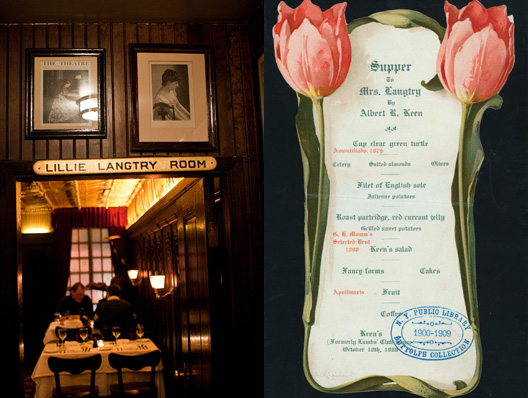 In 1935, the restaurant sold its one millionth mutton chop, a signature dish that is still the star of the menu. Keens fans know it's no longer made with mutton as it was in the 30's. According to longtime manager Bonnie Jenkins' account to Frank Bruni, after WWII, Americans tired of eating mutton and getting fresh, high quality meat became less and less possible. So at some unknown point in the late 40's, the restaurant switched to lamb "choosing a cut with a winged shape that mimicked the mutton chop of yore." 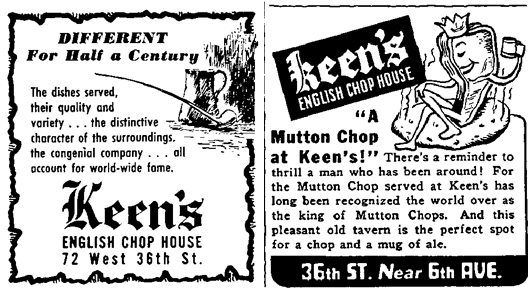 Mutton isn't the only draw of course. Jenkins tells Eater that they store filet mignon, lamb racks, and prime rib alongside the short loins and strip loins (which are aged for three weeks onsite) in their dry aging room. The room holds about 20,000 pounds of meat, more in the winter and less in the summer. They've also long been known as they are now to make a mean cocktail.

Keens soldiered on from the mid-century and began to fall into disrepair by the 60's. And by the mid-70's it was facing closure.

Which brings us back to Schwarz, a radiologist restaurateur, who thought he would end up sinking $30,000 into the project until he actually bought the building and started poking around. Jenkins says of the renovations 30 years ago, "Lunches returned in July of 1981 and dinners in August of 1981 and then Keens was fully operational and has remained so since, and we hope it will be doing so 100 years from now." Schwarz still owns the restaurant and when he's not there, he checks in with Jenkins every day.

References:
· Back of the House: Keens Steakhouse [Edible Manhattan]
· Where Lore is Part of the Lure [NYT]
· The History and Stories of the Best Bars of New York [Amazon]