Share All sharing options for: The Queens Kickshaw's Ben Sandler and Jennifer Lim

Welcome to Eater Dream Journal, where we ask chefs and restaurateurs to write down their dreams for a week and then share them with us. Today, Ben Sandler and Jennifer Lim, proprietors of The Queens Kickshaw in Astoria. 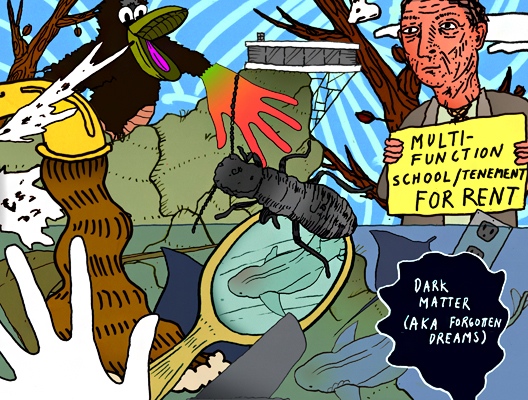 Night 1: I was able to levitate and fly, and reached above treetops and 2nd floor windows. I was working very hard to get the word out about a church or non-profit selling church-y antiques.

Night 2: Was with a group in a tour bus arriving in warm-climate cliff house, as a vacation. A big black hairy furry annoying bird was present, and I had to avoid eye-contact or else it would trap me by telling long irritating stories. Our group was also standing under a huge rainbow/multicolor umbrella to avoid being shat on by many birds.

Night 3: In a bay of Tokyo, there's a sunken battleship circled by giant rays, nurse sharks, great whites, and whales. Only shadows were visible from so high above (was standing on a huge cliff), but I was using a mirror to highlight the shadowy shapes as I called out their names to my companion.

Night 4: Stigmata on both hands, as a result of a giant black termite sticking its needly horn into me. It was trapped in a clear glass bowl that had a crack.

Night 5: I dreamt but forgot.

Night 6: I was in the 1930s when men had multi-day stubble on their faces and lean, hungry looks about them. It was a multi-room structure made of a lot of clapboard that functioned as school and dirty crowded apartments.

Night 1: "If the barista sees that the water is running brown, I wonder if he'll know that it is because the city was cleaning the water main last night - and what if they dislodged something inside and the pipe into the building gets clogged — maybe then they'll have to fix the water pressure and I can get my money back on the water pump."

Night 2: That's strange. That outlet is not supposed to be there. We wanted people to have a place to plug in their laptops in the back, not by the front window. I hope no one else has noticed this yet.

Night 6: Server: "This sandwich is missing the dill on top" Me: "The proper term for that is "a dilly"

Note: it's hilarious but this actually happened the next day!! Our server asked Ben about a sandwich that needed some dill on top of it, and this caused Ben to remember his dream.