Romania's Ambassador on Her Love of Ribs, Cherries, Adour

Share All sharing options for: Romania's Ambassador on Her Love of Ribs, Cherries, Adour 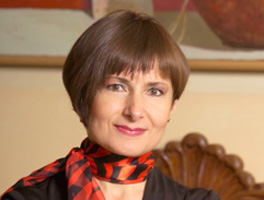 Ambassador Simona-Mirela Miculescu has had an impressive and varied diplomatic career. Prior to her appointment as Permanent Representative of Romania to the UN, she was the Director of the Department for Communication and Public Diplomacy within the Ministry of Foreign Affairs. Since her appointment in New York, Amb. Miculescu held the positions of Vice-President of the UNICEF Executive Board, Vice-President of the Assembly of State Parties to the International Criminal Court, Member of the Bureau of the Francophonie, and will be chairing the Special Political and Decolonization Committee of the General Assembly, during its 66th Session. However, she found some time in her busy schedule to discuss the New York City dining scene, her love of cooking, and suggestions on where to find great Romanian food (spoiler: Queens).

Have you been able to find traditional and good Romanian food in New York City? I am happy to say that I have been able to find great Romanian food, not only because New York City is a really wonderful Babylon, the only city in the world where you can find absolutely any cuisine you want, but also because the Romanian-American community is very well organized here. The food shops and restaurants—located mostly in Queens—are very good, keeping up the traditional tastes and flavors.

What are some of your favorite dishes of Romanian cuisine at the Romanian restaurants in the city? I love to have everything that I cannot cook because it needs lots of time for preparation: the nice appetizers that include dips made from white beans and garlic (fasole batuta), charbroiled eggplant (vinete), roasted vegetables (zacusca), and caviar spread (icre); the best but most time-demanding ciorba (thick soup) - the tripe soup (ciorba de burta), served with mujdei (garlic puree) and a splash of vinegar; the aromatic and juicy mititei, or skinless Romanian sausages, served with crispy fries, that pair well with salad or pickled vegetables (muraturi); the delicious stuffed pickled cabbage rolls (sarmale) that go perfectly with polenta (mamaliga) and sour cream (smantana); or the unparalleled little islands of sweet cottage cheese, caressed by melted butter, and filled with jam (papanasi).

Is it comparable to what you can get at home? All the meals I had in the Romanian restaurants in New York – either at Harmony Terrace, Romanian Garden, Bucharest or Transylvania – are wonderfully similar to what I can get at home. This is because the Romanian-Americans cook and produce foods very carefully, based on the old traditional recipes. They sometimes focus on the authenticity more than us at home, because we are still too obsessed about the “international touch” of food, after so many years of communism when everything that was international was forbidden.

What do you like to eat around the UN and your embassy? I cannot say that there is much diversity around the UN, but Nino’s Positano restaurant has some excellent grilled calamari salad, while around my Mission I always enjoy the flavors and rhythms of Sinigual.

What do you crave that New York City just doesn't have? My favorite fruits are the sour cherries, and I cannot find them easily here. Plus, I don’t have the time to look for them. That is what makes me miss the sour cherry tree in my mom’s garden even more. Then, not even one of the hundreds of sorts of cheese you can find in this city can compare to the Romanian homemade sweet cheese (urda)?

What New York City restaurant do you miss when you go back home? It is so difficult to mention one restaurant! There are so many incredible restaurants in the City. Whenever my guests from Bucharest ask me which is my top five I have difficulties in stopping enumerating them. But I mostly miss, when I am out of New York, the fusion restaurants, such as Asia de Cuba, and the Vietnamese ones such as Saigon Grill.

What's your favorite comfort food to eat in New York? All those delights from the sumptuous five-course tea at Lady Mendl’s Tea Salon, combined with its sublime elegance.

Do you cook Romanian food? Of course I cook Romanian food, although time is my enemy. But, sometimes, when I manage to enter the kitchen, no one can do better sour soup with meatballs, green peppers stuffed with meat and rice in tomato sauce, or apricot dumplings.

Tell me a bit more about the cuisine of Romania, what are some of the national dishes, and ingredients regularly used? The cuisine of my country is unknown to most of the people, but I remember that the well-known French explorer Jacques Yves Cousteau, said, after discovering it in one of his favorite places on the earth – the Danube Delta - that ‘not only the world doesn’t know almost anything about Romania, but that the Romanians don’t know their miracles. As a cuisine, at least, you are a very rich people in our so called poverty’.

I think that our cuisine is the perfect illustrated history of Romania, whose territory was either occupied or dominated by different nations along the more than 2,500 years of history. It is a blend of all the cultural heritages left behind. Our recipes might not be original or unique, because after all we are part of Europe and have always been. But even the recipes we got from others, we made them our own, to the point you don't even recognize what could they have in common, besides their names. Our musaca, stuffed cabbage rolls, pancakes, soups and meatballs might not have been “ours”, but they are "sediments" of the Ottoman occupation, or French, German, Austrian, Greek, and other influences. We made them our own, discretely arranging the original recipes, tailoring them, giving them a unique flavor with our own spices and ingredients.

What's your favorite expense account restaurant? Adour by Alain Ducasse Restaurant is always for me a classy and beautiful journey, from all the points of view: from the deliciously refined cooking to the exceptionally sophisticated architecture of the St. Regis Hotel. I like very much Monsieur Ducasse’s philosophy: "A turbot without genius is better than a genius without a turbot."

What's your favorite cheap eat? The toasted bagels and the soups from a small but cute Café called Delectica, across the street from my Mission.

Are there any American specialties you've grown to love? Ever since my first posting in the US, when I served as press secretary of the Romanian Embassy in Washington DC, I have been enjoying tremendously the best American specialty: the ribs. The best that I've had in New York City were at the Jazz Standard Club, also because the combination of excellent ribs and fabulous live jazz is my favorite of all.
· Sri Lanka's Ambassador Loves Spice Market, Sunrasa, Megu [~ENY~]