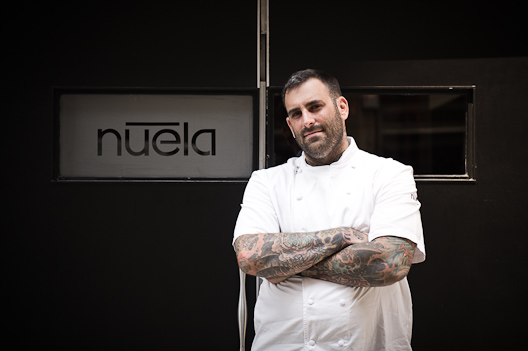 Sprawling pan-Latin restaurant Neula opened last July after years of delays and one big personnel change. The project was originally intended as Douglas Rodriguez's New York comeback. When he backed out, Adam Schop was tapped to be chef and partner, at Rodriguez's recommendation. The early word was mixed: some critics loved Schop's big flavors and inventive preparations, others thought it needed some work. But Adam and his team have made a lot of changes since last summer, and he feels very confident about the direction the restaurant is going in right now.

Adam Schop, Chef and Partner: For me, it was just a dream to come to New York City and to be a part of one of the best dining scenes in the country. Over time, Doug had other opportunities and conflicts, and he was unable to continue with this project, so that afforded me the chance to be the chef and partner of this restaurant.

Did this project change when you came on? Yeah, and I think it's a constant change because you try to go with what works and do more of it. So when we first started off, we were looking to be a little more of a dining destination place, and before we opened we definitely switched gears to a dining style of a lot more small plates and more accessible dishes with a lower check average.

Was that a reaction to the economy at the time? Yeah, but to put so much of a burden on the economy is not really a responsible way of thinking. I think using that as a gauge to help make decisions for the clients is more responsible. I definitely wanted to make it more accessible so more people could come into Nuela.

How was the build? There's something funny about that. We got a lot of guff, especially from the press, about the amount of time that it took. It really didn't take a long time to build out, but it did take a long time to negotiate, to be able to move in and do all that stuff. I would say that it was a typical opening aside from the fact that we were in the space for a little bit longer than usual before we agreed on a design.

How was the opening? I think opening week was quite successful — we had a terrific amount of traffic. I think it was a welcome addition to the Flatiron and 24th Street. We opened up and for the first couple of months we pared down the menu. A lot of folks thought that we had a long menu, so we consolidated and kept some of the stronger dishes, and here we are today, one year into it, and we're still learning. We're still moving towards trying to give guests everything that they want and like.

What was the review process like? It was great, it was humbling, and I think it was overall quite accurate. I think it helped define us in the months to come. Right after, we were just trying to take it in and internalize it. And then you get to the point where you adjust a few dishes based on a general consensus. Overall, we think we made things better.

What were some of those changes? We increased the proteins almost across our entire menu. We felt that we were doing a great job, but we wanted to do a better job and offer more value. You can see it as a trend with a lot of restaurants, when they say that they're offering comfort food — I think that's just really a euphemism for better perceived value for your guests.

How's business these days? After one year, business is great. We're lucky to make it a year, I think it's a great feat. We have an amazing team, and we look forward to year number two.

What's next for Nuela? Since we've been open a year, I brought my entire management and kitchen team to Peru to experience the cuisine. I just got back from my second trip there with one of my other chefs, and we look forward to innovating and keep pushing forward the cuisine that we have.

Do you have a projected opening date? It ain't even close. [Laughs] I'm not going there again. We do have a space, we have no plans on releasing an opening date, but it is hopefully going to be sooner rather than later.

Does it feel like it's been a year? It feels like 19 minutes. It went by really quick.

Do you still like New York? New York city is a great place to be, and I'm proud to be here.

Check out a new video of Adam making his duck paella here.