There are frequently gossip items about certain individuals who love nothing more than spending obscene amounts of money in nightclubs, so it seems important to know who they are in case you ever happen to run into one of them. Welcome to Whale Watching, an infrequent examination of these customers that nightclubs covet. First up: Don Johnson. 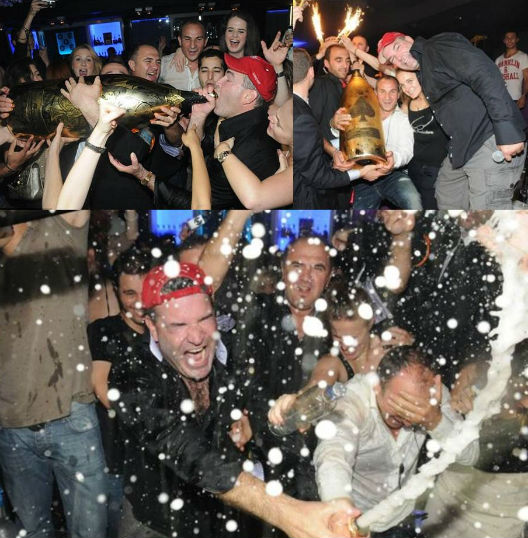 WHO— Don Johnson, CEO of Heritage Development from Wyoming
AGE— 49
CLAIM TO FAME— Johnson, who runs a technology company focused on horse racing wagering, became well known when he won over $15 million from various Atlantic City casinos in an epic gambling streak earlier this year.
NIGHTCLUB FUN— After winning his ginormous bankroll, Johnson has gone on a bottle buying spree on both sides of the pond. He made a splash in London with a £168,118 ($274,232) tab at the One4One lounge, including dropping $190,000 on a single bottle of Champagne.

He then showed up in Las Vegas and dubbed himself Don "Motherfucking" Johnson and proceeded to spray the crowd with a 15 L bottle of Champagne, which made the idiots in the desert go wild for his wasteful ways.

Now Johnson has returned stateside and is spurring the New York economy with his insane spending. He first celebrated the U.S. Women's Soccer Team's second place World Cup finish by sending over a 15 liter bottle of bubbly to a few of the players who were partying at Avenue on Monday night. Johnson showed up at SL the next night, where he reportedly spent $50,000 on booze and hosted a bikini contest where the winner received a trip to Ibiza. It makes you wonder just who are these people that entered a nightclub bikini contest and why someone would spend so much money on a few bottles of booze when they could simply cover the entire bar's drinks for one night and get everyone plastered? He must really love sparklers.

Anyway, if you happen to see this man at a nightclub, try to position yourself as close as possible to his tables to hope you get sprayed with some of his overpriced booze.
· Nightlife Coverage [~ENY~]
[Image via Daily Mail]