A Parade of Sommeliers at The Dutch

Share All sharing options for: A Parade of Sommeliers at The Dutch 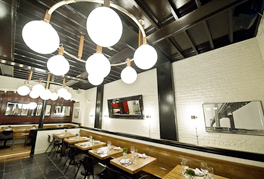 At The Dutch it’d be a shame to order wine without consulting the sommelier. It is perhaps the best-stocked restaurant floor in Manhattan right now. Heading up the team is Josh Nadel, who cut his teeth in the early part of the noughties at Veritas, where Tim Kopec molded him into a model sommelier. From there he went on to Cru, where he rode the remaining portion of that restaurant’s pit right into the whitewash and dipped out before it hit the shore. He eventually ended up at chef Andrew Carmellini’s first restaurant, Locanda Verde, where he fashioned a short but sweet list of Italian wines.

At Carmellini’s second restaurant, The Dutch, he's working with a larger, international list and an all-star crew to back it up. Colin Alevras—a longtime industry veteran and most recently the Beverage Director for the Momofuku Restaurants—is by his side at Service Director. (Nadel jokingly calls him a “friend with benefits,” since his position isn’t generally occupied by someone with his level of beverage experience.) At Bar Manager there’s Chad Walsh—former sommelier at Aureole—and completing the line-up as floor sommelier is Scott Cameron, most recently of Alto.

It’s a parade of wine nerds that you’d do best to join.

Nadel’s general stylistic principle is simple here: stay away from too much oak or too much tannin in trying to pair the list with Carmellini’s catchall interpretation of American cuisine. What we end up with is a lot of interesting cool-climate whites and reds. But the list is careful not be prejudiced against those just looking for something that will stain their teeth. For them, there’s a good grip of new and old world wines that are made for the strong-willed and red-flesh inclined.

For all of us on a budget, there's a strong selection of wines under $75, and for the folks looking to throw all of their chips in, there’s a two-sided reserve list—dominated by dusty offerings from well-known names—available upon request.

As a whole this is a complete list that’s striking in its ability to include everything from craft American spirits, to Madeira, to sherry, to California chardonnay and still feel controlled and intimate. There’s a good group of wines that just about everyone who’s been to more than a few restaurants will recognize, but there are also corners of the list that will likely require a guide. Thankfully, at any given time, you’ll have four to choose from.

It's a rare casual restaurant that aspires to four-star wine service (there are separate fridges on the floor for white, red, and sparkling wines to ensure proper serving temps, for one). Here that aspiration, coupled with a well-curated list of wines, spirits, and beers, offers the diner a great opportunity to confidently take a trip outside the box.

Bang For Your Buck
Mantinia 2009, Tselepos $45
Mantinia is located on the Peloponnesian Peninsula on a plateau about 3,000 feet above sea level. Here the name of the white wine game is moschofilero, a pink-skinned variety that yields aromatic, floral white wines with searing acidity. This is a classic example from one of the region’s most established quality producers.

Sauvignon Blanc 2007, Mayacamas $45
Easily one of the best domestic sauvignon blanc bottlings out there. Sourced from some of Napa’s highest altitude vineyards and reared by one of California’s most legendary producers. A small production cult find that is practically endangered out east. Generous pricing to boot.

Riesling Vieilles Vignes 2007, Boxler $65
Boxler is responsible for some of the most interesting wines out of Alsace. The ‘07 old vines bottling is an excellent intro to Alsatian riesling. Flowers, stone fruit, and great minerality. Drinks well on its own but a good match with lighter fare.

Under $40
Bourgueil ‘L’Expression’ 2009, Domaine Joel Taluau $35
This is all juicy cabernet franc fruit from a relatively small family-owned property in the oft-overlooked Bourgueil appellation. Vinified sans wood and meant to be consumed young. All aromatics and exuberant fruit.

Crowd Pleaser
Zweigelt 2009, Paul Achs $55
This is traditionally produced zweigelt that has a bit of a funky edge, but enough pure, bright fruit to keep everyone happy.

Off The Beaten Track
L’Ile de Beaute Rouge 2009, Domaine Gioielli $75
This blend of 50% niellucciu (sangiovese) , 25% aleatico (native grape grown throughout Italy, mostly in Lazio and Puglia), 25% merlot grown on a sparsely populated peninsula on the Northern part of Corsica. Winemaker and proprietor, Michel Angeli (a name that exhibits well the Italian and French heritage of the island), has worked the land for six decades and continues to make unique, traditional wines. Fresh, herbal, mineral-driven.

Break The Bank
Riesling Grand Cru ‘Brand’ 2004, Boxler $120
This is archetypal riesling that exhibits the singularity of the grape grown in Alsace. Still has miles to go, but shows enough forward fruit and exuberance to drink well now.

Blanc de Blancs Brut Grand Cru NV, Jose Dhondt $110
Dhondt Champagne is not exactly easy to find around town, but if you manage to get your hands on a bottle, it’s easily some of the best value Blanc de Blancs out there. The Dhondt’s have been growers in Champagne for generations and have been bottling under their own label since the 1970s. This is traditionally produced, mineral-driven bubbly.

Nuits St. George 1er Cru ‘Forets’ 2001, Domaine de l’Arlot $190
There are some heavy-hitting red wines on the reserve list, but this is the best bet under $200. L’Arlot’s wines are reliably elegant, classic renditions of pinot noir. This is just starting to show some age and should show well with a brief decant.

WTF?
The Burgundy selection on the main list nearly pledges allegiance to Fourrier (9 of 20 wines featured hail from this estate). These are excellent wines, no doubt, but a bit more variety (in both price and producer) would make the section more dynamic.