How to Pose for a Chef Photo: Seven Hot Looks

Share All sharing options for: How to Pose for a Chef Photo: Seven Hot Looks

If you're a chef who spends most of the day toiling in the kitchen, a photo-op can be a scary proposition. But, if that chance for a bit of media exposure does come your way, there's no need to fear: the work has already been done for you. Here are seven sure-fire chef looks for in front of the camera, time tested by some of the city's hottest cooks.

Are you a gentle soul? Posing with a scary kitchen knife will add some edge to your look. The bigger the better, just don't act like it's anything out-of-the-ordinary.

Instead of sitting in a chair the correct way, consider flipping it around and leaning on the back. This shows that you're serious about your work, but you're not a jerk or anything, kind of like that that cool high school English teacher that told you, "Shakespeare is like hip-hop, but without the beats."

For a bit of visual panache, pretend as if your head, arms, and legs are being guided by invisible strings. 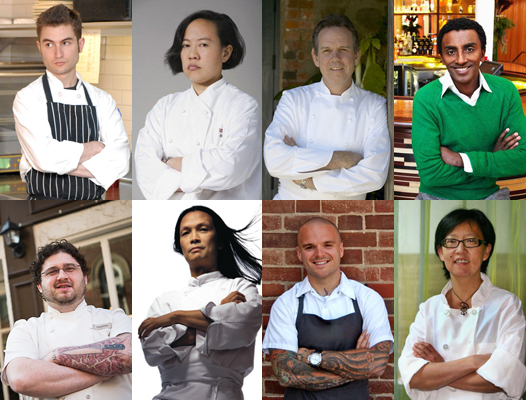 Every big chef has used this pose, and for a good reason: if your arms are crossed, you're the boss. This look is especially effective if you are a chef who recently became a restaurateur.

Are you afraid that people think you're a softie? Then cop this look. After all, as a chef, you don't just fill profiteroles with delicious whipped cream, and put demi glace on farm-fresh bobo chickens — sometimes you also have to trash talk with your line cooks, and place angry phone calls to purveyors who are late on their deliveries.

This look — wherein a piece of meat or fish is held up to, or draped across your person — is best left to the elder statesmen of the culinary world. And Josh Capon.

Too Cool for School:

Or just say screw it — put on some shades, turn your head away from the camera, and act like no one's taking your photo. You're a cook after all, not a movie star. Nobody cares how you look as long as your food is good and your restaurant is cool.

· All Previous Editions of Hot Looks from Hot Cooks [~ENY~]